The letting and investment deals concluded during 2021 reflect the positive positions of the office and industrial sectors and the favorable prospects for the hotel sector, despite a difficult period given the various lockdowns. Questions remain, however, over the medium- to longer-term position of retail. Sustainability accreditation and ESG matters are playing an increasingly prominent role in both the development and investment markets.

The office sector accounted for 80% of investment activity in the first half of the year, according to consultancy Avison Young Hungary. The CEE developer and investor GTC has invested EUR 160 million to acquire the LEED “Gold” accredited 20,000 sqm Ericsson headquarters and the 21,500 sqm Evosoft HQ in South Buda, both from Wing.

The transaction fits in with the aim of Wing to become a regional player as it focuses its activity on development and investment in CEE, partly through its Polish subsidiary, Echo Investment. GTC also acquired the 15,500 sqm Váci Greens Building D, developed by Atenor and sold to a Hungarian private investor.

“GTC’s very strong ‘all-out attack’ is very interesting: Their purchase of the Infopark buildings from Wing, the purchase of two buildings in the Váci Corridor (Váci Greens D and Váci 188), and the only Class ‘A’ quality larger office building in Debrecen, Forum Offices, will make it an extremely strong player on the office market,” comments Valter Kalaus, managing director of Cresa Hungary.

The largest single asset transaction of the year was the purchase of Váci Greens F by a domestic closed-end fund from Atenor, after a prolonged process that carried over from 2020. Another investment transaction of note was the acquisition of the earlier generation BC 140 by the U.K. investor Resolution Property from German asset manager DWS. This is the third office purchase by Resolution Property after acquiring the Margit Palace and Buda Square buildings, totaling 37,000 sqm, from Adventum.

In an unrelated transaction, CBRE represented Wing in the disposal of four office towers at Infopark, representing 49,000 sqm, to Sky Green Buildings.

In a regional transaction of note, the Hungarian investor, Indotek Group, announced it is to purchase GTC’s Belgrade office portfolio for EUR 267.6 mln. The agreement covers 11 buildings within five business parks and a total of 122,000 sqm of space. Once completed, the deal will become one of the most significant real estate transactions in the last five years on the CEE market, according to analysts.

The overall vacancy rate of close to 10% is expected to increase further. However, the relatively small pool of Hungarian and regional office developers operating in Budapest has been undertaking restrained development policies for several years and oversupply is not expected. Planned office projects are going ahead, although the leasing process can be more protracted, according to developers and consultants.

IBM Hungary has signed for 14,500 sqm of space to establish its new headquarters at the Corvin Innovation Campus, part of the Corvin Quarter urban regeneration project. This is is the first office building in Hungary to obtain WELL certification; the complex has BREEAM “Excellent” and WELL “Platinum” certification according to Futureal Group.

Elsewhere, the 14,000 sqm Nordic Light Trio, developed by Skanska and sold on to investors, has obtained WELL “Gold” accreditation. The 12,500 sqm Szervita Square Building by Horizon Development has received a LEED “Platinum” environmental rating, making it the first (and thus far only) mixed-use property in CEE accredited at this level, according to Horizon.

A number of developers are committed to building offices to WELL standard: 26 projects now have WELL registered, pre-certified or certified status according to the Hungarian Green Building Council (HuGBC).

Wing and RTL Hungary Television have signed a long-term lease agreement for nearly 9,000 sqm of space at the Liget Center and Liget Auditorium opposite the Város Liget. The renovation and redevelopment of the historic complex will be tailored to the tenant’s needs; RTL Hungary’s headquarters and news studios will move into the complex in 2024, according to Wing.

The leading serviced offices provider New Work has established a 2,000 sqm office at Science Park building. With a 68% occupancy rate, the company now has 11,000 sqm of space in Budapest. That will grow to 20,000 sqm in 10 locations, according to Hubert Abt, founder and CEO of New Work Offices. Contracts have been signed with access4you for the operation of the flex offices.

“Although everyone is talking about industrial projects leading the way in 2021, in fact, they did not rule the investment market in our country. The Hungarian property investment turnover was much more defined by the office sector, representing circa 80% of transactions,” says Csaba Zeley, managing director of ConvergenCE.

“For us, naturally, the most important deal of the year was the sale of Árpád Center to Investum. Since its purchase in 2019, we have turned the then undermanaged building into a fruitful asset. We have renegotiated existing contracts, leased the vacant spaces and forged strong relationships with our tenants. As a result of these and the buyer’s fast decision-making process, we managed to sell the building off-market, ahead of the date scheduled in our business plan. We were also happy to have been mandated with continuing the management and leasing duties. This proves that well-managed and well-maintained buildings at great locations increase their value and can arouse investor appetite,” Zeley adds. 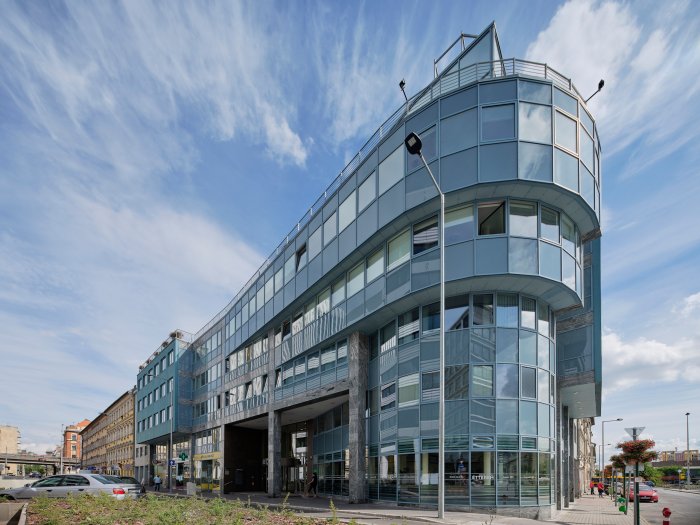 The Árpád Center, subject of an investment transaction.

Total modern industrial stock in the Budapest area stands at a little more than 2.5 million sqm, according to the BRF. The overall vacancy rate in the industrial market of less than 4%, and the sector has been attracting developers new to the field.

The initial phase of HelloParks Maglód, part of the Futureal Group, has been occupied by its first big tenants; the design stage of the complex has received a BREEAM “Excellent” certificate. The company is developing three mega parks with a total capacity of 884,000 sqm of warehouse and industrial space on 219 hectares. The total investment value exceeds EUR 140 mln, according to Futureal.

The new Hall D3 of the East Gate Business Park by Wing, with a total area of over 9,000 sqm, reached 100% occupancy in 2021. Wing has also signed a long-term lease agreement for 5,000 sqm of fully tailor-made warehouse space in Login Business Park with Packeta, one of Europe’s leading logistics providers.

Colliers has sold a 30,000 sqm industrial complex as part of a nine-hectare site close to Veszprém to the Austrian automation company Knapp. Colliers Hungary also represented GLP Hungary in leasing 43,000 sqm of warehouse and office space to the Fiege Group, a European logistics company, in GLP Sziget in Szigetszentmiklós.

The hotel sector has been severely hit by the lockdown and restrictions on travel following what had been a boom period for the CEE hotel markets. A pick-up in the hotel market that would again make the sector attractive to investors is not expected until at least spring 2022. There is a substantial hotel pipeline with more than 2,000 rooms in the active pipeline across Hungary, according to CBRE. More than 1,000 rooms were due to have been delivered in Budapest by the end of the year.

DVM group has started construction work on the Drechsler Palace on Andrássy út. The listed building, also known as the Hungarian State Ballet Institute, is owned by the hotel developer and investor QPR Properties and will become the first “W” brand Hotel in Hungary.

Wing and Accor have concluded a long-term agreement for a 12,000 plus sqm hotel at the 42,000 sqm Liberty development complex, which will be dual-branded accommodation under the Ibis and Tribe names. The 3-star ibis and the 4-star Tribe brands will each operate half of the building, with 332 rooms. According to Wing, construction is underway, and the hotel is due to open in fall 2023.

Wing has also completed and sold as a turnkey project the first Hungarian B&B Hotel in Budapest to the company, having converted the former office building in Boráros tér to a 214-key hotel.

Accor group has also signed a deal for what will be the first Tribe hotel in Hungary in partnership with Futureal. The 250-room hotel in District VII is scheduled open at the end of 2023 and is designed by the Puhl and Dajka Architects Studio.

Retail development in Hungary has been very low in recent years with concerns over the level of consumer spending following the 2008 financial crisis, stringent planning regulations for shopping malls and latterly, the impact of COVID and the rise of on-line retail on demand and footfall in bricks and mortar retail. Therefore, the successful letting and opening by Futureal of the 55,000 sqm Etele Plaza, a EUR 300 mln project, is seen as a milestone in the Budapest shopping center market. Shopping center stock in Budapest stands at 822,000 sqm with the recent addition of Etele, according to Cushman & Wakefield.

“Comprehensive sustainability strategies and holistic energy efficiency and green building ratings are important for existing and new retail projects. The Etele Plaza project by Futureal is such an accredited development, but, for example, the Allee Shopping Center is also a well-known example for certified and increased sustainability,” comments Zsombor Barta, president of the HuGBC.

Futureal has extended its activities with the establishment of Futureal Investment Partners, aimed at investment and asset management in Europe. The company has purchased the 25,000 sqm Manhattan shopping center project in Gdansk, completed in 2004. Futureal looks to generate above-average returns from value-add and opportunistic situations.

Colliers estimates the Hungarian investment volume for 2021 at EUR 1.2 billion from a Central European total of EUR 10 bln-11 bln, placing Hungary in third place after Poland and the Czech Republic, the established pattern in recent years. Gábor Borbély, head of research and business development at CBRE Hungary, estimates the investment total for the year at a possible EUR 1.4 bln. CBRE put current prime office yields for Hungary at 5.25-5.5% and 6.15% for industrial with a significant gap between Hungary and the Czech Republic and Poland.

“Towards the year-end, some very interesting deals have emerged. CPI’s intention to buy Immofinanz is certainly one. It is a very large deal with a competitive portfolio. It would result in CPI becoming the most dominant player on the Budapest office market,” comments Valter Kalaus.