Kazuyuki Imazato, director-general of the European office of NEDO.

The first Budapest Hydrogen Summit was held on March 10, bringing together the bosses of leading companies in Hungary and the region, high-level government and EU decision-makers, prominent professional organizations, and renowned researchers to discuss the opportunities and challenges facing the hydrogen market in the light of 2050 climate goals.

The timeliness of the topic is undoubted. In the fight against climate change, many see hydrogen as the most promising energy source of the future and one of the primary vehicles for achieving the mid-century net-zero targets.

Pál Ságvári, vice president for international affairs at the Hungarian Energy and Public Utilities Regulatory Office (MEKH), opened the conference by saying that hydrogen would play an essential role in achieving carbon neutrality.

The National Hydrogen Strategy adopted last May focuses on “green” hydrogen (extracted using renewables power sources) in the long-term. Still, in the short- and medium-term, low-emission hydrogen (“blue” Hydrogen, produced through a process that also creates greenhouse gasses, requiring carbon capture) will be needed to rapidly reduce emissions and create a functioning market.

On the sidelines of the Budapest Hydrogen Summit, MEKH and the Hungarian Hydrogen Technology Association signed a memorandum to promote the industrial, economic, and scientific cooperation needed to create a Hungarian hydrogen economy.

Jorgo Chatzimarkakis, CEO of Hydrogen Europe, the largest European organization covering the entire hydrogen supply chain, stressed that it is time for the EU to act and accelerate the deployment of hydrogen technologies.

“This week, the European Commission came forward with a plan to target 20 million tonnes of renewable hydrogen by 2030. This means we need to quadruple the amount we agreed on last June,” said Chatzimarkakis, adding that hydrogen will soon have to become a global commodity.

Speakers at the conference discussed the main challenges and opportunities facing the hydrogen market. Thomas Schubert, a partner at Dentons, stressed that one of the obvious challenges is that green hydrogen is currently much more expensive than conventionally produced grey hydrogen (extracted through the same process as blue hydrogen but without carbon capture), and there is no real market for it today, so one needs to be created. He stressed that regulatory challenges also need to be addressed.

“What is important is that the processes that will help the move towards carbon-free hydrogen are accelerated,” he said.

Ákos Hegedüs, managing director of Linde Gas Hungary, highlighted the challenges of managing the distribution of hydrogen, noting that hydrogen should be produced locally to avoid transportation costs.

“The infrastructure is in place to transport and distribute the gas,” explained Zoltán Jászberényi, CEO of Pietro Fiorentini Hungary. “The big question is, therefore, how well this infrastructure is suited to the new challenges and how well we can make it capable of accommodating larger quantities of hydrogen.”

On the issue of blending hydrogen with gas, he stressed that the three main issues facing gas network operators are safety, availability and sustainability.

The FGSZ also supports the blending of hydrogen into natural gas and its transport utilizing the current gas network so that existing assets remain operational and valuable even when the role of natural gas is reduced. Szabolcs I. Ferencz, CEO of FGSZ, said that the gradual mixing of hydrogen with gas is possible and that FGSZ should achieve a 5% mixture rate by 2025.

Natural gas infrastructure can play an essential role in laying the foundations for the hydrogen economy of the future. A good example is the Akvamarin project, in which MFGT is installing hydrogen production and blending technology in its underground gas storage facility.

“Under the project, an electrolysis system with a total capacity of about 2.5 MW will be installed at the underground gas storage facility in Kardoskút,” said Ákos Kriston, CEO of MFGT. 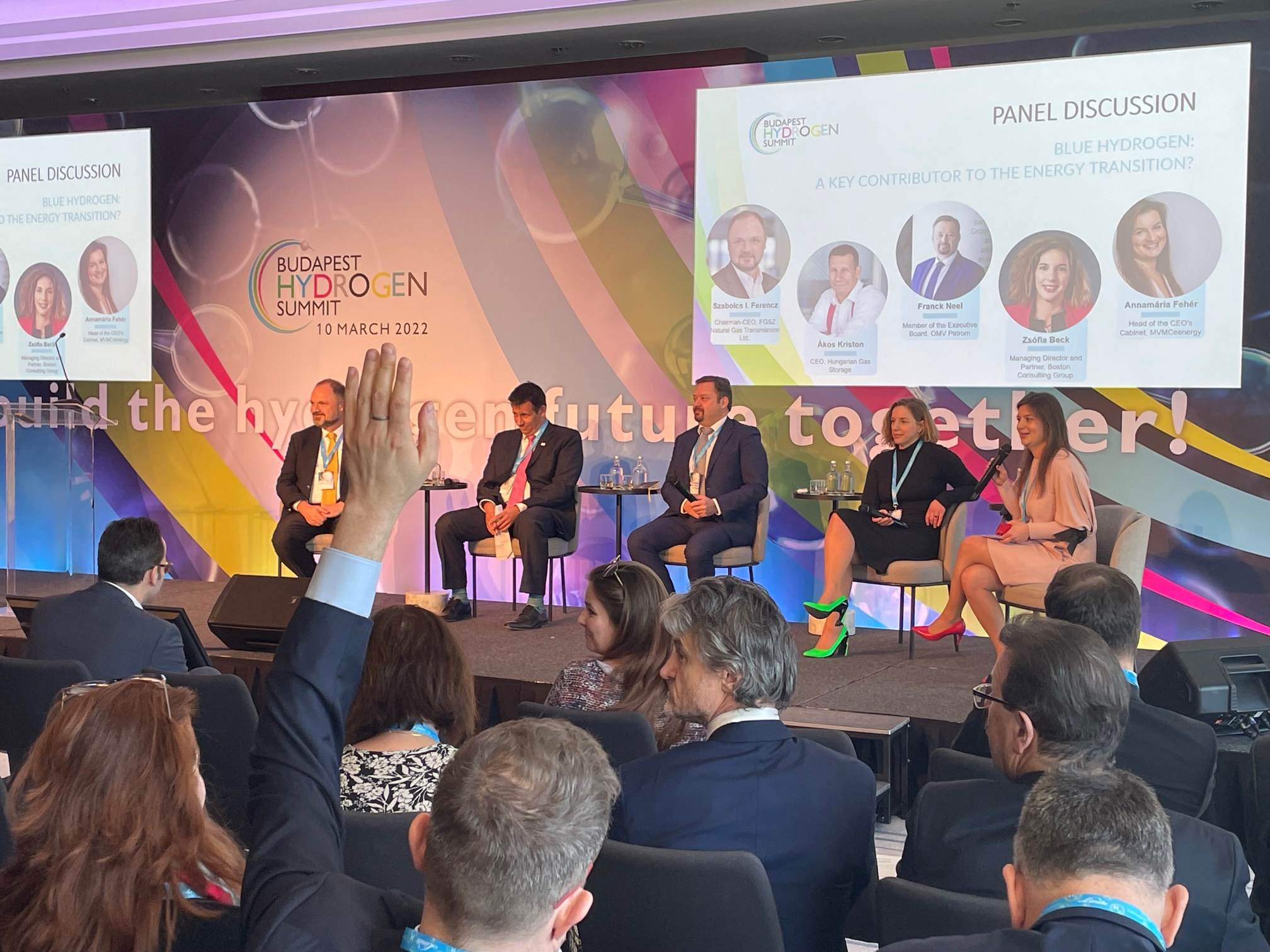 The use of hydrogen could become crucial in the most challenging sectors to decarbonize. Its versatility means that the hydrogen revolution will affect many sectors, from energy to transport, and could open up a new era, speakers said.

Richárd László, country director of Toyota Central Europe Hungary, underlined that hydrogen vehicles already exist, but the charging infrastructure is not in place.

“Building this is not just about investment, but also about regulation. The goal is clear: we need to build charging stations.”

Gáspár Balázs, CEO of Alstom, pointed out that its hydrogen trains have already been commercially proven in several countries. The technology is also a viable alternative for non-electrified lines.

“Hydrogen fuel cell passenger trains have the potential to decarbonize the rail sector in the region. In Hungary, more and more decision-makers are turning to hydrogen technology so that we will see a full deployment of hydrogen-powered passenger trains in the country within four years,” he said.

The Budapest summit brought together speakers from across the globe to present their countries’ hydrogen technology objectives and strategies.

Kazuyuki Imazato, director-general of the European office of NEDO (the New Energy and Industrial Technology Development Organization, Japan’s largest public management organization promoting R&D and deployment of industrial, energy and environmental technologies), told the conference that it had launched a “Green Innovation Fund Program,” with a EUR 15 billion budget over 10 years, a significant part of which will support hydrogen research and development.

Stefan Kaufmann, Germany’s innovation commissioner for green hydrogen, stressed that no single strategy could guarantee success; international cooperation and a global hydrogen chain are needed. He emphasized that research cooperation opens the door to developing the hydrogen economy.

“We have the opportunity to shape the market of the future, and this requires cross-sectoral cooperation, joint thinking between the investment sector and science,” he suggested.

Oleksandr Riepkin, president of the Ukrainian Hydrogen Council energy association, joined the conference online because of the war. In his speech, he stressed that although it is difficult to talk about the future under conflict conditions, Ukraine has the capacity to produce 10 GW of electrolysis capacity in line with the EU 2030 targets. He added that his country has one of the largest gas transmission systems capable of transporting pure and mixed hydrogen.

Given the success of this conference, the organizers have already indicated they plan a follow-up next year.

Hungary gets another delivery of Paks fuel by air

Gourmet Festival to open this Friday