Positive Views on Office, Despite Many Challenges

The office market faces challenges regarding financing, demand, pre-leasing requirements, tenant specification, staff requirements, and, not least, working habits for the post-pandemic era. Although most pipeline projects will go ahead, a fall in new speculative project development is expected.

The relatively small pool of Hungarian and CEE office developers operating in Budapest had already been undertaking restrained development policies for several years; therefore, oversupply is not foreseen as a problem.

Established office developers such as Atenor, Horizon Development, Skanska, and CPI are going ahead with planned office projects.

“Office developers must adjust to the market changes such as increased costs in the construction sector, a large amount of uncertainty in the office market with limited pre-leases, and different space usage requirements, but there is no need to redesign the strategy completely,” comments Valter Kalaus, managing director of Cresa.

“New office projects are being considered, however, in a very careful way; not many developers will move forward with speculative developments. Having a large anchor tenant has always been a big boost for office projects, but now it seems like it will be the key to getting started,” Kalaus says.

Csaba Zeley, managing director of ConvergenCE, argues that although pre-leases will slow down, financing on favorable terms is still available for projects with good characteristics at great locations. Hubert Abt, founder & CEO of New Work, sees a 60% pre-lease as standard for offices.

According to Cushman & Wakefield, office supply in Budapest for 2021-2022 remains constrained, with a projected pipeline of 356,000 sqm. Total modern office stock in Budapest now stands at approaching four million sqm according to the Budapest Research Forum (consisting of CBRE, Cushman & Wakefield, JLL, Colliers International, Eston International, and Robertson Hungary). The overall vacancy rate of close to 10% is expected to increase further.

New supply expectations for 2022 add up to a sizable 276,000 sqm as several projects, originally scheduled for this year, have been delayed, according to CBRE. There is currently around 450,000 sqm of space under construction, the consultancy says. 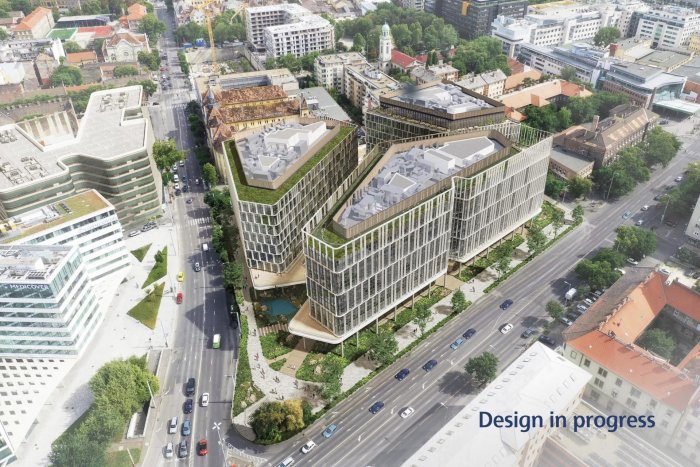 H2Offices in Budapest by Skanska.

Money issues are less of a concern for developers who fund projects from their own finances and have the option of an exit strategy at the higher end of the market. Skanska, for example, has undertaken construction of its 10th Budapest office project, the 26,000 sqm initial phase of the 67,000 sqm BREEAM and WELL “Platinum” pre-certified H2Offices in Váci út. It is due to complete by the end of 2022.

“The leasing process is longer, although there is no sign of a fall in demand for space. Negotiations can take as long as 12-18 months,” comments Aurelia Luca, executive vice president of operations for Hungary and Romania at Skanska’s commercial development business unit.

“WELL ‘Platinum’ pre-certification focuses on the wellbeing of buildings’ users. In this way, the workplace is not just a place of work and, therefore, there are more and enhanced requirements from employees. For example, the project includes green terraces and a large multifunctional garden, which is also accessible for the public,” she adds.

Sustainability accreditation from an independent, third-party organization such as the U.K.-based BREEAM and the U.S.-based LEED, and increasingly WELL, is now the norm for development.

Office interiors have been integrated into the concept, design, leasing strategy, and project and facility management aspects of office projects, given the complexity of tenant and staff demands and increasingly stringent environmental regulations, not to mention issues related to COVID.

“Tenant specifications may vary from company to company, so these will depend on the internal post-pandemic guidelines of each individual office tenant,” comments Melinda Kovács, development and leasing manager at Atenor Hungary.

“In terms of amenities, landlords will have to provide convenience services and common facilities that are inviting enough to make people want to move back from their homes into the office, where they find it easier to do their work assignments, due to the first-class, modern infrastructure,” she adds.

The Váci Corridor and South Buda continue to be the development destinations of choice, although not exclusively so. Atenor is due to deliver Aréna Business Campus B, located on Hungária körút, or the outer boulevard, in Q3 2022, in addition to RoseVille and BakerStreet I, both located in Buda, in the first quarter 2023.

There are also two further buildings at Aréna Business Campus and the second phase of BakerStreet in the pipeline.

“Spaces will shift from large work station areas in favor of collaboration spaces, activity-based and breakout areas, which is a trend that can already be seen in the case of many large occupiers, where the home office will remain part of the ‘new normal’ to various extents,” Kovács predicts.

“These spaces are designed to facilitate teamwork, brainstorming sessions, etc., while individual work may still be partly performed from home,” she adds.

With hybrid office use expected across the office market, the emphasis is being placed on communal areas, collaborative spaces, and meeting rooms. These processes are seen as having changed the look and style of offices.

“This trend is becoming even more important for the future. Also, the time has passed for over-crowded and fully packed offices places, mainly because of hygienic and pandemic issues,” comments Zsombor Barta, president of the Hungarian Green Building Council.

Leasing activity is expected to pick up further in the last quarter of the year, backed by the ongoing strong economic rebound and the general societal normalization in Hungary. The direct vacancy rate is predicted to peak around late 2022, according to CBRE.

This article was first published in the Budapest Business Journal print issue of October 22, 2021.