Júlia Sohajda, one of the co-founders of the Vespucci Partners venture capital, and Péter Perecz, the co-founding executive of Haris Digital, were the guests of the radio Hibrid Startupper, a program about startups on Spirit FM. Alongside real 21st century topics such as innovation, startups, future ideas, and potential investment opportunities, listeners also got a glimpse behind the scenes of one of America’s most significant startup events.

It is widespread knowledge that the Vespucci Partners venture capital fund aids explicitly Hungarian-American startups in growing. They are headquartered in Budapest but have an American way of looking at things. The essence of their model is that innovative developments are consistently implemented in Hungary. At the same time – because of limited possibilities in the region – some products and services will also be marketed in America in the future where the market is more competitive and has greater purchasing power. As it was apparent during the show, many people listened to Júlia Sohajda, which meant that more than the usual amount of up-and-coming business sought her out, which included some very promising candidates as well. Among such candidates was Hungarian startup Haris Digital, the company which took third place at the SelectUSA Investment Summit, one of America’s most prestigious start-up events where companies that targeted the world’s most important market are invited to present themselves.

The Hungarian startup was exceptionally successful in America

“An important step is to introduce ourselves to potential American clients, which requires an event that is attended by over a thousand startups from around the globe. The fact that Haris Digital not only made it out to the event but also achieved such amazing results in a category that is oversaturated gave them a huge boost in morale," said Júlia Sohajda, who also said that Poliloop, another company in their portfolio also performed admirably.

Péter Perecz’s account of events made it clear that the most attractive aspect of SelectUSA is that it provides up to date information and strategies to companies while also providing the necessary platform to increase their attractiveness for investment through the contact network they established at the event, which unfortunately because of the coronavirus pandemic was held online. “The innovation we represent, the preparation of the professionals at Vespucci Partners and our presentation eventually produced results," said Péter Perecz, who said it was a success that they had several conversations with the representatives of the development agencies of the United States who gave them advice regarding the American target market and the background of investment decisions.

But what was the product that received the award? 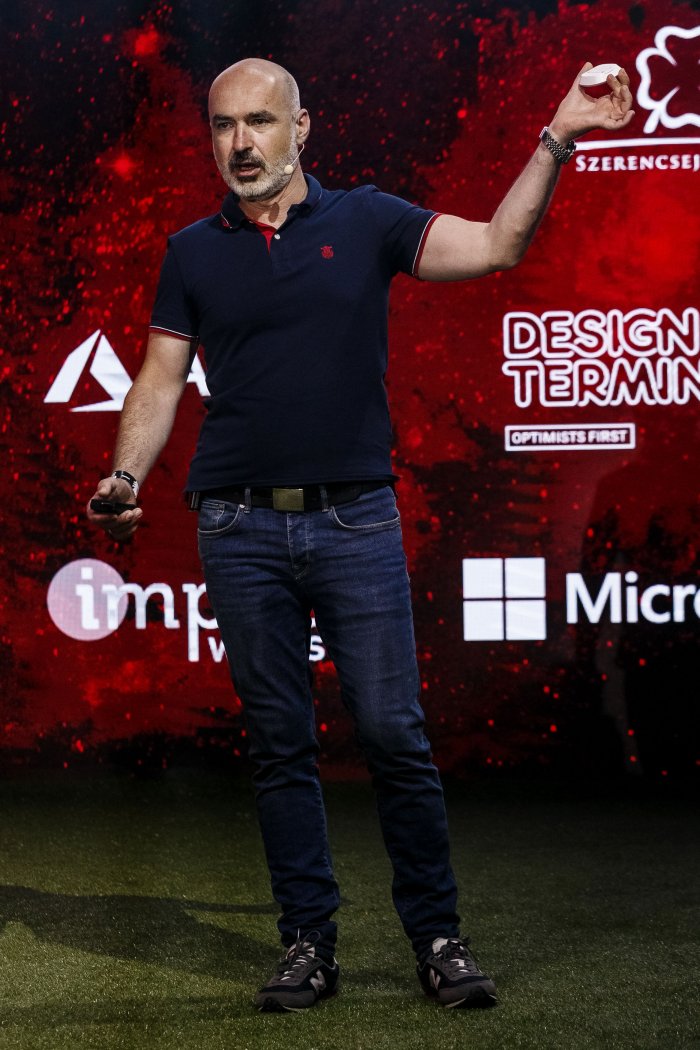 The award-winning IoT solution and what’s behind it

Haris Digital’s solution concerns production digitalization. It offers a solution that can be installed in practically 24 hours – a sensor examining the vibration and movement data from machines – which can “smarten” up any machine or equipment, which allows them to provide helpful information to the manufacturers within 15 minutes. This is done through IoT sensors and artificial intelligence-based algorithms, which transform the vibrations and movements of the machine into digitally recorded information.

“The majority of manufacturers make decisions solely based on conjecture without solid data. It’s a bit like getting up in the morning without a clock. You don’t know the exact time, but you have some idea what the time is," said the head of the startup, explaining the problem in layman’s terms.

The information received will later be transformed by the artificial intelligence algorithms of Haris Digital into information that allows professionals to increase their productivity.

Of course, the journey of Haris Digital began earlier than this. Júlia Sohajda said that they had a positive impression of the team at Haris Digital since the first meeting. The team’s level of professional knowledge, the innovative products were instrumental in Vespucci Partners finding the company worthy of investment after a thorough legal, technological, and financial screening.

“Haris Digital currently competes in the American market with pilot projects; however additional investments have begun. We have also sought out several large potential investors, and we are also in contact with venture capital funds so that we can find the most suitable solution," said the head of Vespucci Partners.

Haris Digital’s product is a global success, but we had to believe it

“The professionals at Budapest based venture capital, Vespucci Partners help a lot in us believing that we had achieved global success. Although we had big plans and knew the possibilities within the technology, we also owe them for turning all this into reality," said Péter Perecz, who also said that perhaps surprisingly, similarly to the Hungarian market, they also primarily offer larger companies production-digitalization solutions.

According to a study, while 80% of smaller companies would like to digitize, only 20% have the opportunity to do so. Furthermore, they stated that aside from concentrating on succeeding on the American market, they will also observe Hungarian small and medium-sized businesses, as through Haris Digital’s IoT solution, any participant in the market can achieve an increase in total equipment effectiveness which is sorely needed. They measure the extent, costs, and reasons for a loss in production efficiency and offer advice regarding development. In July and August, they made their product available for free for twenty companies in the Hungarian market.

In the first episode of Hibrid Startupper Júlia Sohajda discussed how the Budapest based venture capital, Vespucci Partners can help Hungarian startups to excel in the U.S. market whilst investing millions of dollars in Hungary.

What’s in a Name? Synergies, Growth and Expectations