The 33rd General Assembly and Board Elections of the American Chamber of Commerce Hungary were held in person and face-to-face on December 1, 2021, and served as yet another occasion to demonstrate the power of the AmCham community.

Like most organizations, AmCham endured a difficult time during the pandemic. However, as President Zoltán Szabó said in his report on the activities of the past 12 months, the chamber had emerged more robust than ever.

“We learned how to be more effective in what we do and how we do it. We managed to become more streamlined in terms of all three pillars of our strategy, the Policy Agenda; that is smart growth, human capital and business environment,” he said.

Members now have greater freedom to drive more bottom-up activities and cooperate for more tangible results. Work continued in committees, working groups and in the form of initiatives despite the COVID situation, the president said. The chamber’s annual policy recommendation pack, which lays the foundation for its annual advocacy work, was duly forwarded to the competent governmental bodies.

Events switched back to face-to-face mode from the early summer on, with the highlight being the seventh edition of the Business Meets Government Summit on October 8, Szabó recalled. The latter featured renowned guests such as Minister of Foreign Affairs and Trade Péter Szijjártó and the deputy governor of the National Bank of Hungary Barnabás Virág.

“What really matters is the people of our community who continued to support our cause and were always ready to go the extra mile, even during the tough times of the pandemic,” Szabó noted.

“AmCham Hungary’s finances are stable, but we are only as strong as our membership,” Secretary-Treasurer Mike Carlson reminded the audience, noting that up to 70% of total revenues come from membership fees. Therefore, membership retention is the key focus area for 2022.

The year 2020 was closed with a HUF 21.5 million profit, with total revenues of HUF 178.7 mln and total expenditures of HUF 157.2 mln. All that was achieved even though incomes from events were down by 69% compared to 2019. However, the financial outlook is positive, with Carlson planning to stick to the rigor of securing a solid foundation.

There will be a lot happening next year under the three core pillars of AmCham’s activity portfolio. The advocacy effort will see a series of new events such as conferences on healthcare and sustainability, not to mention the return of the HR Dream Day. State secretary roundtables, policy and business forums, and meetings with government participants are also in the pipeline, as chief executive officer Írisz Lippai-Nagy revealed in her presentation of the 2022 annual plan.

“We are not experts of a particular area, but we are very good at how to synthesize all your input and make sure it represents the values and interests of the AmCham community,” Lippai-Nagy said. “Feel free to suggest new topics that should be added to our Policy Agenda or that can be a trigger to set up a new committee. Our policy officers are always there for you if you have any suggestions.”

Under the knowledge pillar, members will continue to have the opportunity to sharpen their skills further and benefit from seminars, leadership masterclass series, board simulations, and career orientation programs.

AmCham community events will, of course, continue in the upcoming months. Patron dinners are underway, and there will be plenty of occasions for informal networking in after-hours events and at the annual Insight dinner. The hope is that AmCham will be able to bring back its hugely popular Independence Day family celebration and the Thanksgiving charity dinner in 2022 without any restrictions. The membership satisfaction survey is another novelty to look forward to.

“AmCham is a powerful community, and although working online is effective to share knowledge and have discussions, nothing matches being together,” Lippai-Nagy concluded. She also announced that next year would see an end to the paper copy era of the Journal magazine.

AmCham Foundation (ACF) is a bridge between donors and beneficiaries, and it’s a role model for CSR and related activities, said Edit Bencsik in her report on the latest results of the charitable organization. 2021 was big in challenges and small in opportunities and donations. Despite the limited resources, important achievements were made, from foster home refurbishment to computer donations. A total of HUF 1.5 mln was raised for three educational institutions.

As is traditional, the general assembly also served as the occasion for presenting the annual Dr. Iván Völgyes Award. Völgyes is deemed by many to have been the father of modern lobbying in Hungary. He left for the United States in 1956, and he went on to bring numerous U.S.-based companies to Hungary, generating more than USD 1 billion in investments. This year Dr. Péter Komáromi, chairman of the board of trustees at the ACF, won the award.

In the board elections LeasePlan CEO Timea Pesti won the role of First Vice President. Mike Carlson was confirmed as Secretary-Treasurer, being the only candidate. Matt Zeller and Krisztián Toka were voted Board Members-at-Large, with Dr. Andrea Jádi Németh reelected as the chairperson of the Supervisory Board. David Young remains the Supervisory Board member. 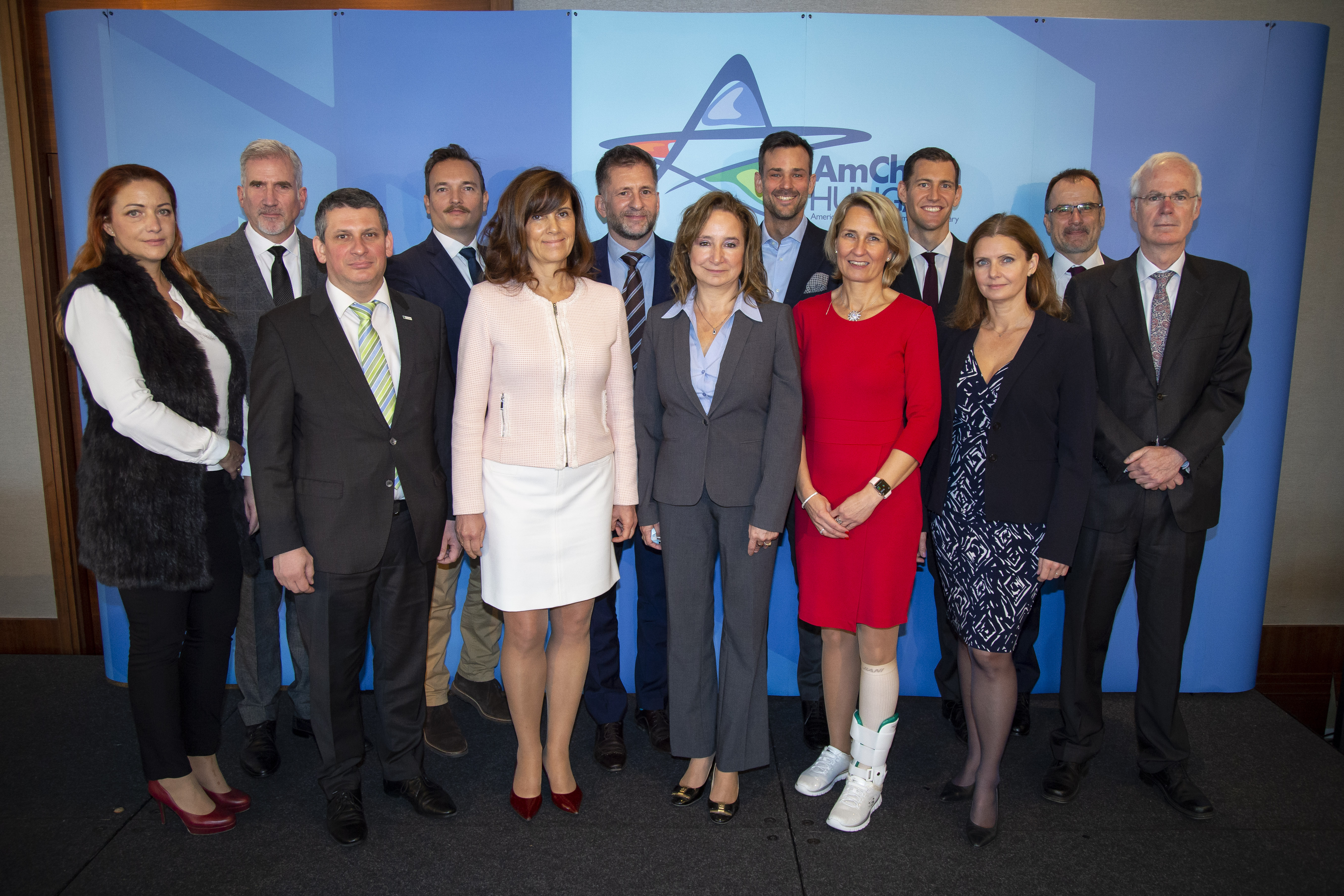 The new Board of AmCham Hungary is as follows: