The renewed interiors of Allee shopping center are characterized by modern design and nature-inspired solutions, with unique interior design ideas. Located in the heart of District XI, the renovation of the shopping complex has been rounded off with the picturesque curtain of the northern lights and the interpretation of historical Hungarian paintings. In addition to the customer experience, the focus was on modern architecture and sustainability.

The large glass façade near the two main entrances, with its glass roof, was already a striking feature of the building. The designers have made the most of these two spaces to change the atmosphere of the interior with 1-1 iconic airspace installations.

In November 2021 a giant ceiling installation of aluminum mosaics called "Staccato" was installed in the atrium facing Október 23 utca. It features a world of imagery dreamed up by graduate artists and craftsmen who have recreated three world-famous paintings by Pál Színyei Merse, creating an exciting blend of the idyll of old times and the everyday life of today.

To balance the two entrances, an element evoking the northern lights has been placed in the atrium of the Váli utca entrance of the shopping center. The unique installation brings the atmosphere of the mystical, rarely-seen northern light to the interior. Anchored to the steel structure supporting the glass roof, the atrium contains a system of rails, almost 300 linear meters long, on which a golden chain system, several kilometers long, is suspended, which, although the lights remain completely still, they create the effect of fluid movement, bringing to life the effect of the rarely seen natural northern light.

The interior and exterior modernization of Allee Center on behalf of the owners Allianz and CBRE began in 2020, and work continued throughout the Covid pandemic. Well timed for the Christmas season, the refurbishment of the shopping mall was completed with spectacular curving chain light curtains that play on the feeling of being close to nature. The goal was to create a new, modern, and fresh interior that would meet the expectations of customers and create a more intimate and warmer atmosphere with its own identity.

The unique Nordic Light indoor installation, suspended from the ceiling in curved lines, is not only impressive in its appearance, but also in its dimensions. The curtain, made up of 16,320 warp strands and weighing 9,832 kg, covers an area of 668 m2. If we join them one after the other, it would be longer than a marathon distance. In addition to its decorative role, the combination of shimmering gold chains filters the outdoor lights and reduces the dominance of the rooftop windows. During the day, the curtain also acts as a shade, while at night, the subtle, shimmering warm glow of the LED lights along the arches creates an intimate atmosphere in the interior of the shopping mall. 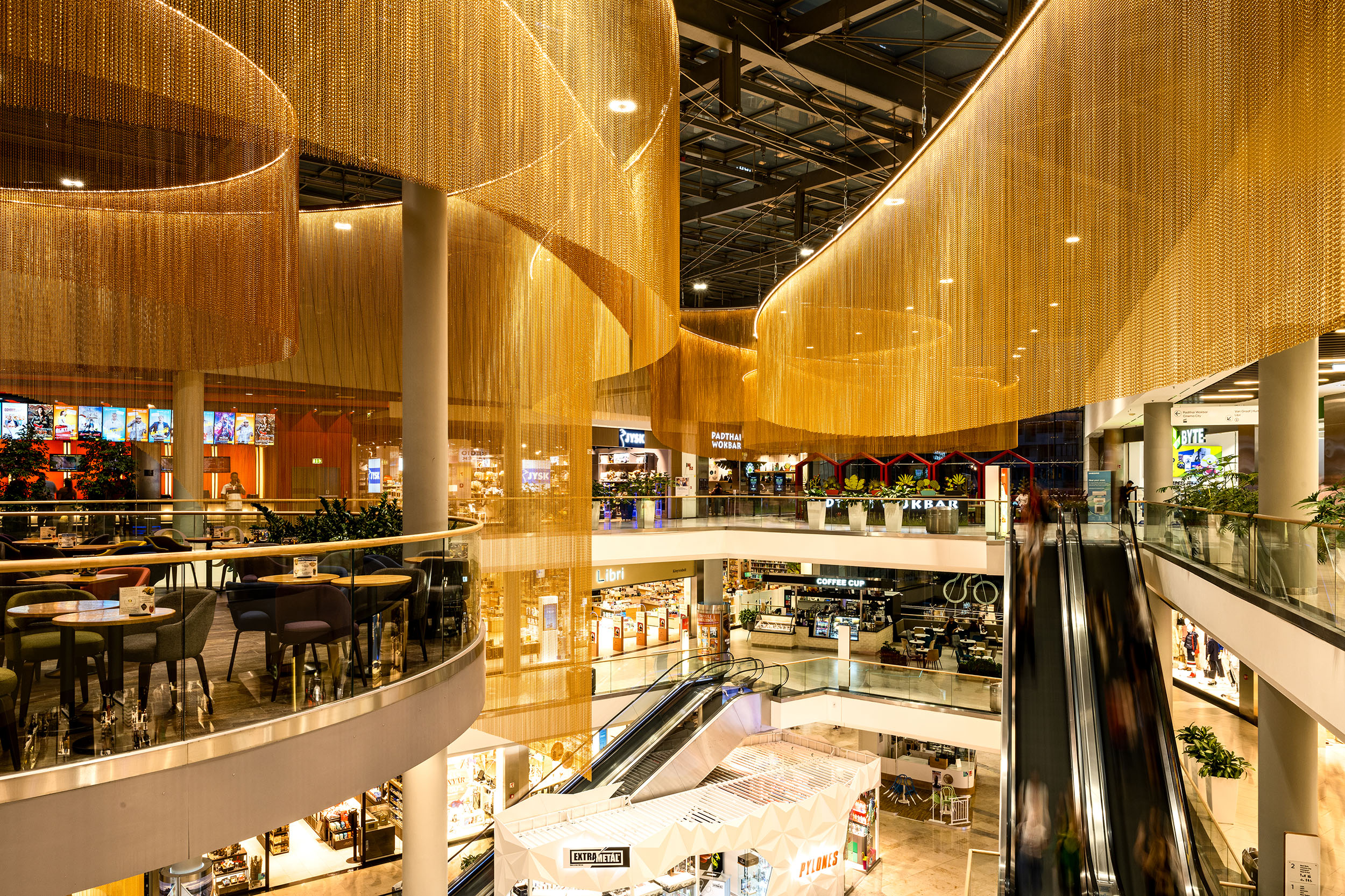 The curtains descend to the different cafés on the atrium terraces, slightly obscuring but emphasizing them, creating a dynamic yet sophisticated atmosphere. The spectacular airspace installations, especially after sunset, are clearly visible from outside and were designed and placed with the aim of not distracting visitors from the traffic and movement of the street when walking inside the building.

Allee has long been committed to incorporating modern and innovative design elements into the shopping mall. Such initiatives included the unique cinema wall of the store, which has been on display since last autumn, the glass wall of the toilet corridors patterned with birds, and the spectacular ceiling covering in the restaurant area, which is in line with the well-considered sitting concept. The overall planning, coordination, and execution of the project is the work of Multi's own architectural and design team, TTDesign.

In addition to the unique visual and customer experience, Allee shopping mall also focuses on sustainability. During the recently completed renovation, nearly half a billion forints were spent on sustainability investments alone to achieve carbon neutrality. As a result, Allee is the first shopping mall in Hungary to achieve the highest “outstanding” BREEAM certification level. At the same time, the environmental performance of the facility was also rated "excellent". Allee also proactively encourages tenants’ sustainability efforts.

Number of Job Adverts up Minimally

Slovak Retail Sales Down in October

Poles Will Spend an Average of EUR 305 on Christmas