Bródy Sándor utca next to the Hungarian National Museum in District VIII, Budapest, as seen in October 2020.

As I have said before, the best way to explore any city is to deliberately get lost, something that is admittedly getting harder to do these days when we’ve got dear old Google Maps to hand. This is as true of Budapest as it any other great city.

Around this time last year, before COVID-19 began to bite, I put my theory into practice with a marathon walk through “the eighth” (District VIII), beginning at the Hotel Astoria end of Bródy Sándor utca and ending at Keleti Railway Station.

In case you don’t know, Sándor Bródy (as we would order his name in English) was a Hungarian-Jewish writer born in 1863. He died in 1924. When his father’s various business ventures hit hard times, the family moved to Budapest from Eger, an ancient town 133 km northeast of the capital, in the center of one of Hungary’s great wine-growing regions.

Eger was ruled by the Turks for 91 years from 1596. Their legacy remains most tangibly in the form of a 17th century minaret that marks the northernmost point of the Ottoman Empire.

Perhaps I’m being overly romantic but, to me, the Turkish influence is also present in the feel of the historic streets below the castle on the higher ground of the town. I’d say it’s also there in the features and complexion of the people of Eger.

I would assume that for Bródy, Eger would have been an idyllic place to grow up, particularly if his family was comfortably off. So it must have been somewhat of a shock to be dropped into the middle of the poorer depths of Budapest.

The change in the Bródy family’s circumstances was reflected in his writing. According to the YIVO Encyclopedia of Jews in Eastern Europe website, he was “among the first in Hungarian literature to focus attention on the urban proletariat, and the first to introduce the coarse and pungent vernacular of the big city into literary works.”

His first collection of stories, “Nyomár” (Privation), published in 1884 when he was just 21 and set among a milieu of poor workers and prostitutes, caused a literary sensation. The stories were much admired by the liberal Hungarian intelligentsia of the time and highly influential.

I knew nothing about Sándor Bródy’s life and work when I walked the streets of the eighth last spring. Now that I do, I can’t help but feel that the street is most appropriately named.

From the museums and faded grand residences at the top end of Bródy Sándor utca, where it meets Múzeum krt., the street narrows and becomes rather scruffy and down at heel. At one point, it crosses an open area that I could imagine being a former bomb site. As I gradually turned east, in the direction of Keleti, it wasn’t hard to picture the neighborhood as it must have been at the turn of the 19th century, bustling but filled with lowlife. The street, it seems, mirrors the progress of its namesake writer’s life.

This April, as I contemplate another walk through Budapest, I won’t be repeating my marathon schlep through District VIII. For a start, the bars, cafés and restaurants are closed, which makes it impossible to stop and watch the district go by or use a restroom – essential on a wander of this length.

Instead, I’ll head up into the hills above the Buda side of the city. I’ve been inspired to do this by a conversation I recently had with a friend of mine who is the reason I came to Hungary in the first place. We met at Burning Man, the psychedelic festival held at Black Rock City in northwestern Nevada. He escaped from communist Hungary in 1987 but returned to the motherland as often as he could. I accepted his invitation to visit him in Hungary at New Year’s 2014 and started coming here more regularly a couple of months later.

My friend told me that, when he was a teenager, he would hike in the Buda Hills with a gang of his friends that often numbered as many as 30 people. They would spend all day in the hills, doing whatever it was that that teenagers did in the communist era.

I’d always imagined it was difficult to get up into the hills, but he assured me that it took under an hour by bus from where he lived, on the far side of Óbuda, heading towards the atmospheric town of Szentendre on the Danube. 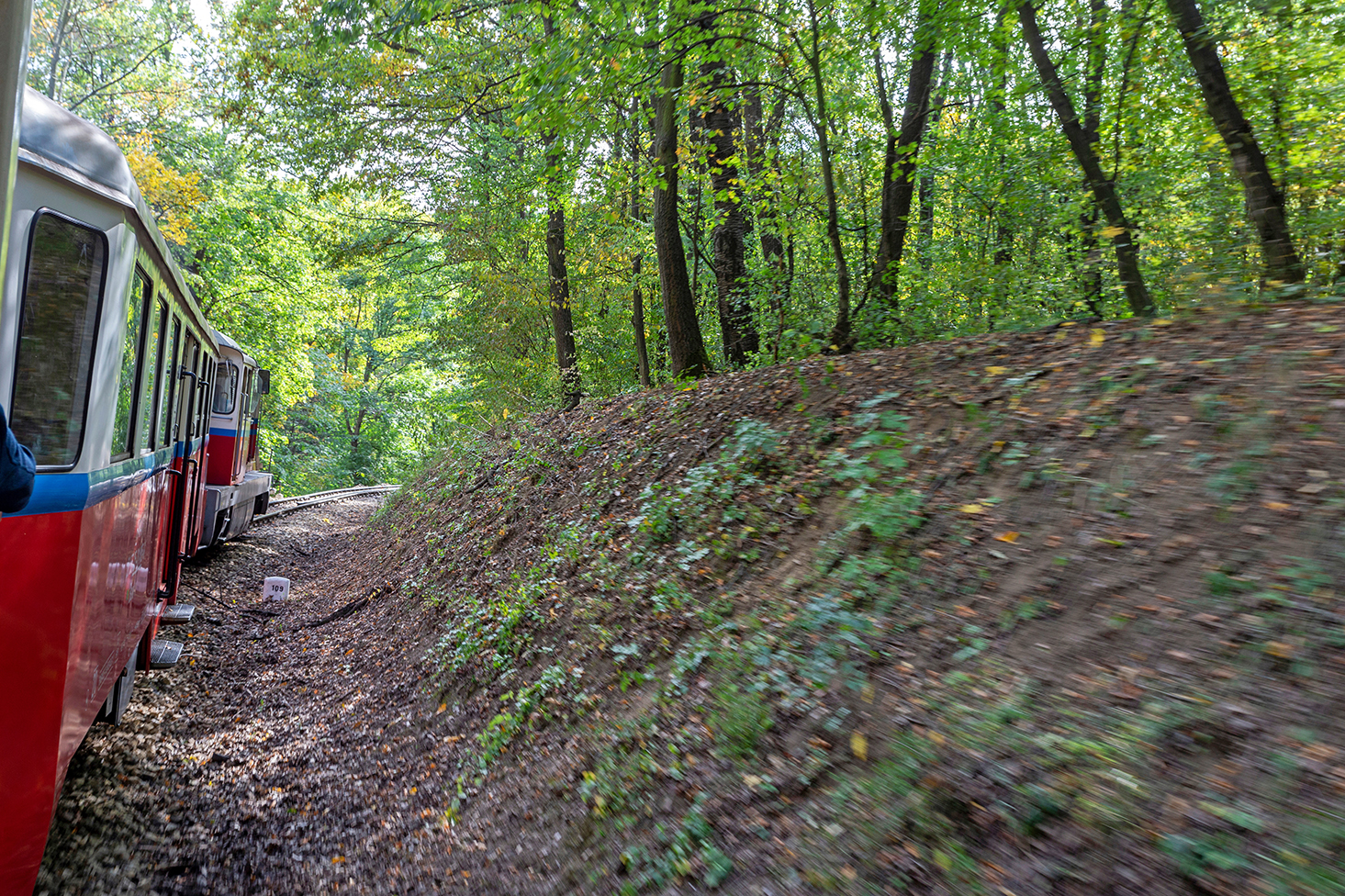 The Children’s Railway, snaking its way through the Buda Hills in September 2019. Photo by skovalsky / Shutterstock.co

According to the websites I’ve consulted, part of the fun of getting up into the Buda Hills is the variety of forms of transport you have to take.

The Lonely Planet website tells me I have to take the M2 underground from the center of Budapest to the Széll Kálmán tér metro station. I then either take the 56 or 61 tram for a couple of stops, or head west along Szilágyi Erzsébet fasor until I reach the Hotel Budapest.

(If you’re wondering, this is not the hotel that inspired Wes Anderson’s movie “Grand Hotel Budapest.” That was, apparently, a copy of the Corinthia Hotel, once called the Grand Hotel Royal, not far from Király utca in the center of the city.)

Opposite the Hotel Budapest is the lower terminus of the Cogwheel Railway, built in 1874, and which I’ve never ridden. This is now officially known as tram 60 (though it looks nothing like the city’s other trams) and it climbs for around 14 minutes up to Széchenyi-hegy.

From there, I can take the narrow gauge Children’s Railway for 11 km and eight stops to Hűvösvölgy. Or I can get off at János-hegy, the fourth stop and the highest point in the hills.

The Children’s Railway was built in 1951 by Pioneers, the socialist version of the Scouts. I wonder if they got a special railway-builders badge to sew on their sleeve.

At János-hegy, I’m told, there are plenty of walks to explore. When I’ve wandered enough, I can take the Chairlift down to Zugligeti utca and the 291 bus over Margaret Bridge to Nyugati (Western) Railway Station. Perfect.