The Hanukkiah and the Tree: Celebrating a Hungarian-Jewish Christmas

Approaching my seventh Christmas in Hungary, I became curious as to whether the country’s Jewish community celebrated along with the rest of us or whether they did anything different. I hoped a Jewish-Hungarian Christmas would be a time of arcane practices and, more importantly, food and drink into which I could, as they say, take a deep dive.

That’s because one of the reasons I like living in Hungary is the feeling that Jewish culture, something I know little about, is alive and well in Budapest.

A Jewish community has existed in the city since roughly the 12th century, with the first synagogue being built in Buda in 1307. This was destroyed later in the century when the Jews were kicked out of Buda for the first time. By the 15th century, Jews had begun to be persecuted again. Their property was seized, and loans they had made went unpaid.

After 1541, when the Turks invaded Hungary, many Jews became involved in high finance and the Buda Jewish district flourished. After the 1686 siege of Buda and subsequent Hapsburg victory, the Jews were expelled from Buda again. This led to District VII, over in the then neighboring town of Pest, becoming Jewish. It was as close as Jews were allowed to be to the river.

In the 19th century, Jews gained more freedom. By 1873, the Jewish population of Budapest was around 200,000, and the new city made by combining Buda, Pest and Óbuda was home to 125 synagogues. Jewish affluence led to District VII booming from the late 19th century until the Holocaust.

Today, Budapest’s Jewish community is much reduced. But, at around 110,000 people, it’s the most important in Europe.

I knew none of this history when, one bitterly cold December morning a few years back, I first wandered into the Frőlich Kosher Cukrászda on Dob utca and discovered flódni, the Hungarian Jewish confection made with layers of poppy, walnut, apple, and plum jam separated by layers of sweet pastry.

Although it’s eaten all year round in Budapest now, flódni was traditionally only eaten in the fall and winter, especially during the Hannukah festival.

Flódni dates back to that 13th-century Jewish community in Buda. Originally made using goose fat, its ingredients are typically Hungarian but used in a particularly inventive combination. After talking with Viktor Singer, manager of the wonderful Fülemüle restaurant at Kőfaragó utca, not far from the old heart of the Seventh (as locals often call the district), I realized that flódni kind of symbolizes what it means to be Jewish in Hungary today. It was created by Jews using Hungarian ingredients and is now part of the culture of the entire country.

Although non-practicing, Singer celebrates Hanukkah, the eight-day Jewish “festival of lights” that falls during Advent in the build-up to the Christian feast of Christmas.

Hanukkah, or Chanukah, means “dedication” and celebrates the reclamation of the Holy Temple in Jerusalem from the Syrian-Greeks who ruled the Holy Land in the second century BCE.

When the Jews wanted to light the Temple’s menorah, the iconic Jewish seven-branched candelabrum, they found only a tiny bit of olive oil that hadn’t yet been ritually blessed and could be used. They lit the menorah candles with this, and they miraculously burned for eight days. Hanukkah recalls this miracle.

The special Hanukkah menorah, the hanukkiah, is central to the celebration. Its branches hold nine candles, one of which is used to light one of the other candles every night until all are lit.

Because the miracle is all about oil, fried food such as latkes (potato pancakes) are traditionally eaten during the festival. In Hungary, many of the same dishes are eaten during Hanukkah and over Christmas.

“We eat halászlé, the Hungarian fish soup during these celebrations,” Singer tells me. “We also eat cholent, the traditional Jewish stew. We’ll have a leg of goose. Those of us with a sweet tooth will eat beigli or flódni.”

Beigli is the long pastry roll filled with walnut or poppy seeds served at Easter and Christmas. It’s delicious but, unlike flódni, heavy on the pastry. This means if you have more than a couple of slices, it can feel like you’ve eaten a piece of furniture

We debate which establishment in Budapest makes the best flódni. I suggest Fröhlich on Dob utca, but Singer argues in favor of Ráchel’s. Ráchel Raj, christened “Budapest’s Flódni Queen” and a TV personality as well as a baker and cake designer, is new to me.

I can’t imagine any flódni being better than Fröhlich’s, but I’m sure Raj’s is at the very least different.

Interviewed for the EasyJet Traveler website in 2020, she says, “My mum and grandma would make it only for special family gatherings,” she says. “Every family has their own version of the recipe. I put a personal spin on all my other cakes, but I would never mess with my grandma’s flódni.”

In the same interview, Raj gets to the heart of what it means to be a Hungarian-Jew or a Jewish-Hungarian today when she says, “The question of whether I feel more Hungarian or Jewish doesn’t make sense to me. [….] The younger generation is super-interested in Jewish food; they aren’t thinking of those divides.”

Viktor Singer puts it even more succinctly when he says, “You couldn’t separate the culture of the Jewish community nowadays from the Hungarian because we live together in cooperation and influence each other. We proudly celebrate Hanukkah because we are Jews. We celebrate Christmas because it’s part of our life in Hungary. In our house, we have a hanukkiah and a Christmas tree.”

Fröhlich is at 22 Dob utca and Ráchel at 13 Wesselényi utca. Thanks to Budapest.com for the potted history of the Jews in Budapest. 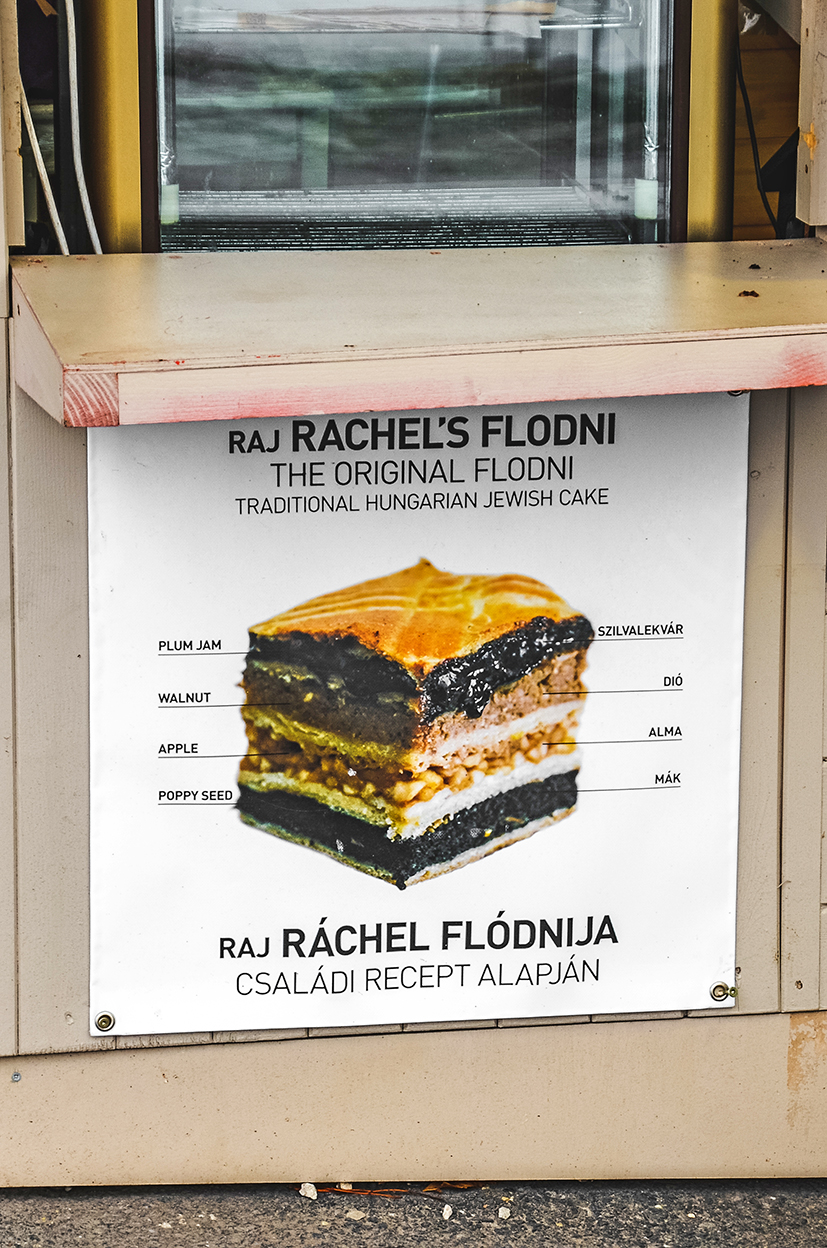 Advertisement on a Christmas market stand from 2019 for Ráchel Raj’s family recipe flódni.

6th Debrecziner Gourmet Festival in the heart of the Great F...