Hungarians drink 2 cups of coffee per day on avg - survey

Hungarians prefer to drink coffee in the comfort of their own home, but they also like having a cup at work, and they choose cafés based on atmosphere and coffee quality according to the results of a survey of around 2,500 people conducted by Coca-Cola HBC Hungary, the exclusive distributor of Costa Coffee and Caffè Vergnano; and GKID.

According to the survey conducted in March 2022, 29% of regular coffee drinkers consume one cup of coffee a day, and around 60% drink two or three cups per day.

Coffee is avoided by half of the 18-24 age group, while barely 19% of those aged 60 and over drink no coffee. The 40-49 age group consumes the most coffee, with one in two respondents drinking 2-3 cups a day and 14% consuming more than three cups each day. Overall, the research shows that Hungarian coffee drinkers consume an average of two cups a day.

"It is also my experience, and we see it from the research, that the most important coffee of the day is the first cup in the morning because of the morning wake-up caffeine boost. Two-thirds of respondents think so, but it can also be seen that there is a gradual shift from functional coffee to quality consumption: the morning coffee became an enjoyable experience, a part of the me-time, not just a caffeine shot," says Iván Gávris, coffee expert of the Coca-Cola HBC Hungary.

"Young people are more refreshed in the morning and are clearly not fans of drinking coffee alone: 18–24-year-olds are less likely to drink coffee in the morning, they prefer to have a good cup of coffee with friends during the day, which is also a social experience," he adds.

According to the survey, people who drink coffee are almost certain (93%) to consume it at home, but it is also popular to drink coffee at work (54%) or when visiting somebody (33%).

It is not surprising that cafés are very popular among the youngest age group, the 18–24-year-olds, with 31% of them regularly drinking coffee at these places as it is a meeting point with friends, while only 11% of all respondents drink coffee in cafés.

Ground coffee still holds its place on the top, with about half of respondents buying coffee in this form. Whole bean coffee and capsule coffee are also popular, with one in three respondents choosing them.

Most people have capsule coffee machines at home (35%), but one in three respondents use a moka pot, and almost as many use a traditional espresso maker. 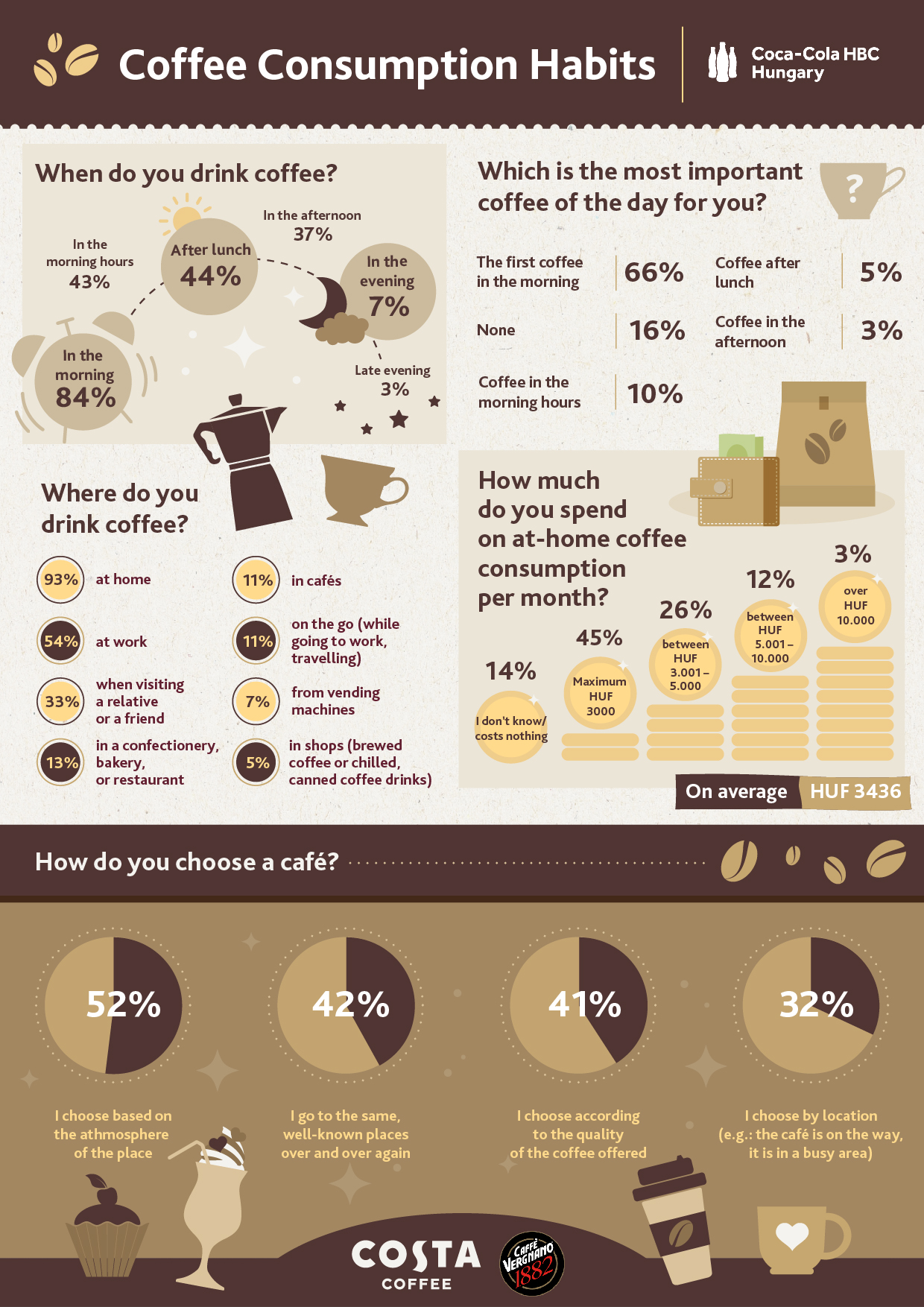 Every second respondent chooses a café based on the atmosphere of the place, while for 40% it is important to know the place, the offer, and the staff. About a similar proportion considers the quality of the coffee selection a key aspect. One-third of respondents choose a café based on its location.

Aspects vary significantly between different age groups: only 6% of respondents consider it important to have WiFi in the café of their choice, but for 43% of young people, this aspect is decisive. More than half of the respondents go to a café to meet friends and socialize, this is especially true in the 18-24 age group: 71% of them visit a café because of the company. 25–29-year-olds also like to drink coffee in catering establishments, with 74% saying they simply like being around people.

Half of the respondents spend less than HUF 3,000 per month in cafés, but relatively many, one-fifth of domestic coffee drinkers spend between HUF 3,000-5,000 per month.

As many people have returned to workplaces from home office, drinking coffee on the go has become important again: men spend an average of HUF 2,500 a month and women an average of HUF 2,000 each month on it. Drinking coffee on the go is the most popular in Budapest and other big cities, while in smaller towns and villages, coffee drinkers spend much less, the survey reveals.