A Return to Kékfrankos and Kadarka Tasting

The local wine tasting scene appears to be returning to something resembling normality, with a couple of bumper tastings coming up, as out columnist Robert Smyth explains.

The Budapest calendar ground to a halt last year after the Winelovers’ Bordói November Grand tasting on Nov. 20, except for some smaller sipping sessions.

The classic season opener, the Furmint February Grand Tasting, is not going ahead in the capital this year, with the chief organizer, Dániel Kezdi, running a smaller event at his Kálvária Pince in Budakalász the day this issue is published (Feb. 11).

However, some 220 exhibiting winemakers will be pouring more than 1,000 wines at this year’s Borjour Magnum, which will be held at the Budapest Congress Center on Feb.19.

Whetting the palate for that was Borjour’s Kékfrankos and Kadarka event, held at Manna Lounge on Jan. 29. This bijou tasting featured Hungary’s two leading red wines made from indigenous grape varieties, bringing together a dozen producers from various Hungarian wine regions.

Szekszárd continues to be the Hungarian epicenter of the Kadarka grape (essentially the same variety as Bulgaria’s Gamza). It came to Hungary from the Balkans, supposedly brought by Rascians from present-day Serbia, fleeing Ottoman invaders. Szekszárd is also a key producer of Kékfrankos, Hungary’s most widely planted grape.

The two grapes also team up to provide the base for Bikavér in Szekszárd (and increasingly in the other Bikavér region of Eger). The fragrant Kadarka contributes a few percent to the Kékfrankos core, with fuller-bodied international varieties then fleshing out the blend.

The concept of clones is helpful in understanding Kadarka, as the given clone has a strong bearing on the kind of wine made. Szekszárd winemaker Csaba Vesztergombi, whose wines were served at the Manna Lounge tasting, believes the secret is to not rely on one clone in channeling the best of the grape into the glass.

“The point with Kadarka is to work with different clones; the end result is better,” he asserts. Vesztergombi’s Kadarka 2019 comes from a mix of old vines more than 100 years old, as well as the widespread P9 clone and another clone from Balla Géza’s vineyards in the Ménesi wine region, near the city of Arad, in present-day Romania.

Vesztergombi admits he is not a huge fan of P9, which yields fragrantly spicy but featherlight wine. He had wanted to graft different clones in its place last year but did not have the time.

“Kadarka needs substance, it needs to be red wine,” he explains. Mission accomplished in this rich take on the grape. Incidentally, Vesztergombi also believes that Kadarka cannot be the main grape of the wine region, especially as it is very sensitive and highly susceptible to extreme vintage variation.

While Vesztergombi may not be a fan, the P9 clone can make wine that, at its best, is ethereal and exciting while also exuding fruitiness and spiciness. One such wine is Lajvér’s Kadarka 2020, which I reviewed in November.

It has a stunningly vibrant pale ruby color, with anise, rosehip and strawberry aromas and flavors, and a delightful lightness of touch on the light-bodied palate that is nevertheless long and lingering.

This wine was made in Flexcubes, the increasingly popular contemporary aging vessel. In this instance, some oak staves were inserted into the polymer cubes to add just a hint of woody character. The wine is outstanding value at HUF 2,390 from Bortársaság.

Close to Szekszárd, the region of Tolna continues to fly under the radar. An exciting small producer from that region, who was also present at Borjour’s Kékfrankos and Kadarka tasting, is Grál Borpince, where owner Zalán Mucsi makes the wines.

He made two soon-to-be-released Kadarkas from the 2020 vintage, aging different clones in different vessels. The Kadarka from the P9 and P13 clones was aged in amphora.

“The Kadarka clones like amphora, and the fruitiness and terroir come out very well,” says Mucsi. The result is a complex wine that is vibrant with zesty acidity and a delicate structure yet also deep, with a mélange of aromas and flavors from raspberry and rosehip, to anise, medicinal herbs and earthiness. This wine will cost HUF 4,300 from grálborpince.hu upon release.

Meanwhile, the sturdier, more intense and robust wine from the P147 and P163 clones, which will be labeled as “Classic,” was matured in oak. Both wines were fermented in open vats. 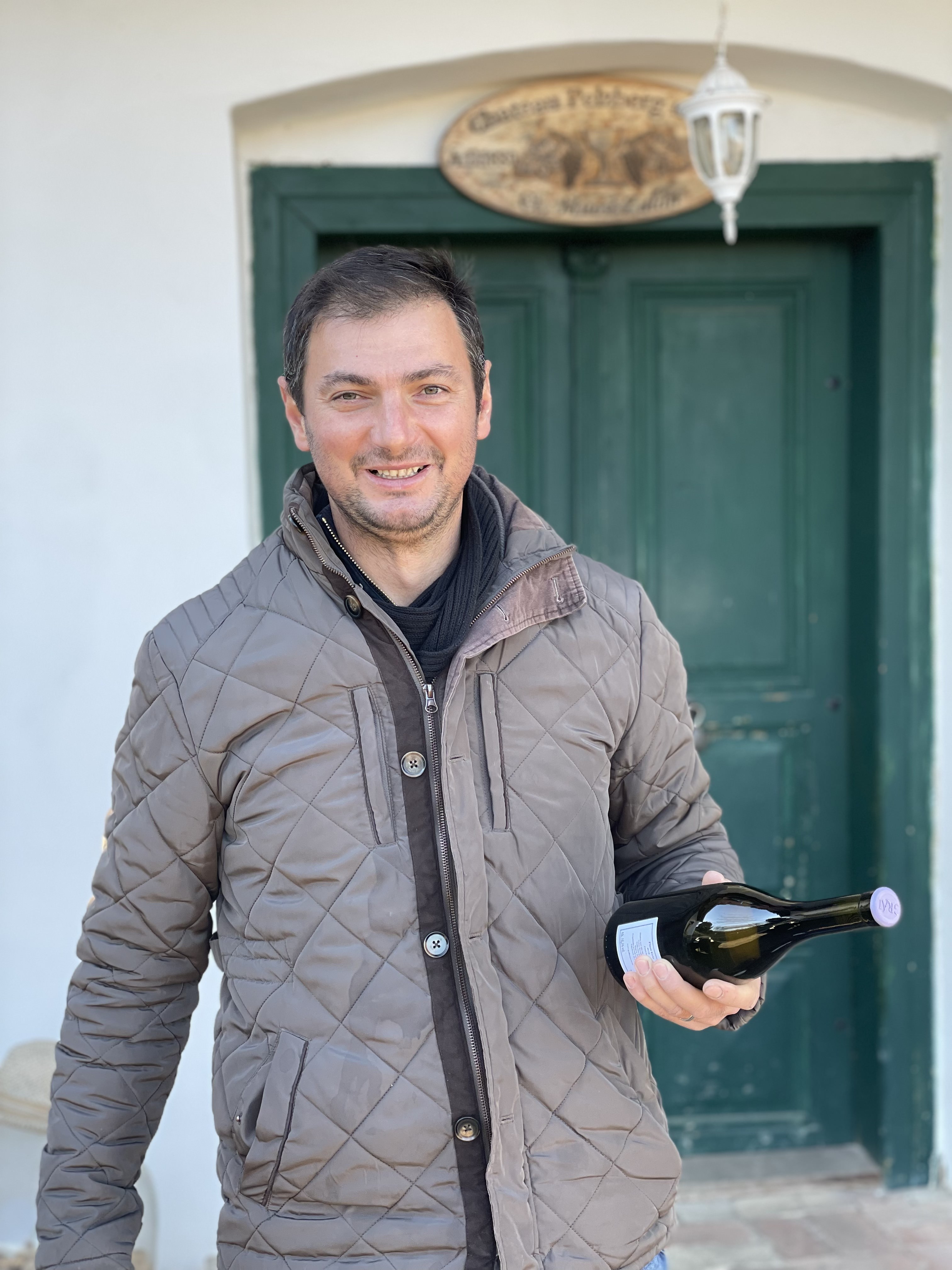 Grál, which cultivates 2.7 hectares organically in the village of Gyönk (147 km southwest of Budapest by road), is renowned for its Kékfrankos from the steep Pelzberg vineyard, which is located just above the winery and reflects the Swabian German origins of the area.

“I’m in love with the color and taste of Kékfrankos,” says Mucsi.

Grál, a name which refers to the Holy Grail, burst onto the Hungarian wine scene when its 2012 Pelzberg Kékfrankos won Borászportál’s Hungary’s Best Kékfrankos medal in 2015.

Pelzberg Kékfrankos 2018 comes from an Austrian Blaufränkisch clone from the vineyards of Burgenland grower/winemaker Ernst Triebaumer, located in the village of Rust, and the Austrian Kt1 clone. The resulting wine, which comes from a tiny yield of 0.7 kg of grapes per vine, spent 22 months in new and used French and Hungarian oak barrels, was neither filtered nor fined and is sensational.

It has an inviting purple color, with lively, complex aromas of violet, potpourri and red berries. It has a juicy, herby palate that’s restrained but delicious and costs HUF 5,400 from grálborpince.hu.

Grál’s Pelzberg Reserve Kékfrankos 2017 spent a whopping 24 months in French oak and is selected from a prime 0.1-hectare micro parcel of the Pelzberg vineyard and Austrian A1 clones. It has a similar character to the previous wine but more complexity with fabulous fine-grained tannins. It costs HUF 10,000 from the cellar.

From Mátra, Itt és Most Pince’s Tibor Hofmann was another to get a very good result from aging his spontaneously fermented Ideje Van Kékfrankos 2018 in used French oak barrels for 13 months. This vintage is a bargain, however, at HUF 3,300 from ittesmostpince.wineshop.hu.

His neighbor in Gyöngyöspata (82 km northeast of the capital), Hoop Wines, also makes concentrated Kékfrankos as well as a Pét-Nat from the same grape. Wine blogger turned winemaker Zoltán Németi is now making his own wine at Hoop and his first Kékfrankos from the 2019 vintage, which was also aged in French oak, shows great promise.

Most of the above-mentioned vintners will also show their wares at Borjour Magnum. After that, attention will turn to the Winelovers’ Grand tasting on March 19, with 160-plus exhibitors, at the Corinthia Hotel Budapest.

This article was first published in the Budapest Business Journal print issue of Feb. 11, 2022.