Henri Matisse: The Color of Ideas, Masterpieces from the Centre Pompidou, Paris runs until Oct. 16, 2022 at the marvelous Museum of Fine Arts in Budapest. The Matisse exhibition, the first major show of his art in Hungary, continues the remarkable run of first-rate exhibitions that has made last year and this two of the museum’s most successful ever.

It’s this, combined with vigorous, rough brushstrokes, that make Matisse’s early work so exciting. In contrast with the Impressionists, his work and that of the other Fauves is, well, wild.

More significantly, it is, as the Guggenheim Bilbao describes it, “an outrageous departure from traditional art.” This rupture led some of the Fauves to Cubism, even more removed from “realistic” art.

Matisse and his fellow Fauves interest in African and Oceanic art, made by the people of the Pacific Islands and Australia, also influenced the development of Western avant-garde art.

This seeming departure from what had gone before, the use of simplification and abstraction and the emphasis on the artist’s own vision, was, in fact, rooted in Impressionism but with none of the prettiness. You would never say Matisse’s work is relaxing to look at.

From 1906 onwards, he combined intense color with decorative patterns and flattened forms in a style that grew progressively simpler. For me, this is where it’s possible to see a connection between Matisse and Hockney who also uses intense color and dramatically simplifies the human form in a painting such as the splendid “Afternoon Swimming.”

When Matisse moved to Nice on the French Riviera in 1917, his work became less intense. During the 1920s, he was embraced by the establishment for supposedly upholding the classical tradition. From 1930 onwards, he simplified the forms in his painting even more. When he could no longer paint, he took to cutting paper collage. 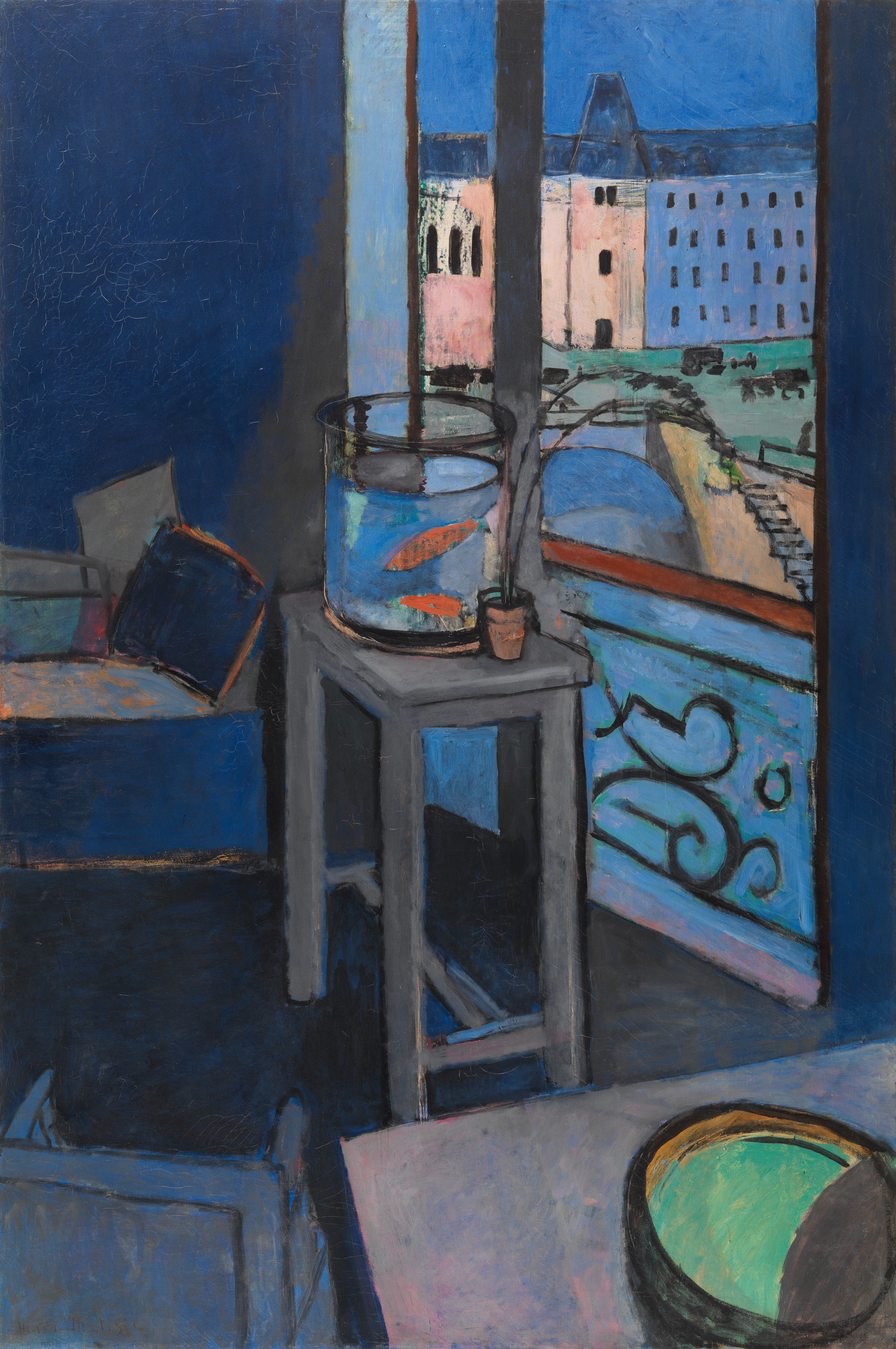 All of this is represented at the exhibition at the Museum of Fine Arts, which goes deeply and comprehensively into demonstrating Matisse’s development over the 64 years in which he painted.

It includes more than 150 works, arranged into eight chronological-thematic sections. These range from his earliest compositions to pieces from the 1950s and explore issues central to his oeuvre, such as the relationship between line and color and connections between interiors and figures.

Later in life, Matisse was aware that he didn’t paint like other artists. He described himself as, in the beginning, feeling “like someone who arrived in a country where he cannot speak the language.”

But, as the “Early years, 1895–1909” section of the exhibition shows, after visits to the painters Paul Signac and André Derain in 1904 and 1905 in the sun-drenched south of France, he committed himself to color.

From 1910-17, the period covered by the “Fractures and Windows” section of the exhibition, Matisse’s work became more radical and avant-garde. His conviction that this was the way for him was reinforced by visits to the studios of artists including Picasso and Juan Gris, who made Cubist work for a time.

I hadn’t been aware that Matisse was also an important sculptor. But, as “Sculptures, 1909-1930” shows, his “The Back” series “demonstrates a brand-new concept of monumentality and stylization of form,” according to the Museum.

“Figures and Interiors, 1918-1929” covers the period Matisse spent in Nice and focuses on his interiors. One can’t help but wonder whether, in this post-World War I period of chaos and economic turmoil, Matisse was consciously retreating from the outside world. This perhaps also explains why, in this period, he was regarded as upholding the tradition of French classical painting.

His 1921 “Odalisque with Red Culottes” (Odalisque à la culotte rouge, 1921) is classical in subject but his treatment is thoroughly modern.

Matisse traveled to the United States and Tahiti in 1930 and, as the “Modernist Experiments, 1930-1946” section shows, the inspiration he drew from his travels transformed his work. It became simpler and more complex at the same time.

“From Nice to Vence, 1938-1946” covers what Matisse called a second “flourishing” of his art. (Vence is a small town on the French Riviera.) The “Vence Interiors,” in particular, show how he explored the relationships between color and line and color and space.

“Chapel of the Rosary, Vence, 1948-1951” and “Paper Cut-outs and Late Works, 1937-1954” were, for me, the two most interesting sections. I had no idea Matisse had decorated the Dominican Chapel of the Rosary in Vence or that he developed a method of collage involving gouache paper cut-outs.

The cut-out “Pale Blue Window” is so charming that its modernism can be missed if one is not careful.

By the time one has wandered through “Henri Matisse: The Color of Ideas,” it’s not difficult to agree with his statement that he managed to give painting “a new start.” As he went on to say, “Is it pretentious? Maybe, but why not?” It’s also possible to grasp the consistency of Matisse’s work.

The title of the exhibition comes from a phrase the French poet Louis Aragon attributed to the painter and it’s highly appropriate. Matisse was always wrestling with questions of space and plane, interior and figures as well as color and line. He also constantly returned to and reinvented these questions in his paintings of objects and the relationship between interiors and windows as boundaries seperating inner and outer space.

Find out more about Henri Matisse: The Color of Ideas at www.szepmuveszeti.hu.

Over 30 Brands to Show at Budapest Central European Fashion ...

Debrecen Int'l to Close for a Week for Runway Repairs