In Search of Groundbreaking Results

The new HQ of the Hungarian Center of Excellence for Molecular Medicine in Szeged.

Statistics indicate that the aging of the overall Hungarian population is irreversible, at least for the next 10-15 years. The question is: can the health of that population be improved? A research organization based in Szeged will soon start working on the answer and is actively recruiting the best medical experts available.

The organization in question is the Hungarian Center of Excellence for Molecular Medicine (HCEMM); its main R&D focus is the development of molecular approaches for diagnostics as well as treatment leading to healthy aging. Christoph Sensen, the director general of HCEMM, shared how the project began and where it is heading now with the Budapest Business Journal.

BBJ: How did this all start?

Christoph Sensen: HCEMM started as one of the European Teaming grants in 2017. The current partners are the Semmelweis University, the University of Szeged, and the Biological Research Center in Szeged. The advanced partner of the HCEMM project is the European Molecular Biology Laboratory (EMBL), with its headquarters in Heidelberg, Germany. The National Research, Innovation and Development Office (NKFIH), which initially coordinated HCEMM, now functions as an observer. HCEMM has also received National Laboratory status in Hungary and a thematic excellence award.

BBJ: What is the primary purpose of this funding?

CS: The main topic is the healthy aging of Hungarians. If you look at the statistics, the life span of Hungarians is about six to seven years below the European average. It has a lot to do with lifestyle; for example, the level of alcohol consumption, smoking, and obesity. We have major disease complexes: cancers, metabolic diseases, cardiovascular diseases, and lately also infectious diseases. Most non-infectious chronic disorders are compounded by infectious diseases at the end of life. So, many people who initially have cancer eventually die of sepsis, for example. These are the major disease complexes that we work on, which contribute to shortening the life span of Hungarians or lowering their quality of life. To counter this, we use molecular techniques to make new approaches for diagnostics or disease treatment. Such technologies used here are DNA sequencing, proteomics [the study of a large number of proteins in biological systems], and several other omics technologies [genomics, metabolomics, metagenomics, transcriptomics, etc.] developed over the last 30-40 years. Through our research, we also aim to lower the costs of the Hungarian healthcare system. We work on finding new approaches either to detect diseases earlier or to treat them. To do this, we started to build new research groups with the grants that we earned. All of the groups already established are listed on our website. 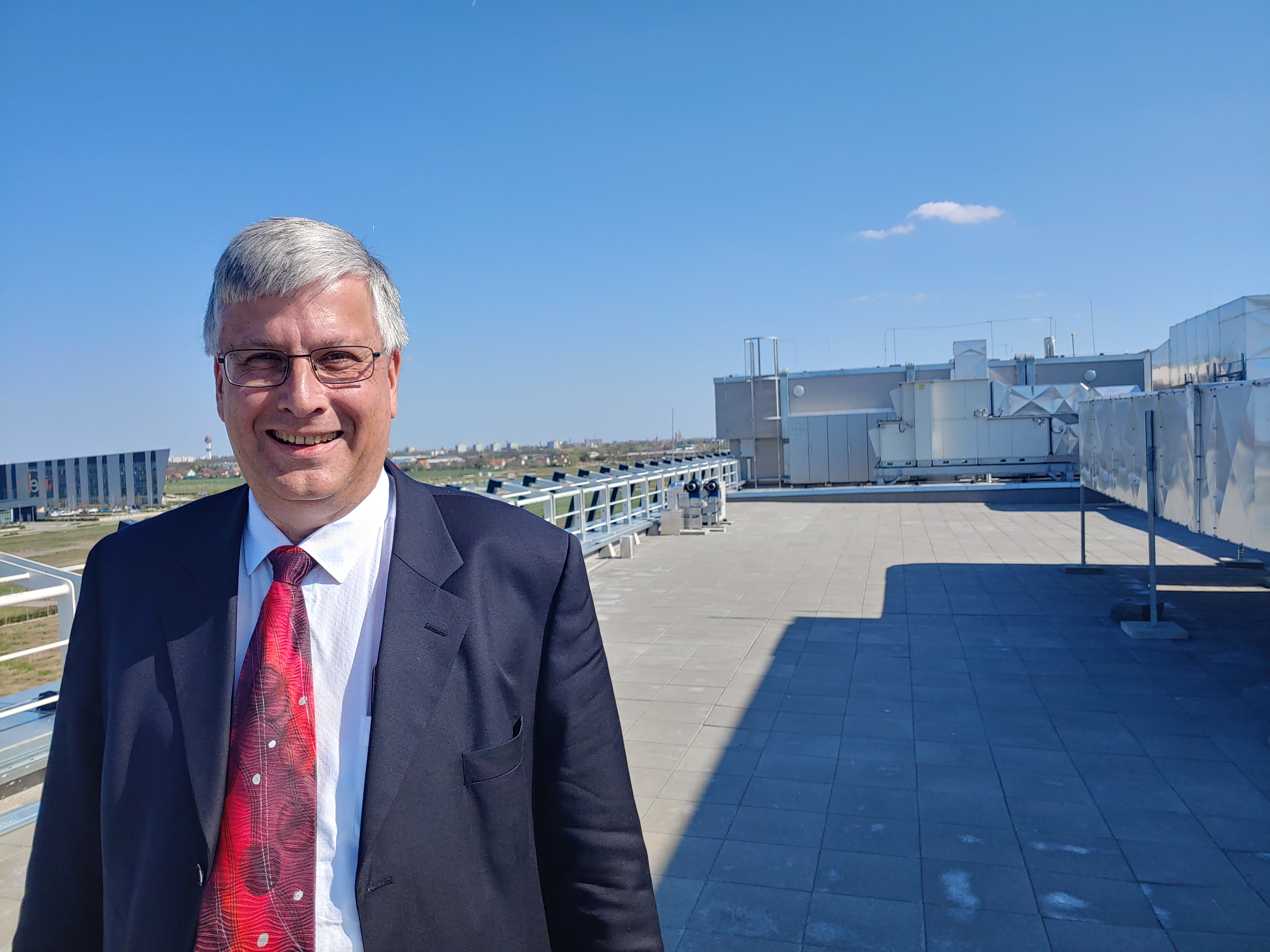 Christoph Sensen, the director general of HCEMM, on the roof of its new HQ.

BBJ: What is the concept behind the new approaches?

CS: If we could find markers that tell early on whether or not a treatment is successful, you could change the treatment to another strategy that is better for the patient. And it will also be cheaper because a shorter treatment will cost less. This is the diagnostic part. We are also looking for markers that allow us to tell early on if a disease is starting to develop. Brain tumors are typically discovered when they are already the size of a walnut, which is too late; therefore, the death rate is extremely high. Why do we find them so late? Because in the brain, there are no nerves for pain. If we had markers for these cancers circulating in the bloodstream, for example, we could check them once a year, as we do now for other diseases, like prostate cancer. So, if we could detect these earlier, the treatment success rate would be higher, the quality of life for the patients would increase, and the costs of the treatment would also be much lower. These are the strategies that we are now trying to develop.

BBJ: What kind of professionals are you looking for?

CS: This is now the second call, and we are looking to establish six or seven new research groups at our new headquarters in Szeged. These are independent of the HCEMM owners, so they are directly paid through grants that come from the Hungarian government as matching funding for the initial teaming grant. The jobs offered are quite attractive, as they allow the establishment of new research groups at a new site, where the groups design their work environment entirely from scratch. This is quite a rare opportunity, which may come only once in the life of a scientist!

We are also establishing a so-called advanced core facility for scientific computing at the headquarters, which will benefit all of the HCEMM groups. This is currently an underdeveloped research area in Hungary, so we plan to make, with European and national funds, a contribution not just to 20-25 groups of HCEMM but to the rest of Hungary as well.

BBJ: What is the roadmap that you are seeking to follow?

CS: To give you an example, we are trying to establish new technologies in the next three-to-four years in the diagnostics field. In Hungary, sepsis has a mortality rate of 38%. Over 4,000 people die in hospitals from sepsis every year here. If we detect it two days earlier and we can interfere two days earlier with antibiotics, when the bacterial or fungal load in the blood is still low, the patient’s chance of survival is much better. If we can develop this into a routine diagnostic test, it will be a significant benefit to patients as well as healthcare providers.

COVID and sepsis are interlinked because the COVID virus lowers the immune system, and people eventually often die from a secondary bacterial infection, which ultimately causes sepsis. In our study, we will also look for markers for the severity of the COVID infection, and hopefully, this information can be used over time to guide the treatment of patients with information gained when they first present at a doctor. In summary, we are looking for long-term solutions that the healthcare system can use on a large scale for the benefit of many.

This article was first published in the Budapest Business Journal print issue of May 6, 2022.