What kind of year did national markets close in terms of competition, how did GVH see 2021?

The Budapest Business Journal talks with Csaba Balázs Rigó, the President of the Hungarian Competition Authority (GVH) about reforms in the organization, consumer protection, actions against cartels, and the effects of the pandemic on the markets.

BBJ: Our last discussion was at the same time last year. Back then, you were appointed as the president of the competition authority in the middle of the year after which you already reported on ambitious organizational changes. Now, a year later, the image is surely clearer: have the reforms proved successful?

Csaba Balázs Rigó: Yes, they met the expectations and they work. We took huge steps forward in the fields of organizational integrity and economic rationalization. The changes are mostly reflected in professional work: we operate as a more responsive and customer-focused national authority than before, which treats as a priority the action against harmful market practices affecting Hungarian enterprises, the most efficient treatment of the problems of domestic consumers, and the direct compensation of the effects of competition law infringements. The GVH's competition supervision proceedings have thus become more suitable for compensating consumers for the damage they suffered. In addition, the GVH won the title of “Family-Friendly Workplace” due to the reforms introduced. 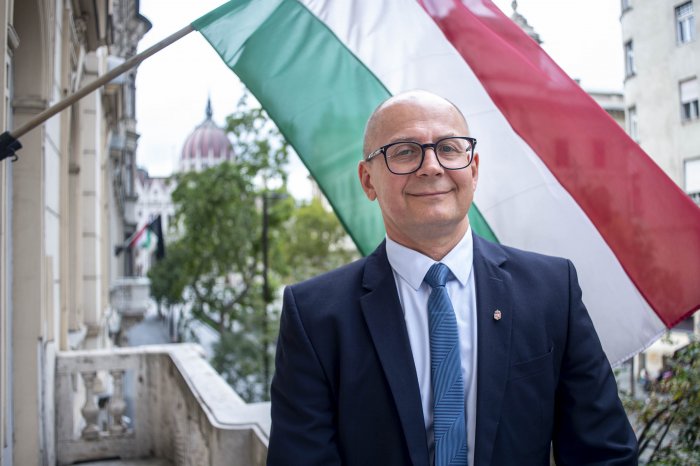 BBJ: How is it to be understood that procedures have become more suitable for providing consumer compensation for the damage they suffered? Will the fines paid be reimbursed to consumers?

CsBR: No, unfortunately we do not have the opportunity to do so, as the central budget is entitled to all fines imposed. In the course of the proceedings, as well as through the messages that the decisions of the Competition Council intend to convey for the market players, we can encourage the mitigation of the damage caused by the infringements and the undertakings may receive significant fine reductions if they seek adequate reparation. There are two advantages to cooperating with a competition authority in proceedings: on the one hand, it is worthwhile for the undertakings; on the other hand, it has a non-negligible effect on the enforceability of the public interest. Last year and in the first half of this year, the total value of consumer compensation programs set out during the proceedings of the GVH exceeded HUF 4.1 billion, which is a larger amount than ever before. In addition, the Competition Council imposed significant fines.

BBJ: Does this mean that this phenomenon could displace the fines imposed?

CsBR: Where possible, the Competition Council of the GVH, based on the authorization given by law, reduces the fine for the direct benefit of consumers. However, the practice of imposing fines as such cannot be displaced; it continues to be an essential deterrent in the competition supervision repertoire. For instance, the GVH always acts with the utmost rigor against the most egregious anti-competitive practices, such as cartels and it is not possible to end violations of this gravity with a voluntary commitment. The fine imposed this year has so far been HUF 17.3 billion, the overwhelming part of that, i.e. 94%, which is HUF 16.3 billion, was imposed for cartel conduct.

BBJ: Earlier, the GVH was often criticized for only dealing with consumer protection cases and barely taking action against cartels. Can we say that this trend has been reversed this year?

CsBR: The above data tell a lot. We could say that the trend has been reversed but to tell the truth, those criticisms were based on misunderstandings or misleading information. In fact, the fine rates vary cyclically: consumer protection proceedings are completed faster; thus, their decision-making is more continuous and frequent, while cartel cases are more intense, sometimes affecting many market participants or many tenders, and it can take several years for a decision to be adopted. Therefore when the GVH was accused of the lack of cartel detection, we were working in the background on several cartel cases, which have just been concluded this year.

Naturally, such proceedings are currently in progress, similarly without lot of attention, in the investigation or competition council phases. The cartel cases concluded this year have eliminated the harmful effects of restrictive market practices in several areas: the competition council imposed the largest fine in the history of the GVH due to a cartel affecting the entire domestic fertilizer market, the effects of which could have spilled over to the widest possible range of Hungarian farmers and consumers over the course of several years. Therefore, this year showed that we are constantly and vigorously working to combat cartels since their elimination is always a benefit for the Hungarian people.

BBJ: The economic effects of the epidemic were discussed last year, and unfortunately the subject is still relevant. How did the past year go in this regard?

CsBR: Like everyone else, the pandemic gives us extra work in at least two areas. On the one hand, the GVH took action against undertakings that were conducting misleading commercial practices directly related to the pandemic, e.g., advertising face masks, sanitizers, dietary supplements and cosmetics promising protection against the coronavirus in ways that infringe the law. Due to such practices, the Competition Council has so far had to impose fines of more than HUF 300 million; however, fortunately, these violations have receded somewhat since vaccines providing real protection against the epidemic have been available. On the other hand, we must deal with the market effects of the pandemic in certain areas, such as the construction industry.

The raw materials for construction have become unusually expensive in recent times, which is essentially a global market phenomenon. One of the main issues is caused by the increase in the price of the materials needed for production - steel, wood, plastic. Considering that due to the epidemic, many factories shut down or operated at a slower pace. After the epidemic subsided, the postponed demand for a year and a half-flooded the previously more restrained production, which resulted in sudden tension on the global market. The domestic construction industry is strongly dependent on imports: among the Visegrad countries, Hungary is the most exposed; last year, 48% of all construction industry raw materials were sourced from abroad.

BBJ: If the price increase is primarily caused by global market conditions, how can the GVH take action against it?

CsBR: Not all building material prices have risen due to the increasing international raw material prices. On the one hand, in addition to the exposure mentioned earlier, oligopolistic markets have also emerged in Hungary in the case of specific raw materials, where producers are only present in small numbers and have high market power and can easily set their prices higher than those of a competitive market. The GVH initiated competition supervision proceeding against the three most important players in the domestic cement market on suspicion of abuse of dominance as early as last autumn. In July of this year, an investigation was launched against one of the most important gravel extraction companies in Central Hungary, also due to an alleged abuse of dominance. On the other hand, in some cases, market distortions that can often only be revealed through the full and comprehensive investigation of the often multi-player supply chains.

Fortunately, this was recognised by the competent legislative body as well; therefore, the Government temporarily extended the powers of the GVH with a new instrument, the possibility of an accelerated sector inquiry. Thanks to its expanded powers, the competition authority is able to reveal the detailed causes of market distortions in a more targeted manner with the help of procedural rules that demand faster mandatory responses from the undertakings in question, thus allowing the GVH to take the necessary steps to eliminate them. We have already used the new opportunity for two different building materials: the accelerated inquiry conducted on the brick market has already been completed and based on its results, we proposed, among other things, the application of state incentives to support the expansion of domestic production. We also pointed out the significance of pro-competitive procurement associations, which strengthen the bargaining power of small domestic construction traders and may also lead to a reduction in the final consumer price. The results of the inquiry were otherwise made available for public consultation, to which we received positive comments. The market for wood building materials is currently undergoing a sector inquiry, the results of which I will report on later.

BBJ: In addition to competition supervision, the GVH is active on the international stage as well: last time, we discussed that Hungary would host this years’ annual conference of competition authorities worldwide. How did the event go?

CsBR: We are present at every international professional event where we are able to improve the reputation of Hungary. We had the opportunity to host the conference of the International Competition Network (ICN), which brings together the competition authorities from around the world, between 13 and 15 October this year and it can be said that the event was a success in all respects. Last year, it was organized by our U.S. counterparts online, next year Germany will be the host. This spring, I agreed with the ICN’s governing body to hold the conference online in light of the pandemic situation. This turned out to be a good decision in the end, and not just because it was much more cost-efficient—we only use less than one-eighth of the budget allocated to the event. But it was also more advantageous because competition practitioners, competition authorities, lawyers, judges and academics from all over the world were able to participate in plenary and breakout sessions in a much larger number of people in the virtual space than in previous conferences.

We experienced great interest: 1,768 competition law experts from 97 countries registered for the event, while the previous in-person conferences were attended by 550-600 people. During the three-day conference, with the help of more than a hundred speakers , the staff of the competition authorities, legal experts, and representatives of Hungarian and foreign press could get an insight into the latest development in competition law and law enforcement trends in the international arena. I also presented a pioneering international survey of the GVH examining the interactions between environmental sustainability and competition law at the conference. With respect to the organization of the event, I can report that in addition to the cost savings, we were able to further build the reputation of the Hungarian competition law community and the recognition of Hungary in an innovative way. I would like to use this opportunity to thank the Hungarian government for providing the necessary financial resources needed for the organization of the event.

Serving the Future With Applied Research