Macron came to Budapest for a summit of the leaders of the Visegrád Group: Hungary, the Czech Republic, Poland, and Slovakia.

Before his meeting with the Hungarian PM, Macron paid his respects at the grave of Ágnes Heller at the Kozma Street Jewish cemetery, where the French President was received by András Heisler, President of the Mazsihisz and Péter Kardos, Chief Rabbi. The politician met the family of the world-famous Hungarian philosopher and paid his respects to the victims of the Holocaust in Hungary at the Holocaust Memorial, according to a report by news site Index.

According to state news agency MTI, the Hungarian PM and the French president held a press conference early Monday afternoon, where Orbán said that Hungary's relationship towards Macron "is that of respect."

Orbán said that he believes they can agree on three things, that they both love their countries, that they are both working for a stronger Europe, and that Europe needs strategic autonomy.

Strategic autonomy entails Europe having its own defense industry, having its own nuclear energy capacity, and being self-sufficient in agriculture, Orbán said before their bilateral talks.

Macron said that although there are known disagreements between Hungary and France on a political level, France is a loyal and pro-European partner.

The French president said he wishes to strengthen European energy sovereignty by reducing gas imports and moving towards nuclear energy. In migration policy they are looking for ways of convergence as events in the past weeks are calling for rethinking common organizing principles to strengthen the protection of outside borders and to find ways of joint European action, he noted.

According to a report by 444.hu, Macron headed to the French Embassy in Budapest in the afternoon to hold talks with four key opposition figures: opposition candidate for PM Péter Márki-Zay, Mayor of Budapest Gergely Karácsony, president of opposition party Momentum Anna Donáth, and MEP Klára Dobrev, who represents the Democratic Coalition party. 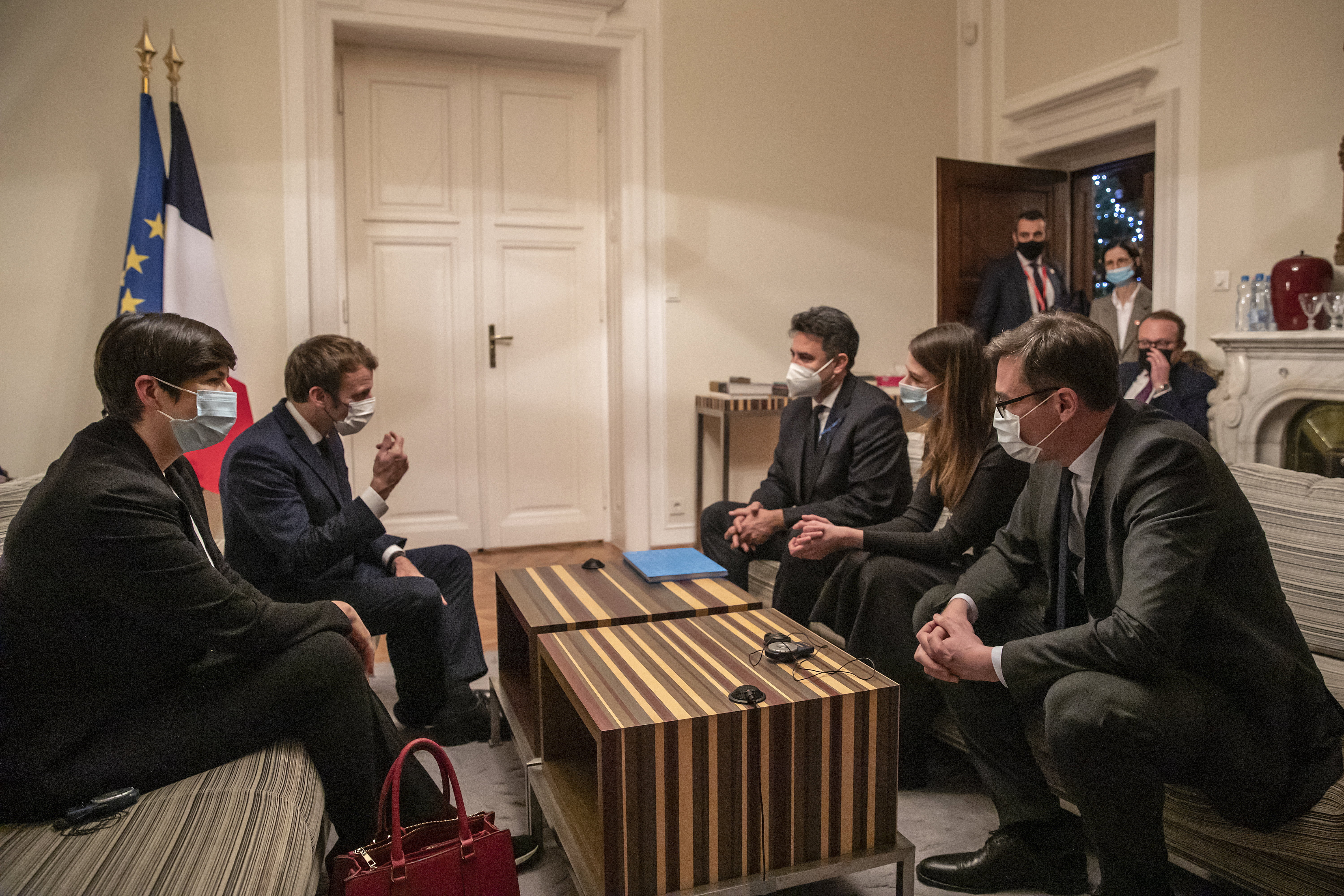 The opposition politicians held a press conference after the meeting. Márki-Zay noted that the meeting lasted about an hour and was held in a very positive atmosphere. He said that the relatively long meeting also shows that the French president is interested in the values that define the opposition in Hungary, such as the rule of law and the fight against corruption.

According to the report, Dobrev said that Macron made a "firm promise that the rule of law mechanism will be put in place during the French Presidency." France will hold the Presidency of the Council of the EU between January 1-June 30, 2022.

Donáth spoke of a forward-looking meeting, which confirmed that the rule of law is no longer a bargaining chip for the French leadership, because it is no longer a legal but a political issue to take European values seriously, and to ensure accountability.

Karácsony claimed that in the Hungarian government's policy corruption goes hand in hand with the representation of Chinese and Russian interests, while President Macron stands up for the vision of a strong and united Europe, because he knows exactly what it is like when Russia wants to interfere in a country's elections.

The summit between the leaders of the V4 countries and France was held late Monday.

At a joint press conference after the meeting, Orbán said Macron presented the plans and goals of France when it takes over the rotating Presidency of the Council of the European Union at the start of next year.

According to MTI, he thanked Macron on behalf of all of the V4 countries for his "openness and foresight" in sharing the key aims of the French Presidency of the Council of the EU.

Orbán said the sides also had "thorough and exhaustive" talks on migration and a "thorough, exhaustive and passionate" discussion on the issue of rule of law.

Other topics discussed included the Western Balkans, energy, with a focus on nuclear energy, and the future of the EU's emissions trading system, he added.

Macron acknowledged that the issue of the rule of law is a "sensitive topic", but also a "vital matter" for Europe, "be it about rule of law or about the fight against discrimination".

He said there was a "rich exchange of views" on the topic, adding that a solution needs to be found that can advance the matter beyond the current "stalemate".

Commenting on the French Presidency of the Council of the EU, Macron said "deep reforms" of the EU's Schengen passport-free zone are required. He added that people who have no right to be in the territory of the EU must be deported.

Fielding a question on the government's planned buyback of Liszt Ferenc International operator Budapest Airport, Orbán said it is "unreasonable" to conclude a deal before the elections in light of high inflation and uncertainty on international financial markets.

"So we'll wait for the elections, and then decide afterward," he said.

Speaking about a delay in the European Commission's approval of Hungary's Recovery and Resilience Facility (RRF) plan, Orbán claimed that the country is "the victim of political blackmail". He added that the EC's request for Hungary to modify its legislation on family rights and education is "completely unacceptable".

Orbán also repeated a call for the EU to cover "at least half" of the cost to Hungary of defending the territory's frontier.