U.S. Largest Investor in Hungary in 2020

HIPA has a strong working relationship with the American Chamber of Commerce. From left: Írisz Lippai-Nagy, CEO of AmCham; Róbert Ésik, CEO of HIPA; and Zoltán Szabó, president of AmCham.

Over the past few decades, Hungary has become a significant investment location for U.S. companies. The Hungarian Investment Promotion Agency tells the Budapest Business Journal that a stable political and economic environment, high-quality infrastructure, favorable taxation system, motivated and highly-skilled work force, plus diverse language and technological capabilities are just some of the features that make Hungary particularly appealing when it comes to choosing a location to settle.

The U.S. plays a significant role in the Hungarian trade and investment field. American companies are present in economic sectors ranging from general and advanced manufacturing segments to business services as well as a great variety of high value-added areas like electronics and medical technology, HIPA says.

The U.S. has risen to become the second-largest investor in Hungary, with around 1,500 companies employing almost 100,000 people. Between 2016 and 2020, HIPA supported 65 new investment projects from the United States, leading to the creation of more than 10,000 new jobs for Hungarians with a total investment volume of over EUR 1 billion.

In 2018, U.S. foreign direct investment stock reached almost USD 9.9 bln, amounting to around 10.7% of total FDI stock in Hungary, according to a publication by the National Bank of Hungary (MNB) issued on March 23, 2021, citing data from 2018.

As far as the number of newly created jobs is concerned, America was actually the largest investor in Hungary in 2020; 15 U.S. companies made positive investment decisions with a total of 2,496 planned new workplaces.

Bilateral commercial trade reached almost U.S. 5.9 bln in 2020, which was a 0.1% increase compared to the previous year. According to the Hungarian Central Statistical Office data, the United States was the 2nd most important trade partner of Hungary outside the European Union in 2020. 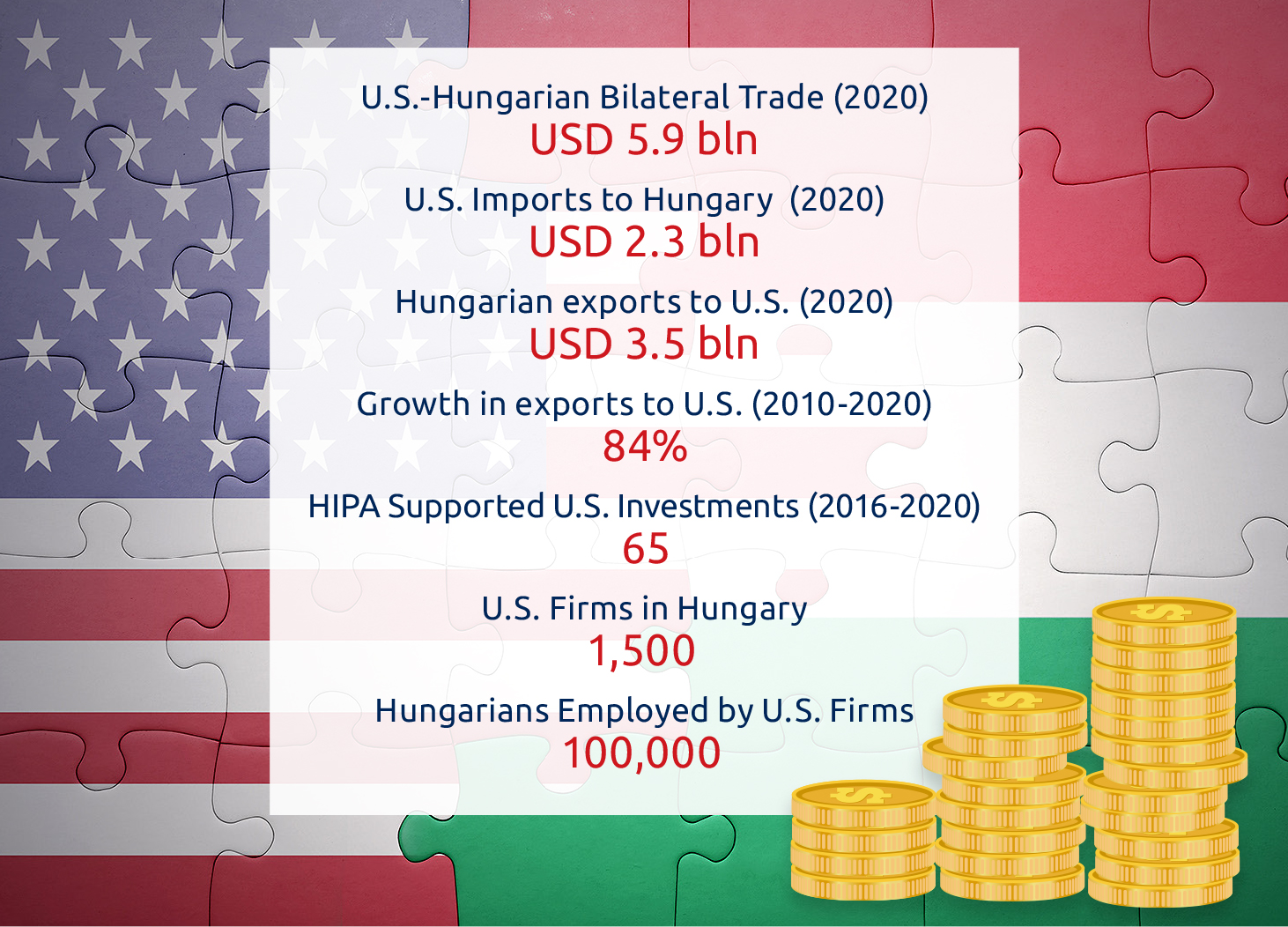 Imports to Hungary were over USD 2.3 bln, putting the U.S. in 14th place on the list of source countries. The U.S. is also the second-largest consumer of Hungarian exports outside the EU, with over USD 3.5 bln in exports. Between 2010 and 2020, Hungarian exports grew by more than 84%, making America the 11th most important export market for Hungary.

Electronics, automotive and engine parts manufacturing, life sciences, agriculture, and logistics are some of the industries where American operations play a crucial role.

Companies within the business services and ICT sectors have traditionally demonstrated a strong presence in Budapest, with BlackRock, Citi, Diligent, IBM, Microsoft, and Morgan Stanley among the examples, HIPA says.

An increasing number of U.S. companies are deciding to reinvest or expand their operations in Hungary. In addition, there is a growing emphasis on talent management, educational collaborations, and innovative solutions.

In the business services sector, centers of excellence have been emerging in recent years, where ever more complex activities are carried out, including functions like R&D, engineering, product design, or software development. Some of the latest high value-added investments were announced by Diligent, Ford, S2G, Thermo Fisher Scientific, and ExxonMobil.

HIPA says it offers a wide variety of incentives to facilitate foreign direct investments and reinvestments by enterprises. The main types of incentives are cash subsidies or tax deductions.

Over the years, HIPA has been providing one-stop-shop management consultancy services to U.S. businesses willing to establish or expand their operations in Hungary.

HIPA has also been active in policy advocacy and has a long-standing partnership with the U.S. business community and the American Chamber of Commerce in Hungary. In addition, AmCham has a significant role in supporting member companies and facilitating constructive dialogue with the Hungarian Government and HIPA.

The past 18 months have shown that crisis resilience, supply chain security, and active government support of businesses play an increasingly important role in the future of global investment decisions.

U.S.-Hungarian economic relations are strong and continuously growing as a result of accomplishments and mutual trust. Hungary remains determined to maintain efforts in order to ensure a favorable and competitive business environment and is committed to supporting the continued successful operation and further growth of U.S. companies in Hungary, HIPA insists.

This article was first published in the Budapest Business Journal print issue of July 2, 2021.

Gov't to support organic farming with HUF 40 bln of funding

Gov't to support organic farming with HUF 40 bln of funding

Foreigners made 7.7 mln trips to Hungary in Q2