PwC Looks Back and Ahead at CEO Survey Anniversary

Hungary’s CEOs show record levels of optimism for the immediate future, but there are still some familiar concerns, a few of which have deepened, consultancy PwC Hungary said at the presentation of its 10th annual Hungarian CEO survey.

With a decade of data sampling now behind the survey, the 2021 results threw up a number of notable facts. For a start, going all the way back to that first survey, optimism about the rate of global and Hungarian economic growth has never been higher. Half of the respondents expect to increase headcount this year.

Next, this was the first time the results of the survey was presented in an entirely online format. The 2020 results had been aired in the hallowed surroundings of the Hungarian National Gallery, up in the Castle District, just weeks before Hungary went into its first lockdown. Partner Barbara Kuncz, who acted as the principal host for this year’s two-hour event, said the 2021 survey had featured “a record number of participants, and all discussions went online.”

She also recalled the press conference for the 2020 survey, when there had been markedly more pessimism among Hungarian CEOs, leading to a suggestion crisis planning would need to take on greater significance.

“I was asked ‘What crisis should we be ready for?’,” she recalled. “I said ‘Any crisis!’” She was not claiming to be particularly prescient; the 2020 survey had been undertaken in November 2019 when “no one knew about coronavirus.” But there was “something in the air,” with rising concerns about the possibility of a global crisis and the dangers presented by climate change.

And for all the optimism about an economic COVID bounce back once restrictions are lifted, those worries linger, with PwC saying the pandemic has deepened concerns business leaders already had. The percentage of CEOs worried about a higher tax burden has increased to 50% (up from 21% last year), but crisis preparedness, deteriorating workforce health and the spread of misinformation also rank much higher on CEOs’ list of concerns. 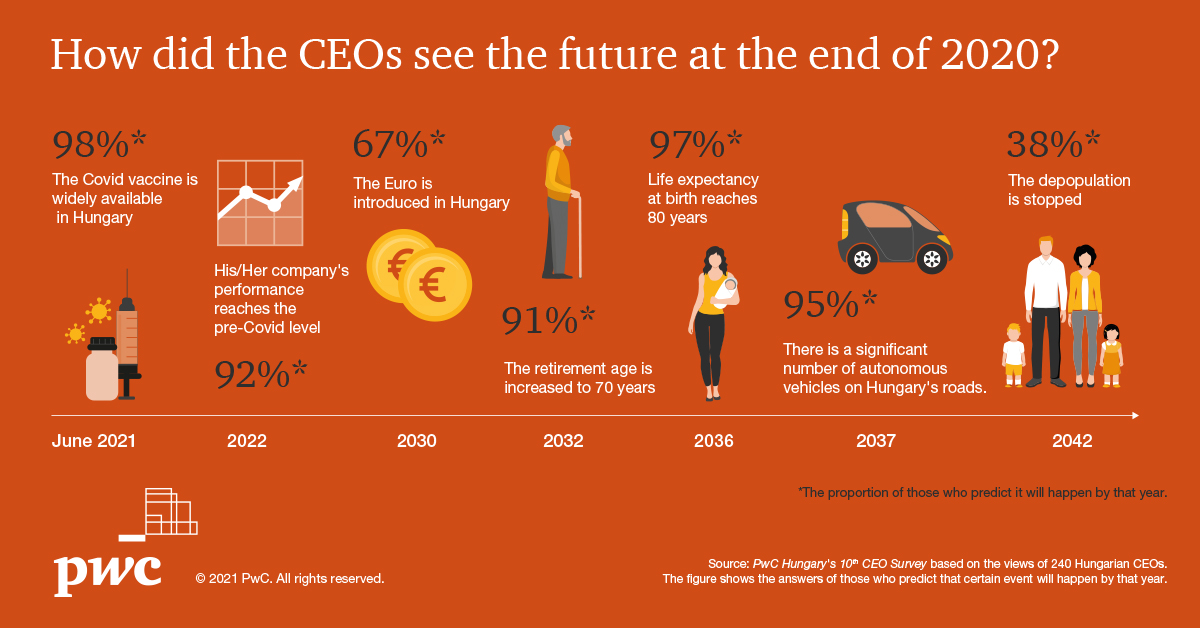 Having reached a landmark anniversary, there was an inevitable element of nostalgia to the business consultancy’s presentation, with a look back on the mood swings of the CEOs, the words of the year, and the development of the survey itself. Bori Palotai, head of marketing for PwC Hungary, said she had “followed almost all the data for the last 10 years,” and had even been among those asking the questions for the very first survey in 2011.

While the process of data gathering might have evolved over the years, the aim has not, she said. “Our objective is to understand you as much as possible, and to use that feedback to inspire you.”

The event was not all about the past, however; far from it. In addition to presentations from various senior members of staff, there were two invited guests who took a more long-term view: medical futurist Bertalan Meskó and Blair H. Sheppard, PwC’s global strategy manager.

Meskó spends much of his day thinking about what the future of medicine will look like, and what it should look like. He believes core to that is the involvement of the patient “at a high level of decision making.” Indeed, he went as far as to say that doctors “cannot prepare for the future unless they understand who they works for: the patient.”

He used the example of one of his favorite authors, Arthur C. Clarke, who was raised on a farm and whose family was too poor to send him to university. Instead, Clarke devoured science fiction works and successfully predicted much of what we see in the world today, including the internet and artificial intelligence, back in the 1960s, simply by repeatedly asking the “what if” question.

“‘What if’ prepares you for the future,” Meskó said. “If you can do this, you can respond in the future.”

Sheppard, author of “Ten Years to Midnight: Four Urgent Global Crises and Their Strategic Solutions,” was in conversation with László Radványi, head of assurance at PwC Hungary, who asked what a CEO’s first step on the journey into the near future should be? Sheppard said that involved an “honest appraisal of yourself and your organization. The more senior we are, the harder that is to do, because we tend to be more protected.”

The important thing was to recognize what the trends are, and to respond to them. “What COVID taught us was we can be way faster than we thought we could be, if we focus. Do not spread the peanut butter too thin, as we say here. Concentrate on what really matters. Engage in the first instance, do not do so after the event,” he added.

Wrapping up the event, PwC Hungary CEO Tamás Lőcsei said Hungarian business leaders would have three things on their agenda in 2021: “Sustainability and environmental consciousness; digital transformation and education and training; and cyber threats and other crisis contingencies.”

For a detailed look at the results of the 10th annual business leaders’ survey , see “PwC: Hungarian CEOs Bullish on COVID Rebound” in the March 26 issue of the Budapest Business Journal.

Millennium Gardens Opens with Over 90% Occupancy of Phase I

Hungarian Feed Companies Look to Ukraine for Maize Amid Shortage