With an increasingly global economy, the coronavirus-inspired tagline of “We are all in this together” rings true with the breaking down of supply chains and the lack of tourism due to grounded flights. It seems even more so for Hungary and Germany, whose economies are intertwined and rely on each other heavily.

Businesses surveyed by the German-Hungarian Chamber of Industry and Commerce (DUIHK) in the second half of 2019 were cautious about the economy. The increasing number of negative opinions signaled an economic slowdown, but not a halt.

DUIHK president András Sávos, speaking when the findings were published in November 2019, underlined that their comments should be viewed against the backdrop of the slowing of previously fast growth.

Then, in the early months of the new year, the coronavirus arrived to Europe and factories shuttered doors. As German automobile and automotive component manufacturing are an important engine of the Hungarian economy, the two countries have suffered together with the sudden break applied to their economies. Tourism is another vertical that received a heavy blow.

The two ministers agreed that Germany is one of the most important sources for Hungarian tourism, with German visitor numbers were up 20% in recent years. Expecting self-organized trips after the pandemic, the ministers had hopes of a renewed expansion in the sector.

The number of guest nights increasing by 60% from 2010 to 2019, last year the tourism industry’s weight in the country’s overall GDP exceeded 10%. Out of the 31.3 million guest nights spent in Hungary, more than 624,000 German tourists spent two million nights in the country, with 179 routes from major German cities. Given such a weight, Hungarian-German tourism relations clearly need to be restored.

Considering the significance of the automotive industry for both the countries, the two ministers also called for the quick recovery of the sector, tagging its reboot as a priority post-COVID-19.

“In the interests of preserving jobs, it may be worth considering the more rational scheduling of the introduction of the strict environmental requirements being imposed with relation to the sector’s participants,” Palkovics said.

The Hungarian innovation minister, during an earlier online meeting with German Minister for Economic Affairs and Energy Peter Altmaier in May, had touted Central Europe as a solution to help Germany shorten its supply chains, given geographical proximity and high competitiveness.

Altmaier has also previously talked about the shortening of supply chains and supplier diversification, proposing the bringing back of some capacities from Asia to Europe.

“Based on the experience of recent months, in the interests of shortening their supply chains German enterprises could be searching to an even greater extent for Central European opportunities, and accordingly could also be tightening their Hungarian relations,” Palkovics said.

A press release by his ministry noted that total foreign trade flow by the Visegrád Four countries (the Czech Republic, Hungary, Poland and Slovakia), of EUR 300 billion exceeded German-Chinese and German-American trade flow by almost 50%.

Nevertheless, in terms of foreign direct investments, Germany saw the emergence of a major rival last year. Speaking at an event announcing the investment of Samyang Biopharm in Hungary, Minister of Foreign Affairs and Trade Péter Szijjártó said South Korea had overtaken Germany in terms of FDI.

“2019 was the first year in which German investors did not bring the most investments, and South Korean enterprises took over first place,” the foreign minister said as cited by state news agency MTI. Last year, Korean firms invested over USD 2.5 billion, making up 48% of total investment in Hungary, which will lead to the creation of more than 4,500 jobs, the minister added.

What the future holds is hard to see. The United Kingdom fell into recession in early August as April-June GDP fell 20.4%. The economic outlook is grim globally, and in the European Union too. Assuming no further restrictions are introduced due to the second wave (and possibly subsequent recurring waves until a vaccination starts to control the virus) Germany’s GDP is foreseen as returning to pre-coronavirus levels by the beginning of 2022, according to German Economic Institute (IW), a private economic research institute.

IW expects German GDP to fall 6.25% this year and by 4.5% in 2021. The research institute noted that nothing had dragged down the German economy in the past seven decades as much as the repercussions of COVID-19. The summer brought a sliver of a silver-lining, and state aid and the construction industry started lifting up the economy.

Summer brought a fraction of sunshine to the Germany-dominated Hungarian automotive industry, too. Daimler’s first hybrid automobile, a silver Mercedes Benz CLA 250 e Coupe, rolled out of the factory in Kecskemét, driven by innovation minister Palkovics, to mark the start of serial production of two plug-in hybrid models: the CLA 250 e Coupe and the CLA 250 e Shooting Brake.

The plant had been closed for more than a month, like its peers in Hungary, due to the lockdown to help contain the spread of coronavirus. Given that the German manufacturer’s Kecskemét base employs more than 4,400 people and turned out 190,000 vehicles in 2019, both the Hungarian and German economies need to see those “silver arrow” cars moving en masse again. 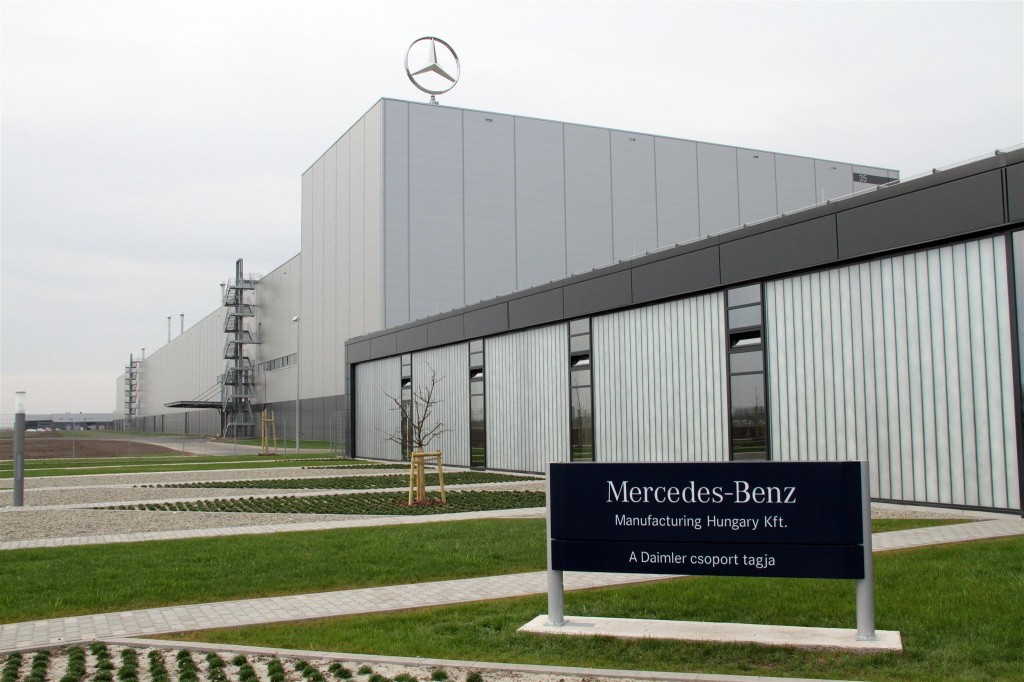 Foreign-owned Firms Accounted for 49% of Value Added in 2020

Foreign-owned Firms Accounted for 49% of Value Added in 2020