CEOs Should Maintain and Build on the Trust They Have Earned

For the second time in three years, PwC Hungary’s annual CEO Survey has been overtaken by unforeseeable (and hopefully short-term) events. But that doesn’t mean the long-term strategic threads that run through the study are not valid.

At the official launch of the 11th such study on Thursday, March 31, partner and event host Barbara Koncz recalled that the last time people met in person for the annual PwC event had been March 2020, when the survey launch had also been one of the final face-to-face gatherings before the COVID lockdowns came in.

In late 2019, when research for the 2020 survey was conducted, no one had seen the imminent threat of a pandemic around the corner. Now, lightning had struck a second time. Fieldwork for the 2022 survey was conducted between October and December 2021. Although geopolitical tensions between Russia and Ukraine were evident then, no one seriously thought war was likely until Vladimir Putin ordered his forces to invade.

Even in Budapest, however, it was not placed as a top-three risk. That dubious pleasure went, in descending order, to health, macroeconomic volatility, and cyber.

“It is clear from the responses that cyber risks could inhibit innovation as well as sales, while health risks and macroeconomic volatility could inhibit CEOs’ ability to attract and retain key talent and to sell products and services,” Koncz noted in the official PwC press release accompanying the survey.

“Those who worry about geopolitical conflict anticipate that sales could be impacted, followed by the ability to develop services. So even before the war, most CEOs saw supply chain disruptions as the most likely consequence of these threats,” she added. 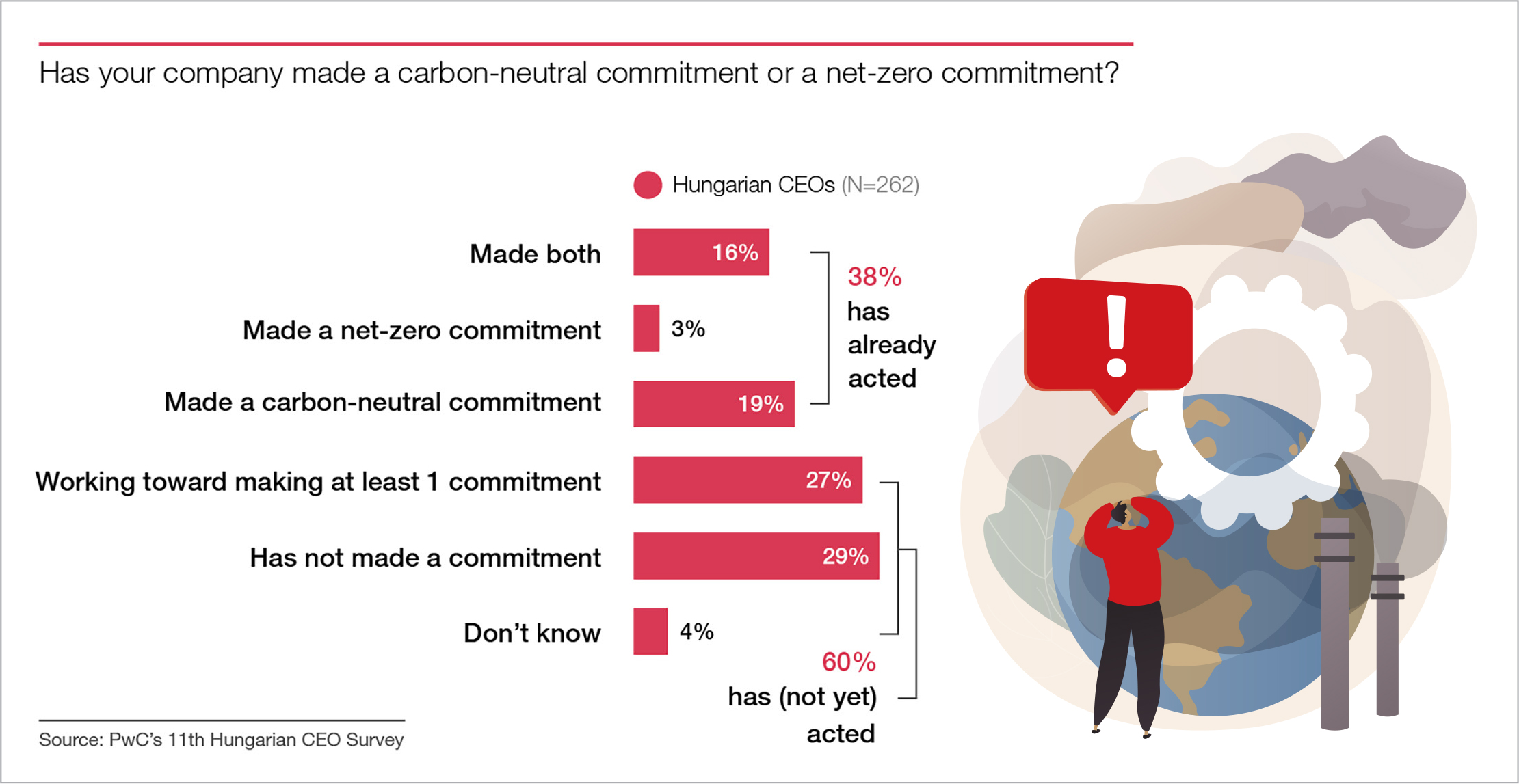 But perhaps Hungarian CEOs were just embracing the natural pessimism for which the nation is supposed to be famous. Even before the war, local CEOs were much more cautious than their global peers about their outlook for 2022. While 77% of global CEOs said they expected global economic growth to improve during the year ahead, only 46% of Hungarian CEOs did so (a marked fall from 65% in the previous year); the majority expected growth to stagnate or decline. Optimism about the powerhouse of Hungarian economic growth also waned, with more than half of Hungarian CEOs saying that a slowdown or stagnation was more likely in 2022.

Back at the event, Lőcsei noted that, amid this pessimism, and the plethora of risks out there, the past couple of years have at least proved that CEOs could cope with the unexpected. “This has drawn us out of our comfort zones. We had to learn a lot.” That is no bad thing. PwC has always advocated life-long learning and has long held that CEOs have to be multitaskers. But they also have to create and then be good stewards of communities of trust with their colleagues. “We will be successful if we can create communities that can solve problems,” he told the audience.

One interesting statistic Koncz highlighted from the 2022 survey was that of the 262 Hungarian CEOs interviewed, one-fifth were women, the highest proportion to date. That number was statistically significant enough to see if there were any differences in answers based on gender. For the record, there were not, just as there wasn’t any divergence based on industry or age, she added.

Other key takeaways from the survey included the fact that strategic company objectives are often not part of CEOs’ performance metrics, and that nearly half of Hungarian CEOs say they are unprepared for global tax policy changes.

Climate change, and the need to take action to combat it, was another potentially mission-critical field, of course, but it also threw up some interesting questions.

Inaction on climate change is widespread, the CEOs reported, despite a public background that sees clients and employees calling on companies to take urgent and decisive steps. PwC found that only 38% of Hungarian companies have addressed the issue meaningfully. One-fifth of companies aim for net-zero, which means cutting greenhouse gas emissions to as close to zero as possible, while 35% have committed to achieving carbon neutrality. 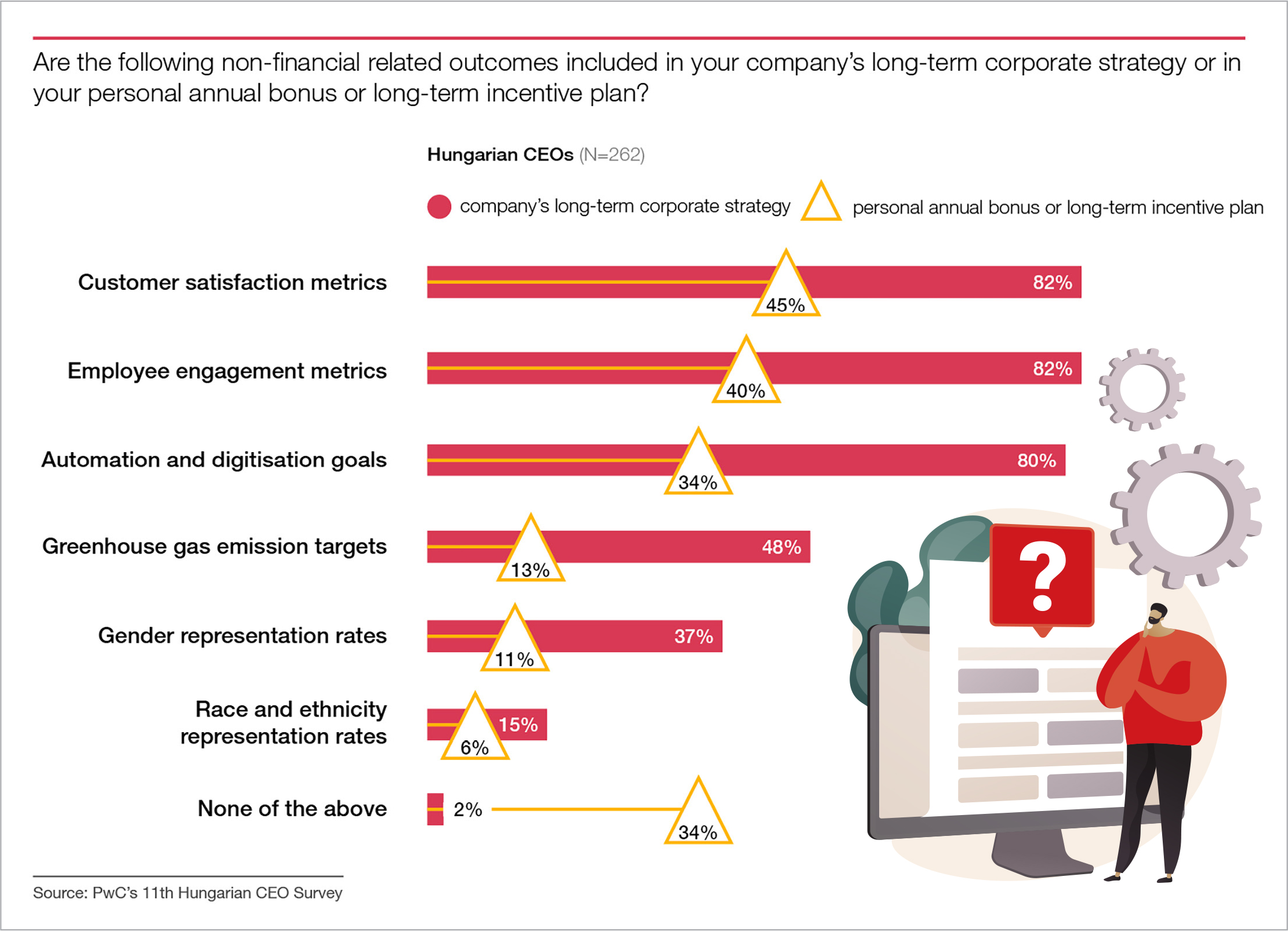 In addition to curbing climate change, the main reason for these commitments is to meet client and investor expectations. Meeting employee expectations were seen as the least important motivator identified by Hungarian CEOs.

Based on the survey findings, Koncz highlighted that, while CEOs’ performance is still assessed primarily against traditional business metrics, there is rising interest among investors and employees in long-term ESG goals. CEOs face a twofold challenge: they must meet both business and stakeholder expectations to maintain lasting trust.

“Trust” was perhaps the core theme both on the evening and in the survey. It may also be the basis for the best news for Hungarian CEOs. According to the Edelman Trust Barometer, faith in institutions and government decision-makers worldwide continued to decline in 2021.

In a typically light-hearted presentation, Róbert Bencze, the People & Organization Consulting director at PwC Hungary, identified government and the media [ahem] as the least trusted organizations and institutions, while NGOs and businesses were the most.

Lőcsei also reflected on this in the official press statement “In an increasingly volatile economic environment, members of the business community have gradually risen above other players in terms of the trust placed in them,” he argued. “CEOs and other business leaders remain the link of trust between the private and public sectors. They are the ones who are accessible and more directly accountable for their words and actions, especially in today’s tight labor market. Meeting these expectations requires more responsibility and new roles from us leaders,” he added.

But on the night of the launch, it was Bencze who had the best line, something from a priest he said he had read on the internet. It is also excellent advice for any CEO: “Remember, if you think you are a leader, but nobody is following you, you are just somebody who went out for a walk.” 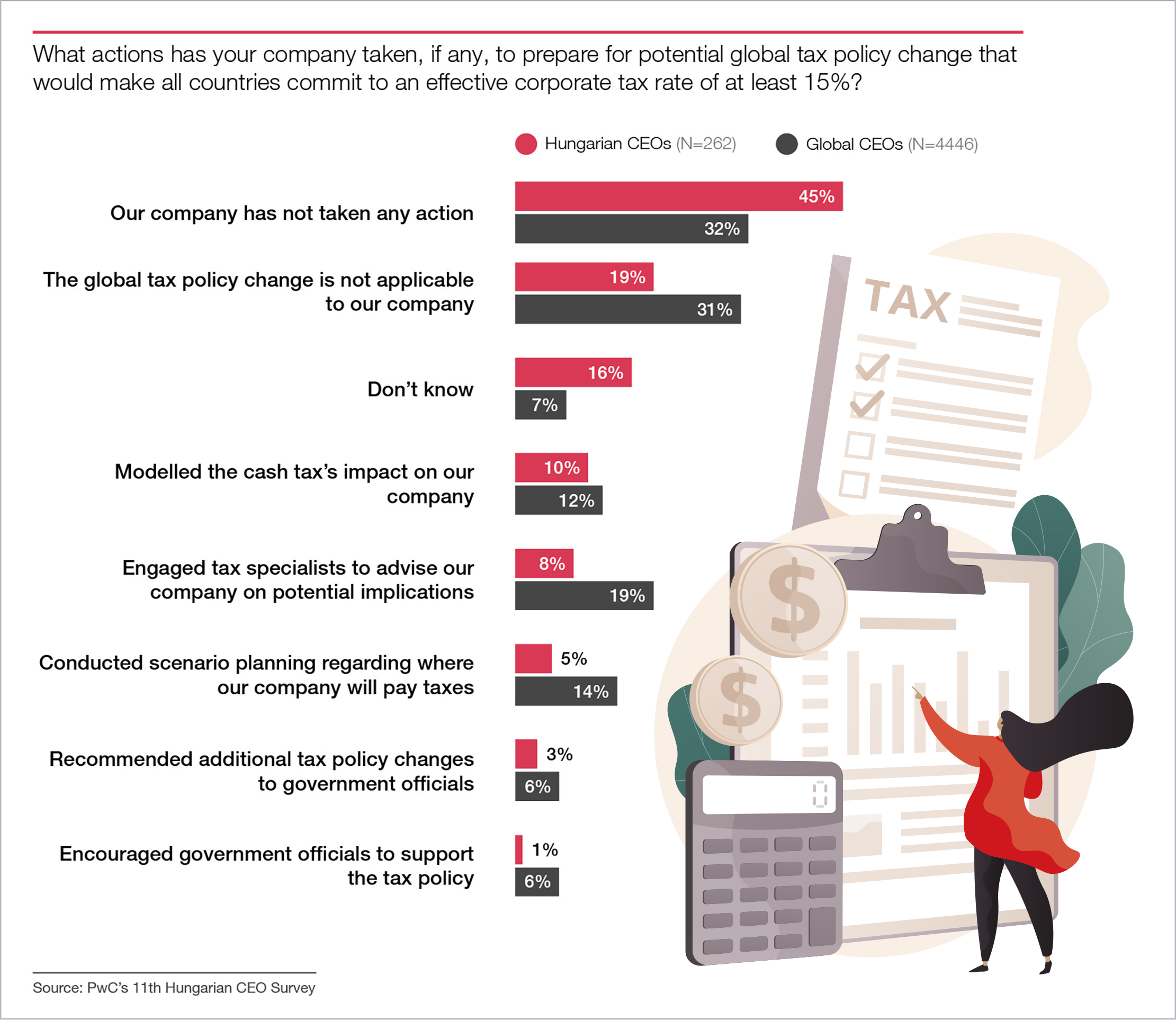 Aside from the PwC Hungary speakers, the official launch event also included three guest presenters: Vilmos Csányi, professor and chair of the department of ethology at Eötvös Loránd University, Budapest: “Belief, Trust, Community;” clinical psychologist Noémi Orvos-Tóth: “The Leader and his/her Fears;” and Katalin Sipos, director of WWF Hungary: “About the Future of the Earth.”

This article was first published in the Budapest Business Journal print issue of April 8, 2022.