AmCham Hungary Eager to Help U.S.-Hungarian Relations Back on Track

Although U.S.-Hungarian relations may seem at a low nowadays, last year’s reports on AmCham Hungary’s activities presented at the 34th general assembly and board elections evidenced the opposite. The outlook at the gathering, which saw senior officials elected, gave hope that things could take a positive turn at higher levels in the near future.

AmCham Hungary’s calendar was full of meaningful gatherings in the past 12 months. As President Zoltán Szabó pointed out, several ministers and ambassadors were hosted along the way, and the organization’s flagship events drew substantial attention, as always.

Cosponsored by the Hungarian Investment Promotion Agency, the Business Meets Government summit was dedicated to the energy crisis this year, which naturally attracted stakeholders in droves. But other occasions, such as the HR Dream Day and the first AmCham Sustainability Conference, were popular, not to mention the annual networking events marking the Fourth of July and Thanksgiving.

Secretary treasurer Mike Carlson told members that the finances are in good shape. During 2022, the finance department had been “very careful” with expenses, and the number of members had grown. Reserves in the form of bonds worth HUF 125 million provide a solid base for rainy days. The year 2022 saw profits reach HUF 14.3 mln, with revenues totaling HUF 203.9 mln.

As far as the upcoming year is concerned, membership retention remains a key focus area, as 70% of all revenues come from membership fees. Revenues are expected to surge significantly, together with costs, and an overall positive result is projected. Just as in 2022, cash flow forecasts will be updated and monitored weekly, and the board will review the budget and actual progress monthly. 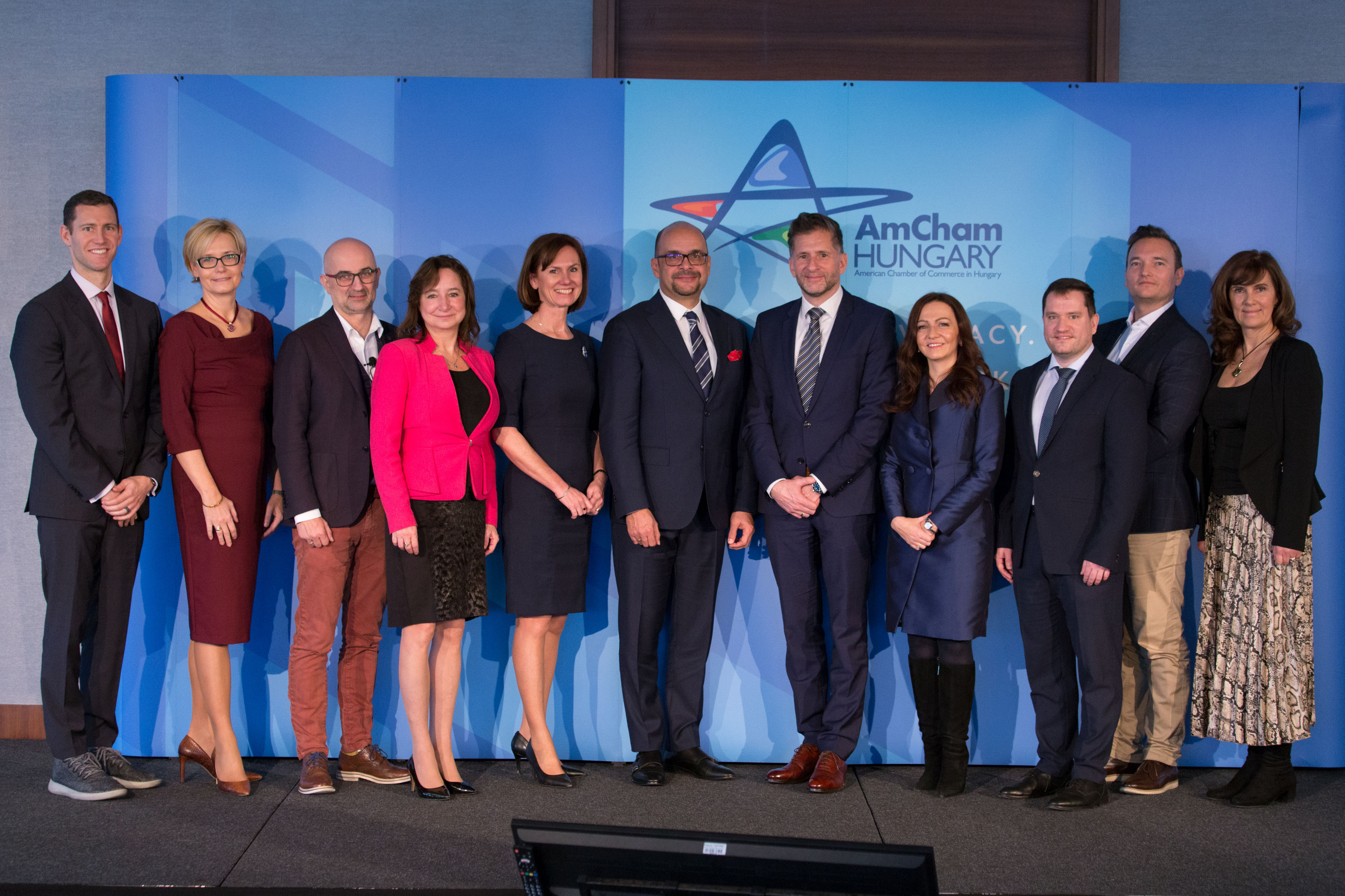 The newly elected board.

CEO Írisz Lippai-Nagy presented the annual plan for 2023, emphasizing the importance of continuous communication in advocacy despite the currently low level of U.S.-Hungarian relations, since that is the only way to help improve the competitiveness of the Hungarian economy.

She also encouraged members to be active and voice any issue they wish to be handled at the level of policy decision-making. A series of forums, including seminars, webinars, and state secretary and committee meetings, were available for that purpose, she said.

Several dedicated events provide an ideal platform for sharing insights and proposals. The compliance and healthcare conferences are just two examples; the Career Orientation program, the Board Simulation program, and the BSS Open Days serve a similar purpose, just like the various charity events in which AmCham is involved.

“Members need to deliver the content, and AmCham drives it forward and finds channels for the proposals to be processed,” Lippai-Nagy said.

Networking has the highest importance for members, the poll found, and they also would like to have more information on the work of committees and ways to contribute. On the other hand, best practice sharing through policy forums supporting the chamber’s Strategic Focus Areas should be strengthened.

Another fundamental expectation on the part of the AmCham community is that a platform should be provided to create new Working Groups to support the execution of the AmCham Policy Agenda. This readiness for action is a telling sign that committee work engagement would likely grow.

Charity support continues to gain significance at AmCham; one manifestation of the phenomenon is that, since 2021, the AmCham Foundation (ACF) has been operating as an independent CSR organization.

As Edit Bencsik, a member of the board of trustees, noted, the ACF continues to function as a bridge between donors and those in need.

“We achieved a lot of progress in the field of talent development, corporate volunteering, and foster home care, to name but a few areas,” she said.

The annual Dr. Iván Völgyes Award was also presented for the 16th time at the general assembly for the promotion of U.S.-Hungarian trade. This time it went to Róbert Ésik, who, in his capacity first as president and then CEO of HIPA between 2014 and 2021, was deemed not just to have brought in record-breaking amounts of foreign investment, but to have performed an excellent role in helping AmCham’s policy proposals find their way to decision-makers.

Fresh Blood for the Board

This article was first published in the Budapest Business Journal print issue of December 16, 2022.

Romania's Industrial PPI up in December