It is a “realistic expectation” that Hungary’s economy could grow by 5-6% in 2022, Minister of Finance Mihály Varga told the American Chamber of Commerce at one of his regular business forum meetings with the lobbying organization.

That growth reflects the strength of the region, the finance minister said, with 10 EU countries “already performing at the level before the pandemic.” Top of the list is Ireland, but that benefits from the multinationals based there for tax reasons, Varga pointed out. The remainder were from the Baltics and Central and Eastern Europe.

“Hungary has been able to return to the growth path even though tourism, which generates 8-10% of GDP, has not returned,” the minister told AmCham members.

The detailed analysis of GDP data necessarily takes time, he noted: Q2 closed in June, but exactly how well the economy had performed could only be seen when all the numbers had been crunched at the end of August.

To try and bridge that gap, the government has developed what Varga called the “weekly economic index,” which pulls data from online cash registers, Google searches for products and services, and the like.

That weekly snapshot reveals that despite the shutdowns of German and Japanese automakers because of the global microchip shortage (a move that the minister confessed had left him “rather alarmed” initially), Hungary is “still doing well.”

Varga said there was an excellent chance “of recording good figures” for the full year in 2021, a view he said was shared by analysts. “Some experts say we might reach 8% [GDP growth]. I would be very happy with that, of course, but I would also be happy if we reached 7-7.5%. Even the most pessimistic say 7% GDP growth can be counted on.” 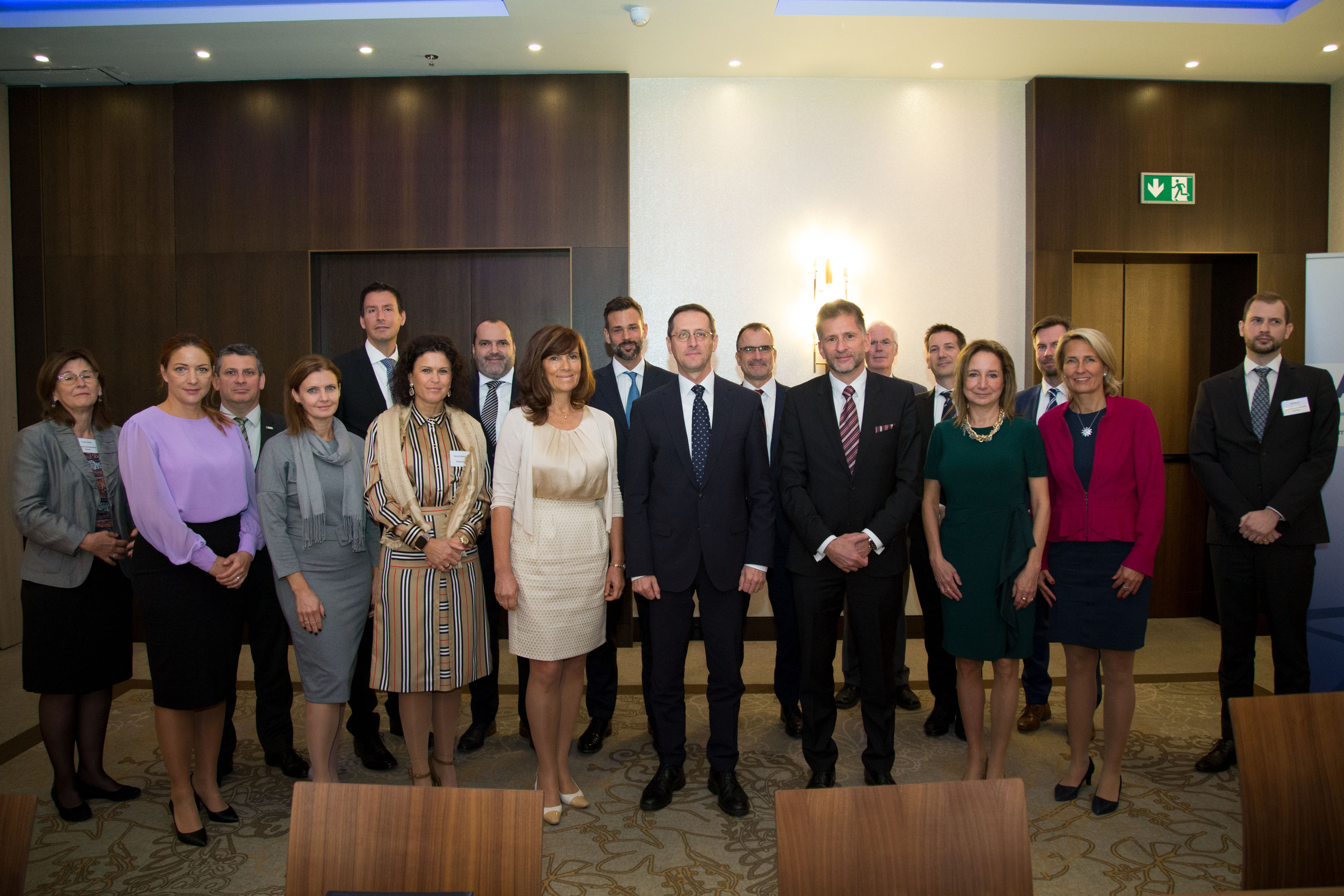 Minister Mihály Varga with members of the AmCham board.

Further evidence of the “dynamic” nature of Hungary’s economic growth could be found in the recent upgrade by Moody’s Investor Services, one of the three major international rating agencies, to Baa2.

“Moody’s cannot be described as ‘friendly’ to the Hungarian economy, so we were surprised when it upgraded. It is still far from an ideal situation; we are not yet at [the highest] triple-A level, but we are working on that.”

The minister acknowledged that there were some “dark clouds on the horizon.” He highlighted four, including fuel and energy prices, along with inflation, which he said “goes hand-in-hand with relaunching the economy” but was “above the expected level everywhere.”

Thirdly, “The virus itself is not yet over,” he warned, “there is going to be a fourth wave.” Mutations of the virus also presented a threat, as evidenced in Israel. “There might be a situation where we have to introduce measures to prevent the spread of the virus.”

The fourth cloud he characterized as a “lack of things” such as those automotive microchips, or the recent fuel crisis in the United Kingdom, prompted not by a lack of fuel, but a lack of HGV (heavy goods vehicle) drivers to transport it. He also cited a lack of labor in construction and the lack of containers hitting logistics operations. “That was not there before but is characteristic of our period.”

Although not one of his “four clouds,” Varga also made a pointed reference to the lack of EU approval for Hungary’s Recovery and Resilience Facility (RRF), the negotiations over which were supposed to be concluded by the end of September.

The RRF makes loans and grants available to support post-COVID reforms and investments. The aim is to mitigate the economic and social impact of the coronavirus pandemic and to make European economies and societies more sustainable, resilient, and better prepared for the challenges and opportunities of the green and digital transitions.

“It is ready to launch; however, we are still waiting for EU approval.” Thus far, 19 EU member states have had their RRF plans approved, most recently Malta on October 5. From the region, the Czech Republic, Croatia, Slovakia, and Slovenia have all been greenlighted, but not Hungary or Poland. Varga said the reason for the delay was “political.” Unless funds are released soon, “we will be left behind,” the minister feared.

Hungary had therefore conducted “very successful” FX bond issues in dollars and euros to “make up for missing EU funds.”

An audience member asked what the government was doing to improve competitiveness since Hungary is only mid-table within the EU. The minister pointed out that he chairs the advisory National Competitiveness Council, set up in 2016, and featuring key scientific and economic players, the president of AmCham among them.

“We have been able to take steps forward, competitiveness did improve, but I am not yet satisfied. [….] The Hungarian economy has to become more competitive.” The solutions are complex and long-term, he said. One example he gave was that of life-long learning. In Hungary, just 10-11% of Hungarian adults are enrolled in adult education. “In Austria, the level is 40-50%: Definitely, we have to follow that.”

Asked about the landmark global minimum tax (adopted by the OECD later that day), Varga replied that “We are not planning on changing our stance,” that setting taxes had to remain a national, rather than EU, competence. He praised the “very intensive cooperation within the EU and outside” to reach an agreement. “I would like to thank the U.S. Treasury for their contribution” to finding a “good compromise,” he added.

The OECD, the G7, and the United States had all proved flexible, the finance minister said. That cooperation had resulted in an agreement that had been “really hard-fought” and was, he thought, “unprecedented.”

This article was first published in the Budapest Business Journal print issue of October 22, 2021.

MNB expects inflation to peak in the fall

MNB base rate could climb above 10%, City analysts say

Households continue to make net withdrawals in May