The circular route from fossil fuels to hydrogen

As the global demand for energy increases, countries must address the issue of their energy needs through better resource management. In the case of Hungary, while results have been achieved in some areas, a more comprehensive approach is needed; the country has taken a significant step to enhance its efforts with the launch of the Circular Economy Technology Platform.

Hungarian households have long been using selective waste collection, and social awareness regarding green technologies and carbon footprint reduction has also increased. However, challenges in this area need to be managed within a broader framework so that the isolated initiatives can merge into an efficient and seamless system, environmentalists say.

This framework must be designed following basic principles that aim at eliminating waste and pollution, circulating products and materials, and promoting the regeneration of the natural environment. Unlike those of the traditional linear economy, these principles form the core concept of a circular economy, a new model of production and consumption.

The idea behind the circular economy is to keep raw materials, products, and even equipment and infrastructure in use for as long as possible by employing reuse, sharing, repairing, refurbishment, remanufacturing, and recycling.

One such example is vehicle sharing, available in Hungary (especially, but not exclusively, in Budapest) for cars, scooters, and bikes. These programs come with several benefits: fleets are managed more efficiently, with regular maintenance resulting in reduced waste and pollution outputs, while clients save money by using vehicles only when they need them, paying for the services through minutes-based fees.

Car sharing is a concept that would not have been feasible 10 years ago, experts tell the Budapest Business Journal. It came to fruition by combining several technological achievements: smartphone apps, mobile networks with broadband data transfer, electric cars, and advanced GPS location services. More such projects would significantly contribute to the creation of a circular economy. This process can be catalyzed further with the involvement of state incentives.

The Circular Economy Technology Platform, launched on March 11 in Veszprém, aims to become such a catalyst in accordance with Hungarian and European strategies.

At the inauguration event held at the University of Pannonia, Minister of Technology and Innovation László Palkovics, representing one of the platform’s leading partner organizations, said that the new initiative not only enhances dialogue and cooperation but will also serve as an important actor for an environmentally conscious and sustainable economy.

One of the most important sectors in Hungary is the automotive industry, which is currently undergoing significant changes. As the world increasingly turns towards electric cars, the demand for batteries inevitably increases, the minister pointed out.

Another priority would be developing hydrogen cell fuel technology. Hydrogen is an environmentally friendly source of energy. While the storage technology for this source is not yet available on a large scale, hydrogen is already used as fuel in experimental bus prototypes, the minister added.

“We do not aim to use less energy but to use exactly as much as is necessary and, ideally, to minimize waste,” Palkovics concluded.

Waste management is another area needing further work, not only in the recycling of communal waste but also of construction and agricultural waste, the minister added.

Palkovics has appointed Zoltán Birkner, the National Research, Development, and Innovation Office president, as head of the newly created Circular Economy Technology Platform. In his keynote speech, Birkner said workgroups would begin sessions in May, and by the end of the year, they will be able to present several recommendations to the government. 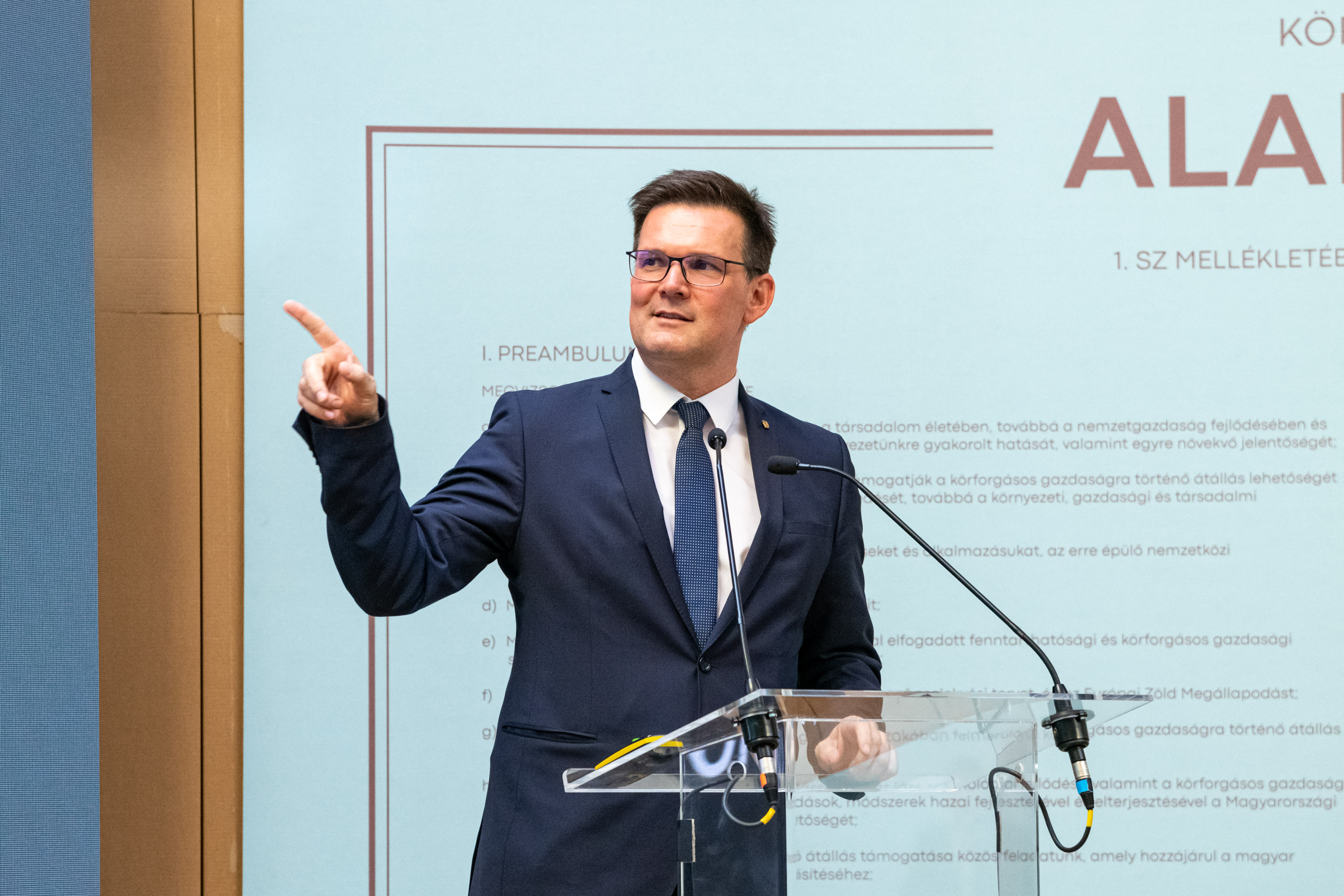 This will be an essential task for the board, with members selected to represent the economy vertically, with companies taking part in the circular economy, but also horizontally.

“We need to create both the regulator and the consultancy capabilities for this body,” Birkner said. He added that it is important to set up contacts not only locally but also on a regional level.

Attila Steiner, Deputy Minister in the Ministry of Technology and Innovation, outlined the financial opportunities for 2021-2027. He admitted that Hungary is lagging behind other countries in several areas. The ministry has set targets that are needed not only to access European funds but also to serve as a catalyst for economic development.

Zsolt Hernádi, CEO and president of MOL Group, the Hungarian oil and gas giant, noted that more than 80% of energy sources are related to fossil fuels, which need to be gradually replaced in the future. One of these fossil fuels is gas, dependency on which can be significantly reduced, although it requires major investments and a lot of work. A solution for bridging over the interim period may well be implementing a circular economy, Hernádi said.

The board of the Circular Economy Technology Platform