Although it has been around for decades, climate goals gave a new momentum for hydrogen technology that enjoys renewed and rapidly growing attention worldwide. Due to its versatility, hydrogen has been described by many as the Holy Grail of decarbonization. Harnessing the full potential of hydrogen has huge potential but there are still many open questions that must be answered. Speakers representing the entire hydrogen value chain discussed these questions at the Budapest Hydrogen Summit organized for the first time on March 10. The conference brought together high-level policymakers, major industry stakeholders, and experts from the CEE region and beyond to encourage cross-sector dialogue and knowledge-share, which is essential to the rapid scale-up of the hydrogen economy.

The conference was opened by Pál Ságvári, vice president of the Hungarian Energy and Public Utility Regulatory Authority (MEKH) who emphasized that hydrogen will play an important role on the road to a carbon-free economy adding that Hungary is no exception as Hydrogen Strategy has been adopted last May.

He emphasized that, while in the long term the Strategy focuses on green hydrogen, Hungary does not ignore the potential of hydrogen production based on nuclear and in more general grid-supplied carbon-free electricity as all types of low-carbon hydrogen will be needed in the short and medium-term to rapidly reduce emissions and to develop a viable market. 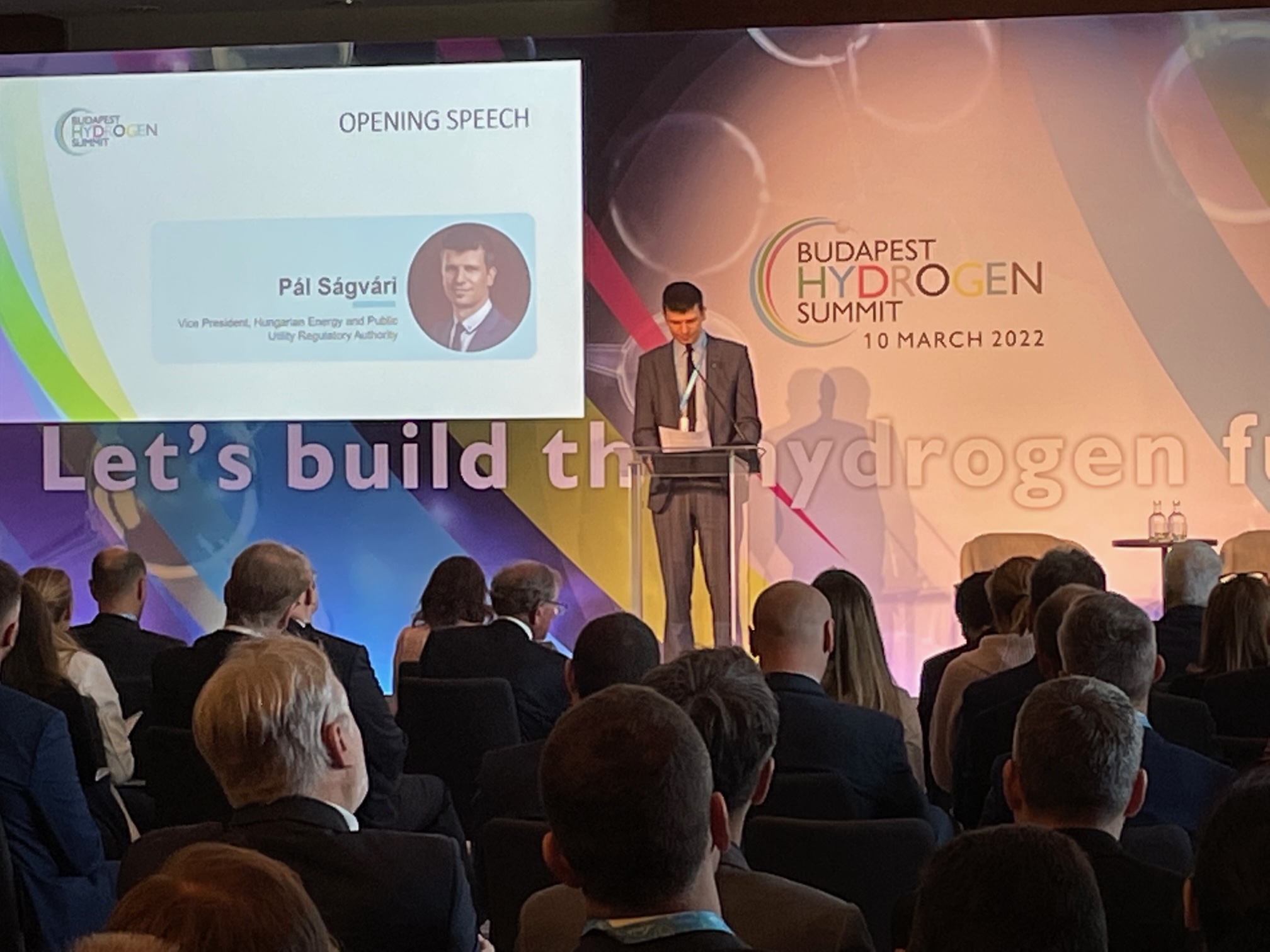 On the margins of the Budapest Hydrogen Summit, MEKH and the Hungarian Hydrogen Technology Association signed a joint Memorandum in order to foster industrial, economic, and scientific cooperation necessary for the establishment of the Hungarian hydrogen economy.

Jorgo Chatzimarkakis, CEO of Hydrogen Europe underlined that now is the moment for the EU to accelerate the deployment of hydrogen technologies by replacing, repurposing, and reinvesting.

"This week the European Commission come up with a plan, the EU Hydrogen accelerator. The number that is mentioned in that paper is 20 million tons of renewable hydrogen by 2030. This means that we have to quadruple the amount that has been given to us last June,” said Chatzimarkakis adding that this means that hydrogen quite soon will become a global commodity.

The conference also focused on the challenges and opportunities ahead of the hydrogen market. Thomas Schubert, partner of Dentons Berlin underlined that one of the obvious challenges is that green hydrogen is much more expensive than conventionally produced grey hydrogen and it also has no real market, so a market needs to be created. He emphasized that regulatory challenges have to be tackled.

"What is important is speedy permitting processes to shift towards carbon-free hydrogen,” he said.

"We have an infrastructure available to transport and distribute the gas,” started Zoltán Jászberényi, CEO of Pietro Fiorentini Hungary. „So the big question is, how is this infrastructure fit for the new challenges and how much can we fit it to accepting the higher volumes of hydrogen. Regarding the blending of hydrogen with gas, he underlined that the three major issues gas grid operators need to tackle is the safety issue, accessibility and sustainability.

"For many parts of Europe only gradual blending of hydrogen with gas will be possible,” said Szabolcs I. Ferencz, Chairman and CEO of FGSZ Hungarian Gas Transmission. "By 2025 we have to be able to receive 5 per cent blending and it is a huge task”, acknowledged the CEO of FGSZ.

The company joined the European Hydrogen Backbone initiative, recognising that hydrogen transportation can be a good alternative after the decline of natural gas utilization.

Hungary’s flagship Akvamarin pilot project managed by MVM group will install an electrolysis system with a total capacity of approximately 2.5 MW at the Kardoskút underground gas storage facility. The construction of this system will bring significant energy storage innovation and will contribute to balancing the electricity system. By using excess electricity, the electrolyzer will ensure that hydrogen is produced instead of "switching off" the renewable energy source, explained Ákos Kriston, CEO of Hungarian Gas Storage.

"We understand that charging is not only about the investments but also a lot of regulations. So there is a clear goal that charging stations should be built” he said.

Gáspár Balázs, managing director-CEO of Alstom pointed out that hydrogen trains as the one commercialized by Alstom are already proven in commercial operations in several countries and the technology is becoming a viable alternative for non-electrified lines.

“Hydrogen fuel cell-powered passenger trains have the capacity in the CEE region to decarbonise the railway industry. In Hungary, more and more decision-makers are turning towards hydrogen technology. Thus in 4 years, we will see a full deployment of hydrogen passenger trains in the country” he said.

Speakers joined from all around the world to share their perspectives on the future of hydrogen. Japan is considered to be one of the frontrunners of the hydrogen economy. 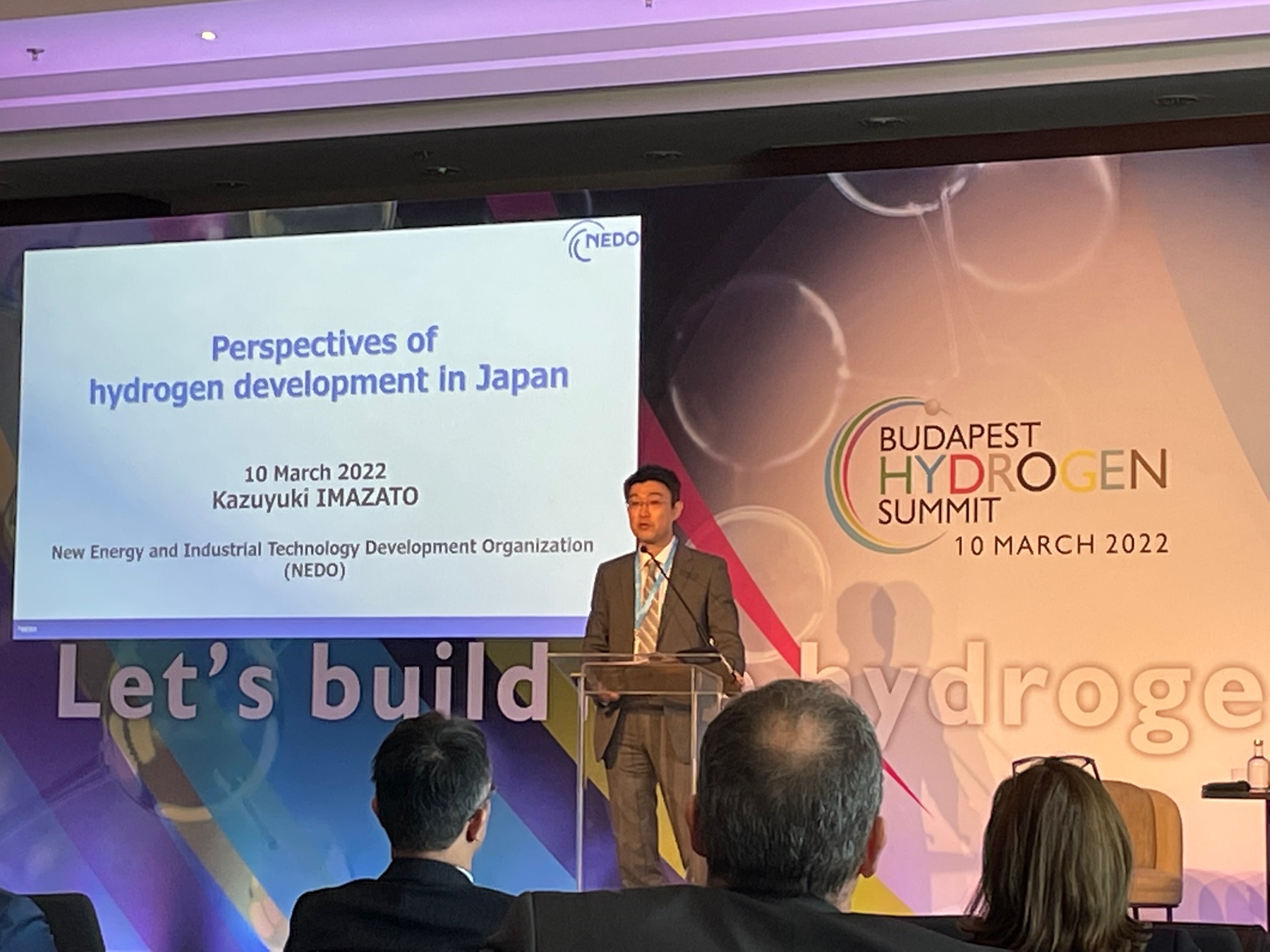 Stefan Kaufmann, innovation commissioner for Green Hydrogen of Germany underlined that no hydrogen strategy is a guarantee for success, we need global collaboration and the establishment of global hydrogen chain supplies. He highlighted that collaboration in research will open doors to the development of the hydrogen economy.

"We have an opportunity to shape a market of future and for this, we need collaboration across sectors, we need in-depth exchanges between technology inventors and investors. We will have a hydrogen economy if we work together” he said.

Oleksandr Riepkin, president of the Energy Association “Ukrainian Hydrogen Council” who joined the conference online emphasised that even though it was hard for him to talk about the future in conditions of war, Ukraine has the capacity of producing 10 GW of electrolyser capacity in line with European Hydrogen Strategy 2030. He stressed that Ukraine has one of the biggest gas transport systems which is suitable for delivering both pure hydrogen not mixed hydrogen.

The Budapest Hydrogen Summit presented a unique opportunity for stakeholders of the hydrogen value chain in Central and Eastern Europe to showcase their idea, strategy or project and to shape the hydrogen agenda of the region. Due to the great success of the conference, White Paper Consulting will organise the Budapest Hydrogen Summit next year as well.