Roundtable discussion on “The Role of Energy Storage on our Path to Net-zero.”

The second Hungarian Battery Day, organized at the Hotel Marriott Budapest by the Hungarian Battery Association and White Paper Consulting, reviewed the opportunities and challenges for the fast-developing Hungarian battery industry on October 20. Minister of Foreign Affairs and Trade Péter Szijjártó, who opened the event, was the honorary patron.

Hungary’s recent successes in battery production and discussions on the progress and means to make the industry a success took center stage. In terms of battery production capacity, Hungary ranks third in the world and fifth when itcomes to exporting the technology.

The Hungarian government sees massive potential in the battery industry as the flagship of the transition of the automotive sector. Itsstrategic objective is to keep up with new industry trends by becoming an essential player in the battery production value chain, Szijjártó toldthe audience.

Batteries are in the spotlight, not least because they support the green transition. Developing energy storage solutions can significantly contribute to the sustainable reinvigoration of the transport and energy industry, bringing the world closer to climate objectives.

Kicking off the conference, Péter Kaderják, managing director of the Hungarian Battery Association, said that the battery industry is “not only about markets, it is also about people,” highlighting that “people, not institutions, make great stories.” Kaderják added that Hungary is at the forefront of the green transition, including within the automotive industry.

According to Kaderják, Hungary’s battery industry is a fast-growing sector, almost doubling investments inrecent years, recording EUR 7 billion in FDI. Consequently, 14,000 jobs have already been created, and future investments could see this figure rise to25,000. 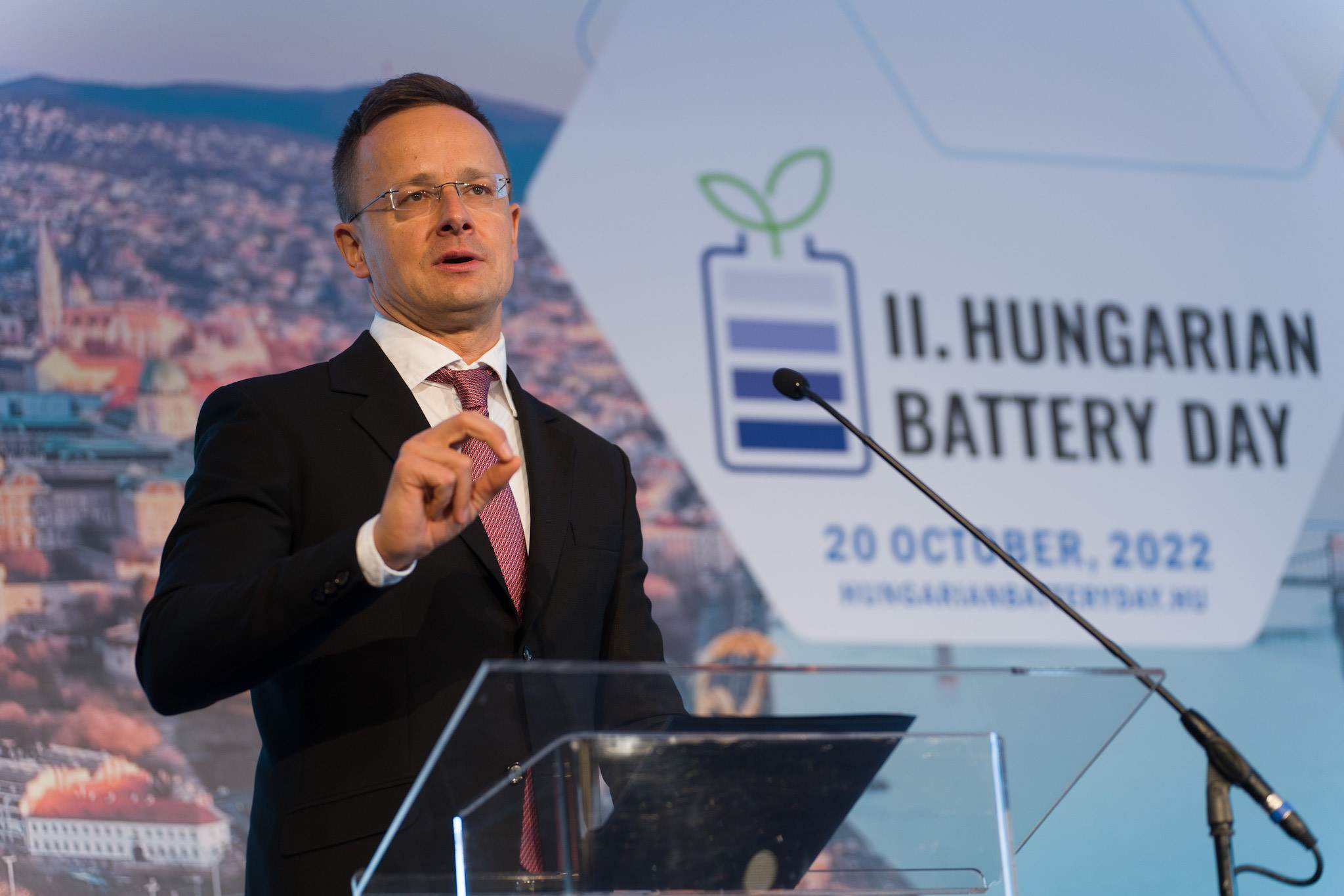 Looking at Hungary’s developments from a long-term angle, foreign minister Szijjártó said that “the goal of the government is to make Hungary the meeting point of the Western and Eastern economies.” He highlighted that flagship German automotive producers such as BMW and Mercedes continue to expand their operations, including EV production, in Hungary.

Regarding state support, Secretary of State Responsible for Energy Policy Attila Steiner recalled the government’s recent EUR 16 bln investment package and highlighted the importance of the battery industry, noting that “batteries have a competitive advantage.”

During a discussion on Hungarian success stories, Zsolt Dobó, a research and development expert from Metal Shredder Hungary, said that the current crisis could be more of an economic opportunity for the industry rather than a threat. One of his firm’s critical objectives is recycling lithium-ion batteries and closer engagement inR&D activities.

From a European perspective, Thore Sekkenes, director of the European Battery Alliance (EBA) Program, was optimistic about the industry’s future, especially when compared to what it was in 2017 when it all started. By 2030, the EBA expects to have one terabyte of capacity installed.

Narrowing the discussion to electrification, Cillian O’Donoghue, policy director from Eurelectric (a sector association that represents the interests of the electricity industry at a European level), pointed out that every member state sees electrification as the key to decarbonization. Considering this, O’Donoghue said, “we need to invest heavily in networks.” It is estimated a EUR 4 bln in investments are required in European grids, he explained.

Csaba Kiss, deputy CEO, chief generation officer, and chief nuclear officer at MVM Hungarian Electricity, pointed out that by 2050, battery capacity will need to be five times higher than it is today.

During a discussion on energy storage, Péter Horváth, CEO of the Dunamenti Power Plant, noted that the key developments must be driven by the market design. “Once you set targets, you need to redesign the market to meet them,” he reckoned. Róbert Szabó, director of smart PV solutions at Huawei, believed that the energy storage sector is “on the right path,” noting suitable investments in the grid. However, he also underlined that closer attention needs to be paid to finding short-term energy storage products.

During a separate keynote speech, Tjerk Raske, European head of marketing for technology manufacturer Dräger, highlighted the importance of growing the battery industry by underlining its compatibility and contribution to achieving the UN Global Goals for Sustainable Development.

Representatives from the automotive industry discussed the intertwined link between electromobility and energy storage and the importance of looking atthe whole battery value chain.

Martin Schuster, vice president for battery cells and cell modules at BMW, pointed out the crucial role of raw materials, which make up to 80% of a battery’s car. Balázs Szilágyi, senior government relations manager at Contemporary Amperex Technology Limited (CATL, the world’s largest battery manufacturer), reckoned it is essential to look at R&D from a broader sense, considering areas such as innovation of production.

Looking at the regulatory landscape, Ákos Nagy, senior counsel from regional law firm Kinstellar, outlined the main aspects of the European battery regulation coming into force in 2026 and how the industry can be ready for it. He said the rules would mainly influence manufacturing and distribution processes and how businesses report ontheir carbon footprint.

In the last panel discussion, regional experts from Hungary, Poland and Slovakia discussed the importance of cross-border cooperation to seize the opportunity of the e-mobility transition and presented the common challenges that CEE is facing. These include a lack of awareness among the wider public, businesses and decision-makers. However, the mindset is already changing.

In his keynote speech, Robert Gaylen, CTO of CATL, chairman of the U.S.-based SAE International (formerly the Society of Automotive Engineers) battery standards steering committee, and also an SAE international fellow, highlighted how people are no longer afraid of EVs. Nonetheless, education and training are required at all levels, he added.

This article was first published in the Budapest Business Journal print issue of November 7, 2022.