Photo by the Ministry of Technology and Industry

Representatives of the Hungarian government discussed energy and economic issues with representatives of German companies operating in Hungary at a meeting organized by the German-Hungarian Chamber of Industry and Commerce (DUIHK) last Friday. During the event, Minister of Technology and Industry László Palkovics; Minister of the Prime Minister's Office Gergely Gulyás; and Secretary of State for Energy Attila Steiner were guests of the chamber. The event was also attended by the Vice President of the Hungarian Energy Agency MEKH, Pál Ságvári.

The event revolved around the new challenges brought about by the energy crisis, a rise in general inflation, a tense budget situation, and the resulting burdens for businesses. Current issues in German-Hungarian relations were also the subject of the meeting.

In his presentation, Palkovics emphasized that before the war in Ukraine, Hungary's energy security was guaranteed, so more attention was paid to sustainability issues, but the war in the neighborhood shifted the focus on energy and supply security once again.

He argued that comprehensive strategic measures must be taken to strengthen energy sovereignty and reduce dependence, as there are rapid daily changes and unpredictable movements on the market.

He demonstrated four scenarios, each crafted with a different degree of optimism, which could occur in the upcoming heating period. 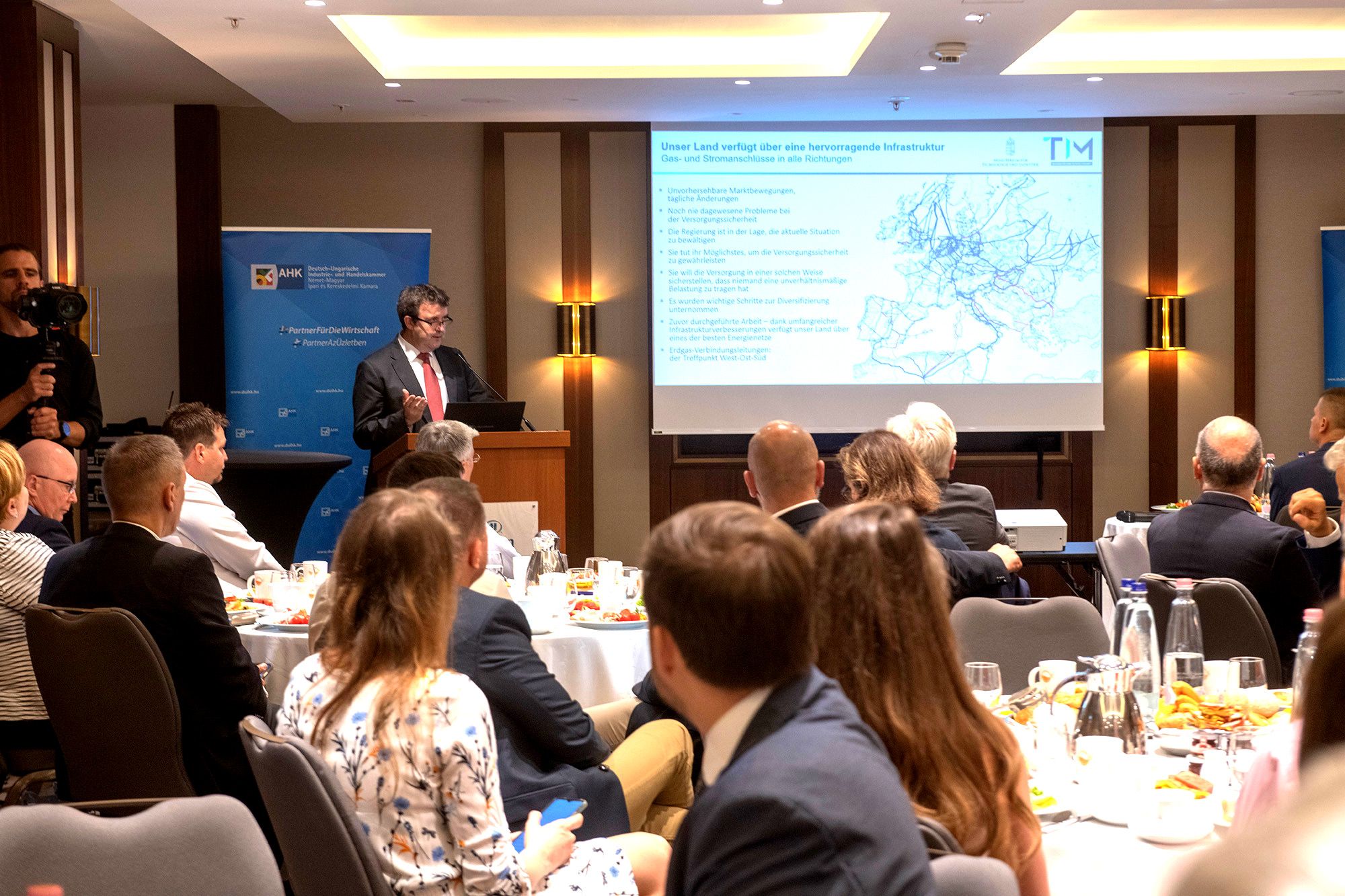 László Palkovics speaking at the event. Photo by DUIHK.

In the first, most optimistic scenario, gas imports through Serbia work perfectly, imports from Austria are half the usual amount, and this mix is rounded out by a small amount coming from Romania. In this case, consumption in Hungary does not need to be reduced, and about a quarter of the strategic storage will remain available, just in case.

In the second scenario, no Austrian import is available. If Hungary manages to fill up its storage capacity with about 0.7 billion cubic meters of gas, there will be dire no need to reduce consumption, but saving 2% and introducing new measures in addition to the transformation of the utility cost reduction program could be useful if the country does not want to fully exhaust its emergency stockpiles.

In the third scenario, gas would only be supplied through TurkStream. In this case, the storage facilities would be exhausted before April with normal consumption, meaning that a reduction of 3-6% would be required.

In the fourth, most pessimistic scenario, Hungary would have to rely only on alternative sources from Croatia and Romania. In this case, a reduction of about 10% would be needed in case Hungary had some 730 million cubic meters of gas in storage in order to avoid depletion. A 13% reduction in consumption could ensure that stocks are still sufficient even in the worst-case scenario

András Sávos, President of DUIHK, noted that it was reassuring for German companies to hear that the government has several scenarios for what action to take in the energy situation. He said that they had a good discussion on energy and economic issues.

"We are living in times when dialogue has a big role to play," he said.