The Coronavirus pandemic that exploded in early 2020 has been a disaster for most businesses around the globe. But in specific niche sectors, it provided an unparalleled opportunity for growth. One such, which has had little publicity, is biological coatings that kill germs and viruses. It is a fast expanding sector, and Hungary has an international champion: Resysten.

Shajjad Rizvi at times indicates frustration with journalists who talk only about his product in relation to COVID.

“Resysten was developed eight years ago to deal with pathogens that lead to all types of bacteria and viral outbreaks, not just COVID!” he barks in an emailed answer to a clarification question. “We are a hygiene company and product that's dealing with all type of hygiene issues. Resysten keeps surfaces clean!” he adds.

However, the chief executive of Resysten, a company with its production unit based in Törökbálint, a village just 16 km southwest of central Budapest, concedes that it was the pandemic that has been behind its international rise in fortune.

After slow, plodding work over seven years on Resysten (the company is named after its product), with the appearance of COVID in 2020, “Things went bonkers,” as Rizvi told the Budapest Business Journal in a face-to-face interview.

Yet even the plod into Resysten’s home market had difficult beginnings. Hard-pressed managers in any company, let alone short-staffed hospital directors, had little time to consider an email from an unknown company founded by a couple of non-medical professionals.

In one trial, the company applied Resysten to the entire HÉV suburban train fleet of 294 carriages, treating crucial surfaces such as handrails touched by thousands of passengers every day. In April 2017, on the Budapest-Gödöllő line, all 22 three-car units were treated in less than 24 hours, with dramatic results: scientific checks on critical surfaces three months into the trial revealed an average decrease in pathogens of 90%.

Later tests on the moving handrails of the Budapest metro station escalators, one of the most complex challenges imaginable for the Resysten scientists, proved even more effective over time.

With the onset of the COVID pandemic, the hard work began to pay off, and with the phones almost constantly ringing, the meticulously recorded trials made frantic enquirers pay attention. But even then, numerous hurdles blocked the immediate take-up of orders, not least national approval for use in a hygiene sector where the technology is still being pioneered.

“It’s all relatively new. The active substance generated is free radicals generated from the interaction with light. But these radicals have not been processed in full by the European Chemicals Agency (ECHA), so approval of coatings such as Resysten is determined on a country-by-country basis,” says Shajjad.

“We have undergone extensive testing, safety, durability, and efficiency tests, but each test costs a small fortune and combined with the fees paid for access of use in each country, the costs quickly mount up,” he explains.

In 2020, Resysten made headway with successful trials in countries such as the Czech Republic, Ireland, and Ukraine, and in the airline industry, a sector desperate for a eureka solution to restart operations and reduce the massive increase in time and costs caused by intensive hand cleaning after every flight.

But with regulators fearful of a scandal erupting from any hasty decision, however good the intent, obtaining national approval anywhere proved elusive.

Then, in June this year, the Irish regulator approved Resysten as a biocide disinfectant “used for disinfection of surfaces, materials, equipment, and furniture,” and permitted in such areas as offices, healthcare facilities, public transport, and hospitality facilities.

“Now, in Ireland, we are on a rollercoaster, with shops, gyms, hotels, pubs, and even churches asking for treatments,” says Shajjad.

In the Czech Republic, SAP, Pilsner Brewery, and a string of tattoo parlors in Prague are now using Resysten coatings, while outside the European Union, Ukraine has applied the product to 150 ambulances.

Naturally, the results also show in revenues. Turnover in 2019 was a modest EUR 500,000, rising almost three-fold last year to EUR 1.4 million. “We could be looking at EUR 2 mln this year, including international orders,” Shajjad estimates.

For the immediate future, Resysten expects significant progress in Belgium, Germany, and Spain, where it has strong partners in such sectors as transport, healthcare, and retail.

With the U.K. regulatory system now in upheaval due to Brexit, one natural market is on hold, leaving the biggest prize, the United States, awaiting.

“It [regulatory approval] is gonna cost USD 1 million or more. But it's a massive market,” says Shajjad, “Just you have to remember, we're financing everything from our own profits.”

Resysten’s results are based on the remarkable properties of titanium dioxide (TiO2), a seemingly boring, naturally occurring compound used as a food additive. But when exposed to light, TiO2 acts as a catalyst to create chemicals that decompose and destroy cell membranes. Because most microbes are single-cell, they die very quickly once they come in contact with even tiny amounts of TiO2 and light, including even artificial light.

In 2011, Hungarian IT entrepreneur János Pintér happened on a research paper detailing this unusual property and pondered. Knowing that hospitals and medical facilities were facing a crisis from highly resistant, so-called ‘superbugs’ clinging to walls and other surfaces, he reasoned that if he could find a way to create a durable, nano-coating of TiO2 that could be applied, he could produce an affordable product that would act as a safe and efficient disinfectant over a long period.

Pinter teamed up with contacts in the chemical industry to fathom how to do precisely this and, after several years of basic research, Resysten was born.

Its success, however, is not the titanium dioxide component – this compound’s properties are now widely known within the anti-microbial coating industry – but in the solution carrying the TiO2 (a closely guarded business secret) and the careful spray application of the product.

‘We put as much emphasis on the correct application of Resysten as we do on the product itself,’ Shajjad Rizvi insists. ‘This is crucial to its effectiveness and its durability. Remember, it comes with a year-long guarantee.’ 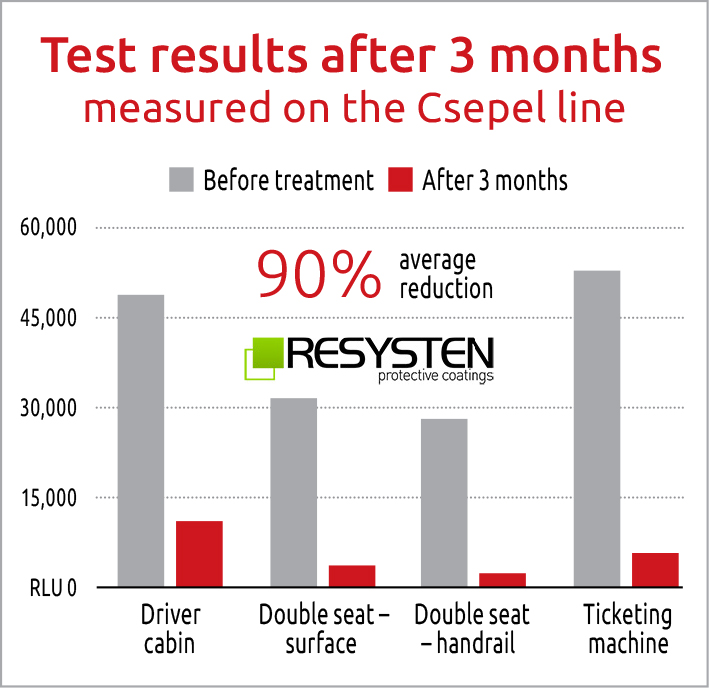 This article was first published in the Budapest Business Journal print issue of September 10, 2021.

Number of Jobseekers Under Quarter of a Million

Hungary's Most Powerful Supercomputer Handed Over

Number of Jobseekers Under Quarter of a Million