Occupational activity for the first quarter was divided between 51% for the Váci Corridor, 13% for South Buda, 13% for central Pest and 8% for what passes as the Central Business District (CBD) according to the Budapest Research Forum, or BRF, made up of CBRE, Colliers International, Cushman & Wakefield, Eston International, JLL, and Robertson Hungary.

From a development perspective, office building is being undertaken in urban locations that are more integrated into the wider city. CPI is planning New Age, a complex at a site close to Árpád híd, and has delivered the 16,000 sqm Balance Hall, part of the 35,000 sqm Balance Office Park on Váci út.

“Every location is different and a new building has to be adopted into its environment. To achieve this, open dialogue is required with the municipality, urban planners, other developers, and representatives of local inhabitants,” says Mátyás Gereben, county manager at CPI Hungary.

Another experienced developer in the Váci Corridor, Skanska, has started the development of the 26,000 sqm first phase of the 65,000 sqm H2Offices, consisting of three interconnected buildings. Codic, meanwhile, is due to complete the 20,000 sqm Green Court office, also on Váci út, at the end of the year and have Modiano, a further 13,500 sqm project planned for this ever-popular corridor.

South Buda is the other major office development of choice. “Although the number of available plots is constantly decreasing due to new developments in the main submarkets, the developers may still find available plots, even on the Váci Corridor,” argues Péter Würsching, head of office group at JLL Hungary.

“On the other hand, the lack of development land in certain areas may provide momentum for other relatively undiscovered submarkets with good public transport connections. A great example of this is the rising importance of the South Buda area where, following the development of the new [fourth] metro line and tram connection, developers have within a relatively short period started to actively search for plots and construct new office and retail schemes, making it the most vibrant office location besides Váci corridor,” Würsching adds.

On the Buda riverfront in South Buda, Wing has completed the 22,000 sqm Univerzum, the headquarters of Evosoft Hungary, part of the Siemens Group. Indeed, South Buda has essentially become the high-tech hub of Budapest.

“We believe the South Buda submarket has vast potential to further develop as it holds one of the major public transportation hubs offering quick access not only for the talent commuting from Budapest but also for the talent pool arriving from the agglomeration areas,” comments Kata Mazsaroff, leasing director at Horizon Development.

“Furthermore, the proximity to the universities easily links students with businesses, especially within the IT sector, which is one of the main drivers of the Budapest office market. The submarket continues to emerge with a nearly 200,000 sqm development pipeline under construction with a vacancy rate currently at 8.6%,” she points out.

“Occupiers will seek office buildings in locations that can provide a healthy, good air quality environment with an immediate connection to outdoor spaces. South Buda offers well-connected, easily accessible plots in a green environment that have excellent development potential when we reimagine the future of workplaces,” Mazsaroff adds.

Another south Buda waterside development is BudaPart by Property Market on a 54-hectare site at Kopaszi Gát (Kopasz Dam). The project will include office, retail and residential aspects in addition to large green and park areas, all based on the concept of a new city quarter.

Slightly set back from the river, but still in South Buda, Atenor has received the final building permit for BakerStreet, the 17,000 sqm first phase of which is due to be handed over in 2023. The company has also signed an agreement for the purchase of an 8,000 sqm adjacent plot, on which the 24,500 sqm Phase II will be developed.

“Both buildings of BakerStreet are developed to meet the requirements of BREEAM ‘Excellent’ green certification. In addition to [greater] environmental awareness, all these amenities will improve the quality of life for employees and residents in the area,” says Atenor of the development.

With plots becoming increasingly scarce, the outer southern boulevard of Budapest has developed into another hub. Wing is due to completing the speculative, 42,000 sqm Liberty office complex in District IX in 2022, while Atenor is developing the phased 85,000 sqm Arena Business Campus.

“There are some submarkets which capacity is getting to its end, for example, the CBD, or Central Buda, or the Váci Corridor. Therefore, opening other locations is crucial. Many submarkets still have huge development potential, for example, Central Pest, Non-Central Pest, South Buda, and also North Buda. These places will be in the focus of more developers in the future,” says Nikolett Püschl, leasing and development director at Atenor Hungary.

At the western edge of the city in District XI, Futureal is developing the 68,000 sqm Budapest ONE Business Park on a brownfield site at a transport hub at Etele tér adjacent to the Kelenföld railway station and the Metro 4 station. The complex is seen as a new city quarter by the developers.

“Accessibility is still one of the main questions raised by prospective tenants when searching for a new office location. The well-known mantra of location, location, location is still prevailing so the availability of good public transport connection is still the focal point both for tenants and developers,” Würsching says.

This article was first published in the Budapest Business Journal print issue of  May 7, 2021. 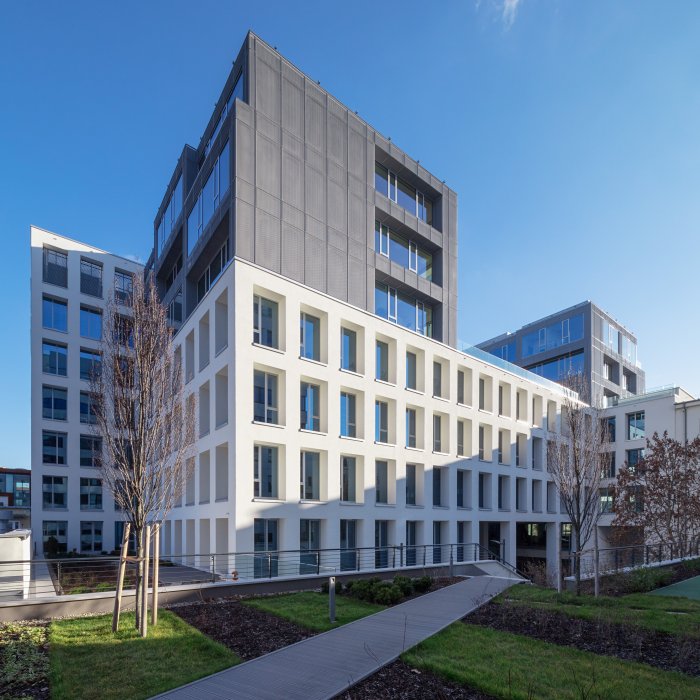