Edith Heard, Director General of the European Molecular Biology Laboratory, addresses a ceremony marking the move of HCEMM to the Szeged Science Park Incubator House on Jan. 11, 2022, in Szeged.

Science Park Szeged has been selected as the home of the Hungarian Center of Excellence in Molecular Medicine (HCEMM), which will move to a newly inaugurated Incubator House on the park’s premises. The occasion opens a whole new dimension for Hungarian scientists to get engaged in international research and help the biotech service industry thrive in Hungary.

The brain drain is still an issue in Hungary when it comes to losing scientific talent to more prosperous countries. Research spending here is two and half times less than that in Austria, to give but one relevant indicator.

However, the past decade has showed many encouraging signs that things could be changing for the better. In 2021, R&D funds reached 1.6% of gross domestic product, amounting to some HUF 800 billion, including government subsidies of HUF 251 bln. The plan is to push that GDP ratio up to 3%. Likewise, the number of researchers has risen from 31,000 in 2010 to 60,000 last year, most of whom work in one or other of the 14 science parks established across the country.

HCEMM has found a new home in a renovated Incubator House of one of those hubs in Szeged, a city 175 km southeast of Budapest, relatively close to the Serbian border. One of the co-founders of the center is the European Molecular Biological Laboratory (EMBL), Europe’s leading life sciences lab, whose tender allowed HCEMM to make the move. Hungary has been a member of the EMBL network since 2017, and Hungarian researchers have been able to enjoy its benefits ever since by participating in pan-European project work.

“EMBL and Hungary are both committed to building on the strong foundation that already exists, and to tackling the kind of global threats that require collaborative efforts across borders,” EMBL director professor Edith Heard said, as reported by the organization’s official website.

“We’re delighted to participate in the opening of this valuable facility that will host excellent talent and services, and look forward to seeing the impact that it will have on Hungary’s expertise in the life sciences, as well as contributing to life science research across Europe more broadly,” she added.

As her comments suggest, the inauguration marks the start of new opportunities for researchers in Hungary, as well as future collaborations with EMBL. The increased opportunities to share expertise and engage in scientific dialogue come at an exciting time, in particular because of the launch of the new EMBL “Molecules to Ecosystems” program which runs from 2022-2026. 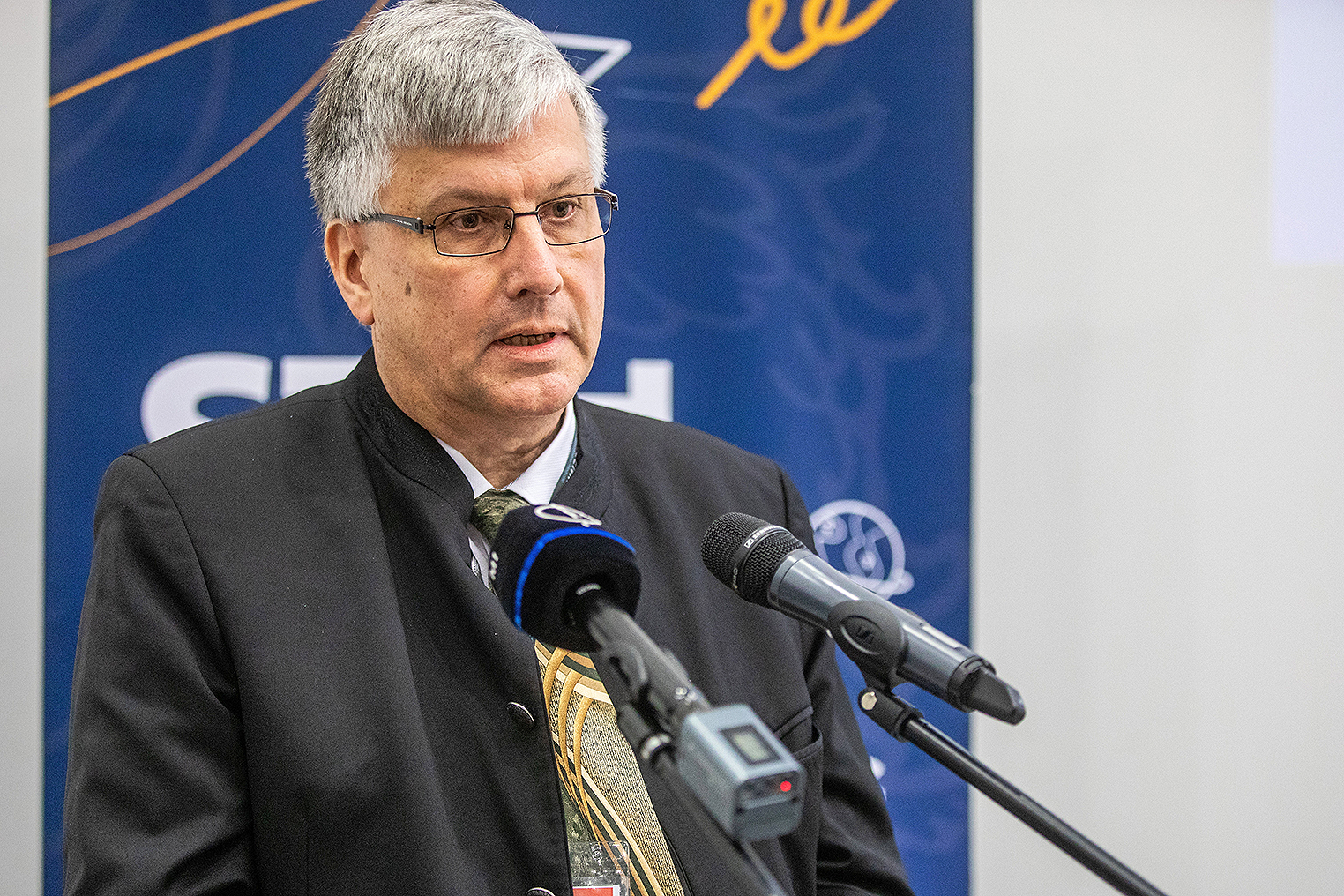 Christoph Sensen, director-general of the Hungarian Center for Excellence in Molecular Medicine, gives a speech at the Incubator House opening ceremony on Jan. 11, 2022.

At the official ceremony marking the move, a memorandum of understanding was signed by Hungary’s Ministry of Innovation and Technology and EMBL, which aims to intensify the already strong links between EMBL and life science researchers in Hungarian universities, research institutes, and the innovation sector.

As Heard explained, the timing could hardly be better since on Jan. 1 the new five-year scientific program started, and has been endorsed and supported by Hungary as an EMBL member state. The program also sets an ambitious goal to kick-start a new era of life sciences in Europe where the whole picture can be puzzled together from molecules to entire ecosystems.

It is seen as the first pan-European strategy for molecular research for human and environmental health. The idea is to provide the continent with a toolkit to tackle major societal challenges from climate change and biodiversity loss to emerging infectious diseases and cancer. The program also integrates life science research in the member states and helps their green social-economic development.

“No single country or discipline can handle alone the scientific challenges that we are going to deal with, nor certain major social issues. By design, this program aims for EMBL to engage with its member states like never before in the upcoming five years,” Heard said at the ceremony.

HCEMM was founded by the Biological Research Center of the Hungarian Academy of Sciences, the University of Szeged, and Semmelweis University. It received funding from the European Union’s Horizon 2020 research and innovation program. In 2020, HCEMM received an elevated status as one of the 18 Hungarian National Laboratories, at what was initially a project was transformed into a much more sophisticated program. At the end of last year, HCEMM also was designated as a Hungarian Excellent Research Infrastructure.

“HCEMM summarizes the best skills and strengths of Hungarian researchers. The new base in Szeged will help HCEMM to become a regional scientific center for cutting edge molecular medicine, training, and employing highly qualified researchers,” Minister for Innovation and Technology László Palkovics said.

The center’s CEO and director general, Dr. Christoph Sensen, said “HCEMMs mandate is to perform research and development on topics related to healthy ageing with our four research pillars, which include cancers, metabolic diseases, cardiovascular diseases, and infectious diseases. We are aiming at the development of new diagnostic methods and treatment options which improve the quality of life and the life expectancy of the patients and also contribute to lowering the health care costs at the same time. In the next few days, we will also begin to equip the laboratories and offices," HCEMM’s, as quoted in University of Szeged’s report.

This article was first published in the Budapest Business Journal print issue of January 28, 2022.

Richter Signs Term Sheet With Mithra for Sales of Donesta