Having originally started as a weaving factory, Suzuki is now a global leader in automotive, marine engine, and motorcycle manufacturing, and a conscious, innovative company. Organized to guidelines set by the parent company, the research and development programs of the Esztergom factory of Magyar Suzuki have become increasingly important since 2009.

Magyar Suzuki has a conscious approach to R&D, and the processes are embedded within the organization. The parent company determines the main direction, but Magyar Suzuki cooperates with suppliers, research institutes, and universities at the operative level. The development of products and the drivers of innovation are always framed by consumer needs, industry challenges, and the regulatory environment.

Compliance with environmental regulations is a critical goal in model and production technology development and feedback-based development projects. In December 2019, in line with the EU’s emission level regulations, the Esztergom factory began the mass production of hybrid variants of the Vitara and the SX4 S-CROSS models for European markets. In 2020, 65% of production already used hybrid technology.

“It is a challenge to our company to offer our hybrid cars at consumer prices (and manufacture them at production costs) that will allow an increasing range of consumers to buy new cars. We are, therefore, constantly working on reducing our operating costs. Digitalization and the switch to smart production could prove to be a partial solution to this challenge,” says Zsuzsanna Bonnár-Csonka, head of corporate communications.

In addition to the cost aspects, the introduction of hybrid auto manufacture was also a challenge in terms of production, as new technologies had to be introduced that had not previously been utilized at the Esztergom factory. The company forecasts that hybrid models will still be in demand for the next 10 years on the market, yet the future is electrification, and the Japanese parent company’s plans involve a larger selection of fully electric models in the product range from 2030 onwards.

Suzuki Group is dedicated to a greener future, and would like to achieve carbon neutrality by 2050 in all factory units, and for all products manufactured by the company globally. Magyar Suzuki’s development projects are primarily self-funded, but also use state and EU level subsidies whenever possible.

A five-year R&D&I project led by Magyar Suzuki Corporation, implemented in a consortium including the Esztergom factory, Bay Zoltán Nonprofit Ltd. for Applied Research, PEMÜ Plc., and Pázmány Péter Catholic University, is nearing its end. It involves the improvement of production and logistics capacities at the Esztergom company, as well as developing a state-of-the-art prototype complying with environmental standards, with the help of an innovative R&D supplier network established as part of the project. The project was implemented with a non-refundable GINOP grant of HUF 2.584 billion under the Széchenyi 2020 program.

“In addition to delivering the prototype, Magyar Suzuki also focused on the manufacture and testing of hundreds of custom-developed parts. We delivered a state-of-the-art, competitive prototype with a small size, low consumption and environmental footprint, minimal maintenance and servicing needs, offering a wide range of convenience and other features and built from 95% recyclable materials,” says said Deputy CEO Dr. László Urbán.

“The program also covered hundreds of welding robots used in production, which were networked to optimize the welding spot sequence. Thanks to the research results, we’ve been able to introduce laser welding technology, and improve the composition of cost-saving polymers used in the production of components. The digitalization of internal material supply processes also allowed us
to improve logistics processes within the factory,” Urbán explains.

As part of the project, Magyar Suzuki also submitted a patent application to the Hungarian Intellectual Property Office to be granted design protection on an invention by one of the company’s engineers. This is the first independent patent registered by Magyar Suzuki. 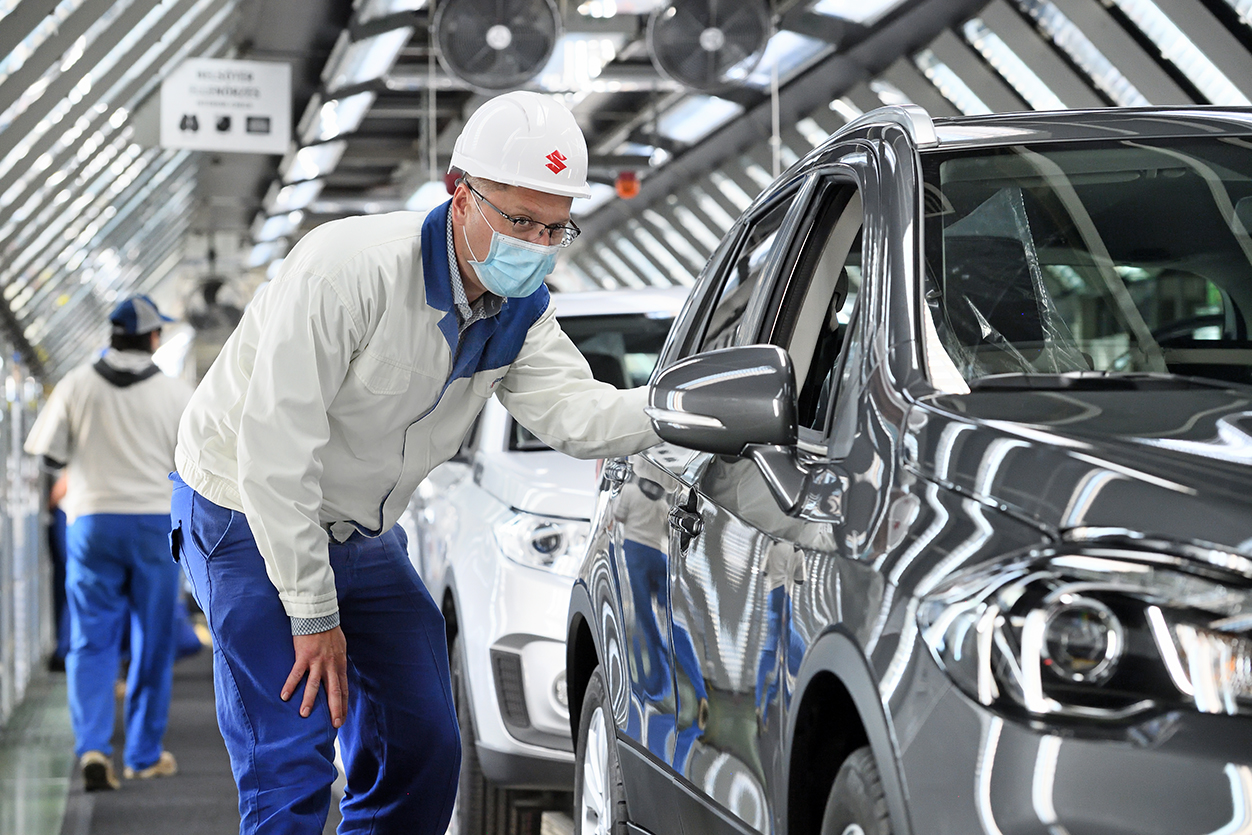 The company is already dedicated to digitalization and modernization of the factory and sees great potential in automation. Thanks to the GINOP subsidy, the company has taken a significant step towards the “smart factory, smart manufacturing” concept. The Esztergom factory now has 770 robots supporting sustainable, reliable, and safe production, covering the entire production process. The company also uses collaborative robots in some areas, which allows for a smooth cooperation between machine and man.

Magyar Suzuki believes that a generational change and technological transformation is taking place in the automotive industry, and as a result, the emphasis is shifting from the quantity to the quality of the labor force, and there is a growing need for more qualified skilled workers. There is a special focus on training and development, both inside and outside the company. As part of this effort, a Suzuki-specific innovation education course has been developed for engineers this year to identify the possibilities for innovation in their development tasks.

Ideas and suggestions, mainly in manufacturing technology and factory development, have come from engineers. Last year, 30 out of the 120 projects examined had an apparent R&D element in them, and Magyar Suzuki selected six of these projects to submit to the Hungarian Intellectual Property Office for qualification.

From the establishment of Magyar Suzuki Corporation 30 years ago until 2020, Suzuki Motor Corporation has invested a total of HUF 538 bln (EUR 1.9 bln at then-current exchange rates) in Hungary, while the amount invested in 2020 alone was EUR 38.1 million.

Sixt opens new technical base next to the airport