With the rate of urbanization growing, private vehicle ownership rising, and mobility needs and habits evolving in complexity, Budapest and its residents need a breather from traffic congestion. Carsharing may be a viable solution. The Budapest Business Journal discusses the benefits of carsharing, which is adding electric vehicles to the mixture.

Urban mobility is complicated and variable; so are the needs of city dwellers. On any given day, urban residents may need to jump between different transportation modes. They may arrive to work on foot in the morning, take the underground for a nearby meeting in the afternoon, and need to drive to an evening event. Carsharing companies aim to fit into such busy schedules, eliminating the inconvenience of owning a car, finding a parking place only so it will remain stationary for 96% of its lifetime. Almost everyone needs a car at some point, but not at all times or at all costs

“It is irresponsible to buy a car and maintain it if it spends most of its time unused. The occupancy of one’s own car is on average around 3-4%, while in the remaining 96%, the car is unused. In contrast, a community car can substitute up to 5-10 privately-owned cars in traffic,” Boglárka Ádám, the Chief Executive Officer of GreenGo, tells the Budapest Business Journal.

“Not only is car sharing important in making urban transport more liveable, but also the fact that Budapest residents use the various forms of transport available flexibly from carsharing to BKK [the operator of the capital’s public transport] to cycling instead of owning a car. It is friendlier on their own wallets as well,” Ádám adds.

GreenGo, which has been in the market for five years and has 320 autos, is not the only carsharing service in Budapest, but it is the only one to operate an entirely electric fleet.

Car sharing aims to alleviate the traffic burden of a big city. The same set of vehicles run the roads with different riders. Essentially, the wheels keep spinning while people mind their non-vehicle-related business. It also aims to reduce gas emissions, which is amplified in the case of electric vehicles, solving environmental and infrastructure issues simultaneously.

Nevertheless, when it comes to spreading the service, there are challenges if EVs are to take center stage. Firstly, the charging infrastructure, and secondly, whether the chargers are publicly available or privately operated.

“In the larger cities in Hungary, especially in Budapest, there is a continuously increasing network of charging stations which enables the convenient use of electric cars across the city,” Bence Buday, CEO of Share Now Magyarország, tells the BBJ.

“However, once the user wants to leave downtown and take a longer countrywide trip with an electric vehicle, extensive preliminary scheduling and redundancy planning is required as currently in Hungary, the countrywide charging station footprint still has significant blind spots, and the service availability of those also has issues from time-to-time,” he admits.

Accessibility to the charging infrastructure in Hungary is another crucial aspect for the private EV user. While multiple providers offer charging services through their networks, the majority of charging stations are privately operated at offices, shopping malls, and industrial parks; they are not, therefore, available to the private user.

“Overall, with frequent heavy use of electric cars (i.e., carsharing), we are far from the stage when an operator or service provider could rely on the publicly available charging networks. This is the reason why each carsharing company in Budapest, including Share Now, has its own (privately managed) charging stations across the city,” Buday adds.

He believes that this inadequate charging infrastructure is a significant barrier to the widespread use of EVs. Hence, the company is mindful of the proportion of electric vehicles it adds to its 390-strong fleet. That said, Share Now’s charging infrastructure has recently improved considerably through adding four fast chargers and one supercharger via a cooperation with Alte-Go, the e-mobility department of alternative energy company Alteo Group. 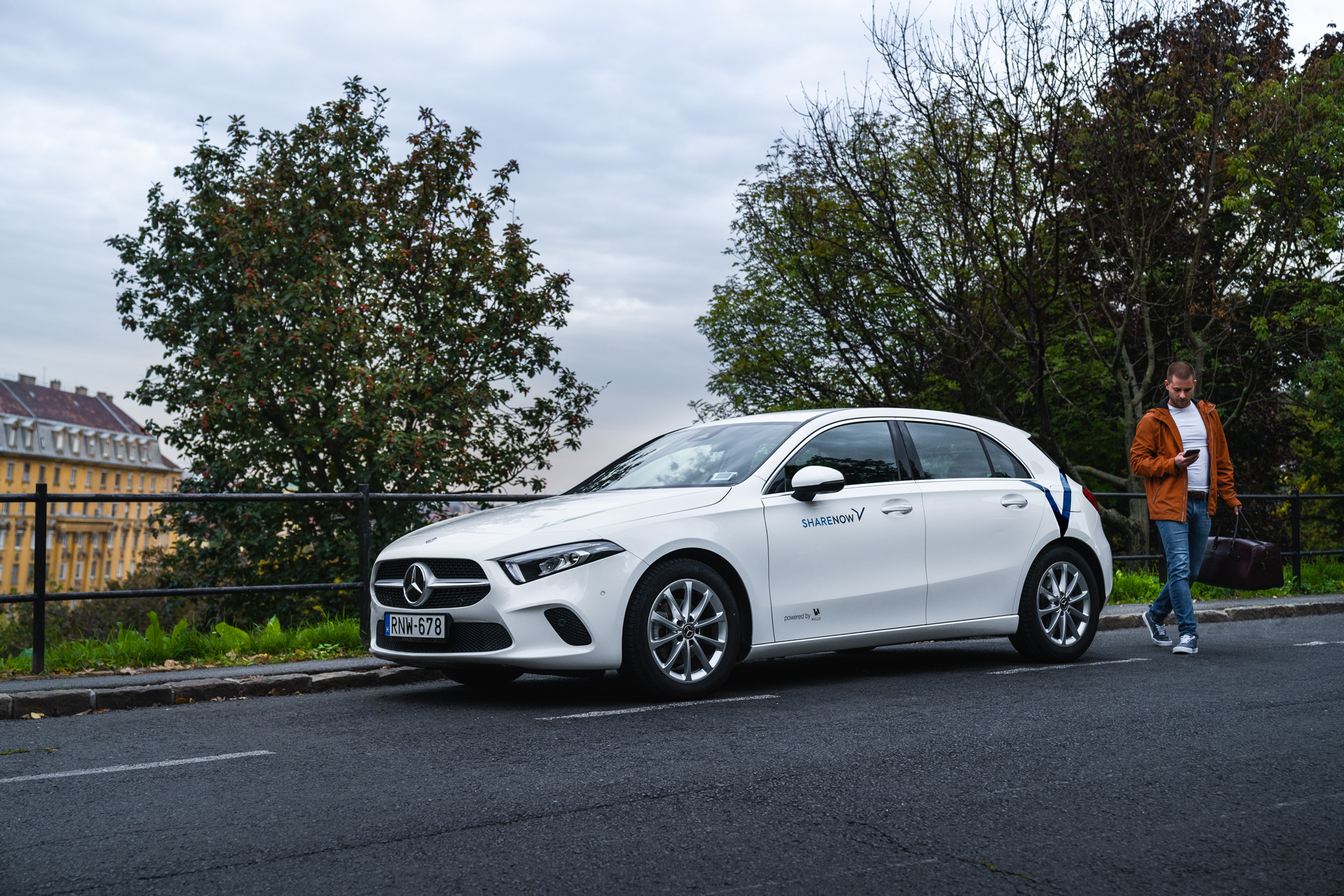 GreenGo is also adopting a mindful approach in its step-by-step expansion while adding an important mission to its mix: To make electric driving and carsharing a real alternative in the minds of the capital’s commuters. In that goal, there is room for growth.

“There’s need for the regulatory environment to move from scratch and for a government decree to develop detailed rules for community carsharing under the authority of the Passenger Transport Act and to start talking about sectoral rights such as securing the use of the bus lane for carsharing, thus for e-carsharing cars,” Ádám says. She adds that having dedicated carsharing parking spaces in the city center would help users plan better.

Share Now’s Buday agrees on this point. “The next development stage could be the development of carsharing parking and service stations across Budapest. These could be well-defined areas next to the most important transportation hubs where carsharing cars could be parked and be constantly available for users. With such carsharing ‘islands,’ people could easily switch between transportation modes. Such ‘islands’ could also be well-equipped with the necessary charging infrastructure in the right number so that constant charging service availability would not be a problem anymore,” Buday says.

While that might be an attractive sounding tomorrow, GreenGo’s Ádám is not so optimistic today. “Unfortunately, current trends are going against this, with district parking systems just trying to crowd out carsharing companies: forcing community cars to be crowded out of parking spaces for downtown residents would not only be unfair but would also hinder environmentally friendly urban mobility,” she says.

Buday agrees that this is a longer-term project. “Looking at the current situation and the recent growth rate of the charging station footprint within Budapest and across Hungary, it will definitely take a few more years until the convenience, accessibility, and reliability of EV charging can reach similar levels as to ICE [internal combustion engine] car usage,” he admits.

Electric or not, carsharing would seem to make sense. The benefits are ample. For micro-journeys, riding in a shared car will help drivers save on their expenses, and cut the city some environmental and traffic slack, so long it is supported by a convenient infrastructure and varied mobility options.

This article was first published in the Budapest Business Journal print issue of November 19, 2021.

Mercedes-Benz to invest HUF 400 bln at plant in Hungary