Winter Warming Reds From the Top 100

As we move into winter, big red wines are just the ticket for warming winter cockles, and there are plenty of sophisticated ruby-colored Hungarian wines to smooth the seasonal transition.

Hungary makes roughly one-third red wine, compared to around two-thirds white wine (with a few percent of sweet and rosé also in the mix).

Unlike the rich selection of indigenous white varietals to choose from, beyond the exciting Kadarka and Kékfrankos (for coverage of those grapes see the October 30-November 12 issue of the Budapest Business Journal), most of the reds, certainly on the fuller-bodied side, are international varietals that originally hail from France.

November is usually the month of the big red wine-related events, although Villány’s “Franc and Franc” and Winelovers’ “Bordói November”, held in Budapest, both became COVID casualties this year.

Even though there’s still more of its internationally dominant sibling, Cabernet Sauvignon, planted in Villány, Cabernet Franc has become that area’s calling card, and wine made from the grape has carried the Villányi Franc moniker since 2014.

The legendary Michael Broadbent, a Master of Wine and the long-time fine wine auctioneer for Christie’s, who passed away in March at the age of 92, proclaimed on visiting Villány in 2000 that Cabernet Franc had found its natural home there.

The top red wine in the annual Winelovers 100 legjobb Magyar Bor (100 best Hungarian wines) for 2020, which takes Hungarian wines that have won prizes in leading foreign and domestic wine competitions and then pits them against each other, was Tamás Günzer’s intense Bocor Villányi Franc 2017 (HUF 4,915 from Bareszkozok.hu), which claimed 16th position overall, oozing a gorgeous mix of tobacco, smoky, toasty and black/red fruit notes.

The upcoming Bognár Pincészet’s 2018 Villányi Franc 2018 took 20th spot, while 19th was Csanád Cuvée 2015 (HUF 8,790 from Pannonborbolt.hu), made by the Hungarian Wine Academy’s reigning Winemaker of the Year, Csaba Koch, from his Villány cellar VinArt.

This is a Cabernet Franc-based blend, with 50% of it composed from Franc, and 25% each of Merlot and Cabernet Sauvignon. Incidentally, positions 1-15 of the top 100 were taken up by botrytized Tokaj sweet wines.

While Merlot is so often the bridesmaid but seldom the bride in Bordeaux blends (albeit with exceptions like Bordeaux’s Right Bank, where it dominates), Cabernet Sauvignon is usually the kingpin, but can struggle to ripen properly, even in a relatively warm wine region like Villány.

Also, in Bordeaux, any rough edges of imperfect ripeness are smoothed out by a fleshy and energetic supporting cast that includes Merlot, Cabernet Franc and Petit Verdot. (For an exciting Bordeaux-style blend that also includes some Petit Verdot, ultra-rare in Hungary but making a comeback in Bordeaux, check out Késa Birtok’s Pegasus 2017, from Balatonboglár, on Lake Balaton’s southern side, which costs HUF 8,150 from abovowine.com.)

Cabernet Franc ripens a week earlier than Cabernet Sauvignon with no green flavors, according to Attila Gere, one of Villány’s pioneer vintners. Nevertheless, he still manages to put out solid Sauvignons when the weather is warm enough.

Villány’s Ördögárok vineyard, with its great exposure that allows the grapes to ripen nicely, is also cooled down by breezes, which help preserve acidity to prevent the wines becoming cooked and jammy and keep the air circulating to prevent certain diseases taking hold.

It is from here that the Cabernet Sauvignon that provides the backbone to Sauska Villányi Cuvée 7 2017 (HUF 8,750 from Bortársaság) hails, supplemented by Merlot and Cabernet Franc from the Konkoly and Kopár vineyards.

It is always a joy to contrast this wine with its partner in big red wine crime, Sauska Cuvée 7 Siklós 2017, which comes from the formerly white wine half of what was earlier called the Villány-Siklós region.

These two wines represent Villány’s very own version of Left Bank vs Right Bank Bordeaux. In Siklós, the calcium-rich soils yield wine of higher acidity and really suit Merlot, which takes the leading role in this blend, with its zesty fruit and freshness coming through delightfully, alongside complex herbal and floral notes.

This wine is the same price as its partner. The 2016 version was placed 86th in the Winelovers Top 100. Both wines were aged in small, first- and second-fill French barrels for 15 months.

The often-underrated Merlot also showed very well as a single varietal in the Top 100 ranking, with the Szekszárd pair of Schieber Pincészet’s Tabu Merlot 2017 (HUF 15,000 from the cellar) and Fekete Borpince’s Merlot Válogatás 2018, claiming 44th and 53rd respectively.

From the nearby region of Tolna, Tűzkő Merlot Válogatás 2013 was 78th and has aged beautifully and is a real bargain at HUF 3,790 from Pannonborbolt.hu.

Meanwhile, top-notch Cabernet Franc is certainly not exclusive to Villány as numerous examples in the Winelovers ranking shows, such as Csóbor Pincészet’s Agárdi Cabernet Franc 2017 (a give-away at HUF 1,950 from velenceiborokboltja.hu), from next to Lake Velence in the Etyek-Buda wine region, which came in at #41.

It is perhaps unfair to write off Cabernet Sauvignon in Hungarian vineyards, as in warm years, when it does ripen properly, the results can be spectacular, even a bit further north of Villány, in the region of Szekszárd.

Tivald Szekszárdi Cabernet Sauvignon 2017 (HUF 8,900 from wineloverswebshop.hu and Selection.hu) from Eszterbauer Borászat (#71 in the Winelovers’ 100 ranking), which this year completed the building of a stunningly designed, state-of-the-art new winery, and the Cabernet Sauvignon 2017 by Mikóczi Pincészet, a quite unknown cellar with just four hectares to its name, both proved the point nicely.

Cabernet Sauvignon would, nevertheless, be a real challenge to ripen in the cooler climes of the Pannonhalma wine region, which is mostly associated with vibrant and aromatic white wines, so it comes as no surprise that Pannonhalmi’s Bordeaux-style blend Infusio is made from Merlot (70%) and Cabernet Franc (30%).

This limited-release wine sells out quickly each year, and the 2018 has now hit the shelves. It comes from the locally warm Babszökő vineyard. Concentrated, yet fresh as ever, this year it is more focused than fleshy; it is still very young for a big red but all the component parts are there in good measure. It costs HUF 8,950 from Bortársaság. The previous vintage was placed #69. 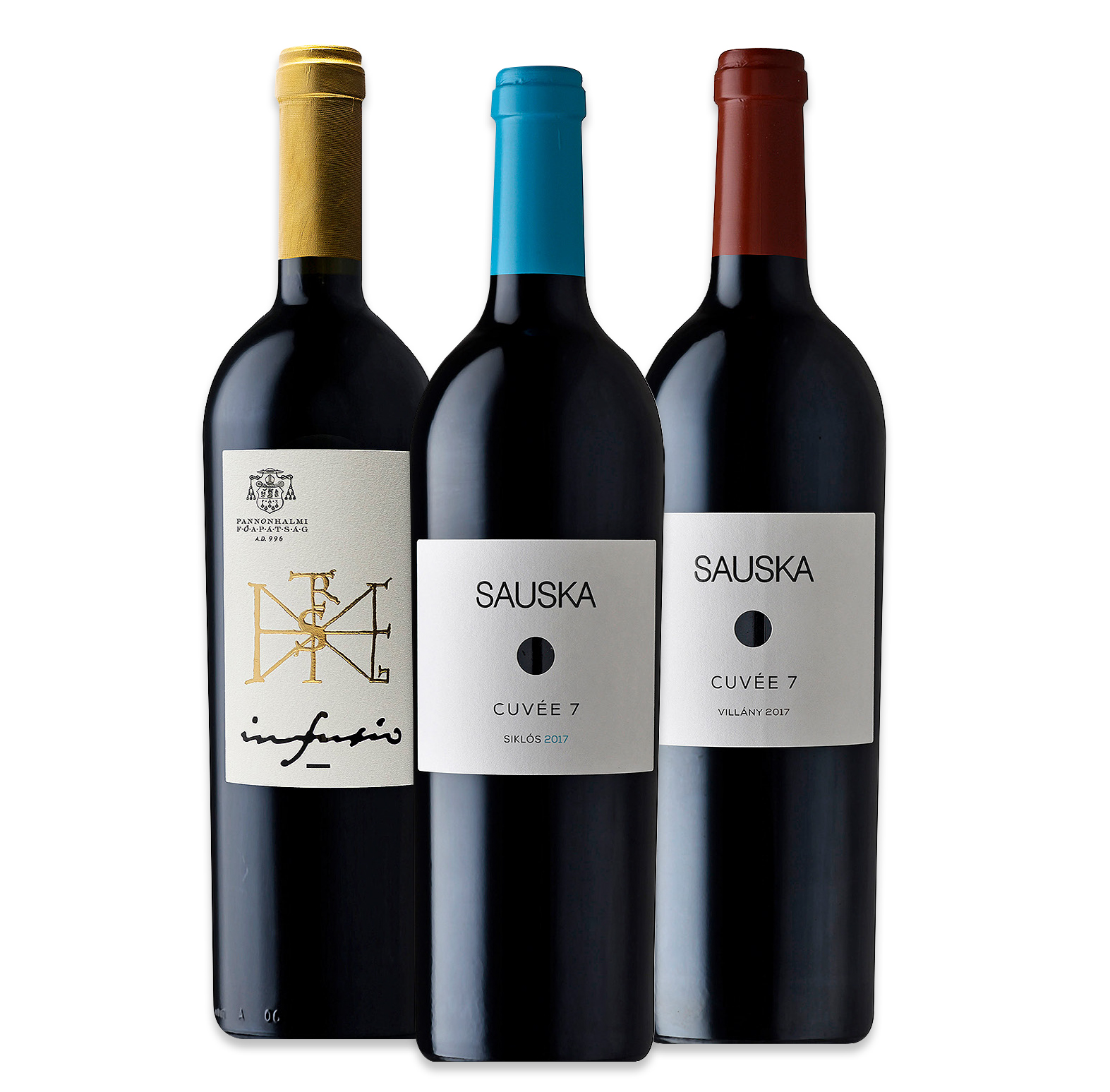