Time for Wine Palates to go Back to School

The Volcanic Wine Festival (Vulkanikus Borok Fesztiválja), which takes place in the winemaking village of Gyöngyöspata in the Mátra wine region of Hungary’s northeast, has become a much-treasured back-to-school event for wine lovers.

Held for the sixth time this year, this chilled celebration among the cellar rows features wines from Gyöngyöspata’s grower-producers and others from Mátra and guests from other Hungarian volcanic regions, of which there are a fair number. It has been so popular that it was expanded this year from a one-day event to a three-day festival, held from August 26-28.

Mátra is a tremendously exciting region now that many smaller players have found their winemaking feet. They have progressively poured into the region following the break-up of Nagyréde. This formerly state-owned operation made vast quantities of wine in what is Hungary’s second-largest wine region in terms of land under vine.

Back in the day, Nagyréde’s mass-produced wines were exported far and wide, even to a café/wine bar in my hometown, and the quality was surprisingly good. Now, some outstanding red and white wines are being made here.

A masterclass called “The New Mátra,” presented by Dániel Kezdi (the organizer of Furmint February) and moderated by Wine Flow’s Richárd Németh, introduced an exciting range of wines from new wave producers. The region doesn’t quite have a signature grape variety, at least when it comes to white, although Kékfrankos is perhaps the red wine flagship.

First up was a dry Furmint from the 2021 vintage by Szignárovits-Maka Pince, by promising young winemaker Márk Szignárovits. It has varietally pure aromas and flavors of green apples and pear, with lively and refreshing acidity, although the alcohol of 14.5% does make the finish a little rustic. Nevertheless, this is very decent for a wine made in a plastic tank.

From Centurio Borház came Fáy-Domb Sárgamuskotály 2021, which is made from a grape more widely associated with Tokaj, although it is actually a French variety: Muscat Blanc à Petits Grains, or Muscat Lunel. Nevertheless, it appears to feel at home in Mátra, where it captures the kind of bright acidity and zesty fruitiness also found in Tokaj, which sets it apart from the often flabbier and flat wines made from the variety in many other parts of the world. This is always a delicious wine (grapey, fresh, floral and fruity, especially peach) from Centurio’s Balázs Ludányi, costing HUF 4,490 from www.artizanshop.hu. 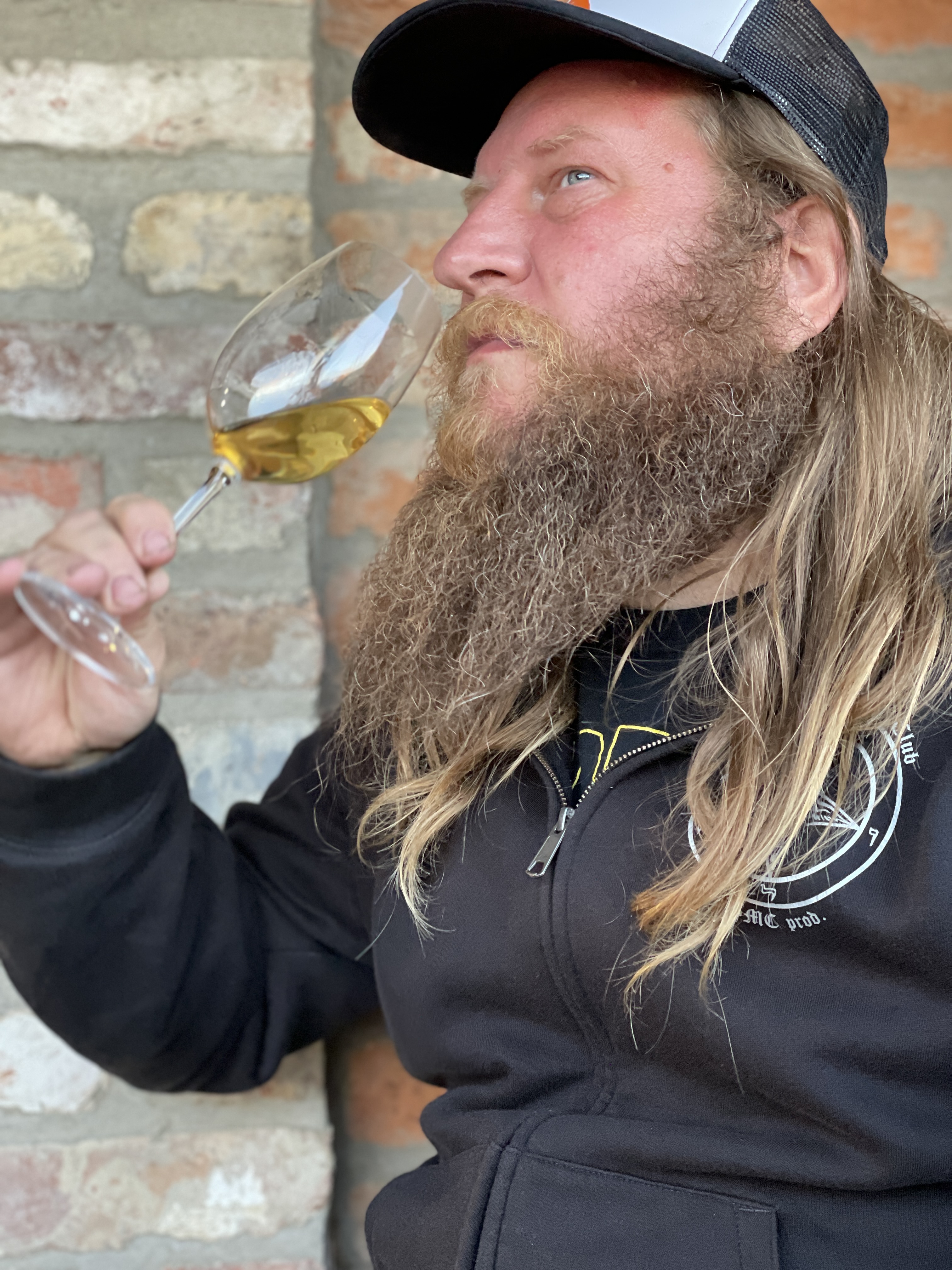 Riesling (Rajnai rizling in Hungarian) was the first wine made by Bálint Losonci from vines that he planted. Once a young gun, he has become an established winemaker who is always keen to introduce the newbies.

His winemaking has become increasingly sophisticated, as well as heading in an ever more natural direction. Losonci Riesling 2019 has the variety’s prized petrol note, along with green apple but also some bruised apple. This latter shows the minimal use of sulfur favored by Losonci and natural winemakers in general.

Losonci told me Mátra is a particularly attractive area to make wine due to its mix of volcanic and limestone soils, highly prized in the wine world; here, they often appear mixed together in the same vineyard.

(Incidentally, the neighboring region of Eger also has volcanic and limestone soils, and it is interesting to try a pair of the St. Andrea Winery’s white wines, the vibrantly citrusy Boldogságos 2021 from that vineyard’s volcanic rhyolite tuff, and the spicier St. Andrea Örökké 2021 from limestone. They cost HUF 3,950 and HUF 4,950 from Bortársaság, respectively.)

Losonci has recently added a wine made from Purcsin to his range. This is a black grape variety common in Hungary in the 19th century pre-Phylloxera era that almost died out until artisanal winery Basilicus’ winemaker András Kanczler planted 1,200 Purcsin vines in Tarcal’s Mestervölgy vineyard in 2013 and made the first red wine from these in 2017 in the Tokaj region.

Levente Major is another of the natural wine pioneers in Mátra. His Cibike Olaszrizling 2017 is not just natural but also an extremely fine wine: full-bodied, oozing Williams pear with a waxy texture. It costs HUF 6,300 from borarum.hu.

Itt és Most’s soon-to-be-available Tihanyi kék 2021 is made from another of the pre-Phylloxera comeback varieties; it has a pale Pinot Noir-like color, fine-grained tannins, and pronounced pepperiness like a Syrah. Wine blogger turned winemaker Zoltán Németi’s Octopus 2019 puts him among the region’s best with this grape. Kékhegy Pince’s Zweigelt 2018 (HUF 3,556 from matraiborokhaza.hu), with its ripe black cherry, spicy, peppery notes, was another exciting wine from a newish winery.

Meanwhile, the Mátra new wave continues to grow. Among them, Miki Bata, the owner-winemaker at Bata-Loyal Estate, was yet to start harvesting but noted that picking had started for others on August 22, around two weeks earlier than usual, when I spoke to him on September 5. Bata-Loyal Estate has 20 hectares of vine, four of which are currently yielding.

“The quality is very good. It’s a case of so far, so good; the PH, acidity and sugar levels are good. We were expecting a sugar spike, but it hasn’t materialized,” said Bata. (By an odd coincidence, I had interviewed him many years for this paper, when he was working in IT security.) Like in many other regions of Hungary, the expected quantity of grapes and wine is lower this year than usual due to the extremely hot and dry summer, leading to smaller berries forming and hence less juice in the grapes.

“One interesting aspect is that the skin-to-juice ratio is higher than usual due to the smaller size of the berries, which is likely to bring about a different character in the wines,” said Bata. He added that flowering occurred without problems in the spring and that the rain in late August came at a good time.

“We had no issue with disease; in fact, I haven’t sprayed my Zöldveltelini [Grüner Veltliner] in three years,” he mentioned. He is in the process of applying for organic status for his wines. He noted that Gyöngyöspata is packed with organic growers. It’s a kind of knock-on effect; it’s much easier to be organic when your neighbors are also.

The Budapest Wine Festival will be in full swing (September 8-11) when this issue comes out, held in its usual stunning setting of the courtyards of Buda Castle. More on that later.

This article was first published in the Budapest Business Journal print issue of September 9, 2022.