Hashing out the Neszmély Wine Brand

A new wine brand, #Neszmély, was recently born as a quintet of winemakers from the Transdanubian region premiered their first bottlings of this mutual wine, although the vintners make their own individual versions.

Compared to other such mutual or common wines, such as Pannonhalma’s PH-Érték, Balatonbor, Villány REDY, or Bükk’s Balvány, producers have a much freer hand regarding composition.

While Balatonbor is made from Olaszrizling, PH-Érték wines are based on a backbone of at least 50% Riesling, and Balvány wines must all use the same combination of grapes (one-third each of Chardonnay, Olaszrizling, and Zenit), the bulk of #Neszmély can be made up of any of six grape varieties.

Up to 85% of the blend should come from Királyleányka, Olaszrizling, Rajnai rizling (Riesling), Rizlingszilváni (Müller-Thurgau), Chardonnay and Szürkebarát (Pinot Gris). The blend must comprise a minimum of two varieties, with no one type exceeding 50%. Up to 15% can come from the aromatic varieties of Irsai Olivér, Cserszegi fűszeres and Sárgamuskotály, which serve to ramp up the aroma attack.

#Neszmély can only be fermented and aged in stainless steel tanks. The grapes are vinified separately and later blended. The aim is not to make a very top wine, but rather one that captures the essence of Neszmély, a region that is 100 kilometers long and has 1,000 hectares of land under vine

That essence is underpinned by freshness and zesty fruitiness, according to Szabolcs Emmer, president of Neszmélyi BORvidékÉRT and part-owner and founder of Kősziklás.

“The individual characteristics of the grape varieties should not dominate the blend,” he said. The recommended price for all of the wines is HUF 1,890. Almost 20,000 bottles have been made of #Neszmély in its debut vintage, which, for the time being, are available through the winemakers’ individual sales channels, adds Emmer. When not presiding over Neszmélyi BORvidékÉRT, he spends most of his time in the vineyards as Kősziklás’ viticulturalist. 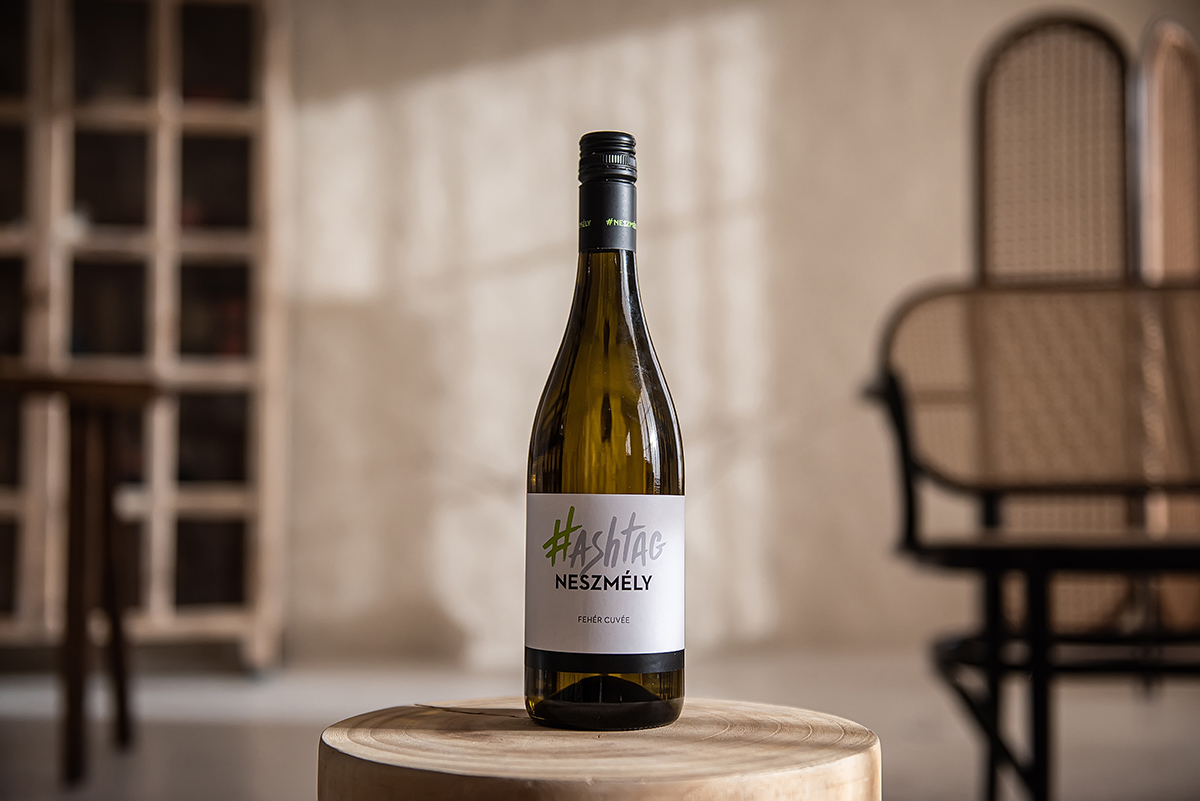 A Bit of Body

“This bottle of wine is Neszmély. Inside the bottle are the long-stretching northern region’s characteristics, the hills and valleys of Neszmély, the deep and warm loess soil, the cool climate, and the unending, serpentine River Danube,” said Hilltop Neszmély winemaker and part-owner Ákos Kamocsay, speaking at the launch.

“It should have a bit of body, as well as the ubiquitous freshness, the crispy acidity, the rich, complex and full aromas and flavors, and outstanding harmony of Neszmély.”

It is not permitted to blend across vintages, and the must has to be clarified. The alcohol level must be between 12.5% and 13.5%, and it has to have minimum acidity of 5.8 grams per liter, with no upper limit. Other wineries are free to join and release #Neszmély, although the wines will need to gain approval from a tasting panel.

István Turay of the exciting, eponymous bijou family cellar attended the #Neszmély launch. When I asked him if he was considering making a #Neszmély wine, he told me, no, having just two hectares of grapes at his disposal.

Although made of quite different compositions of grape varieties, the wines do indeed have much in common and pretty much nail Kamocsay’s description.

Half of Kősziklás’ #Neszmély is made from the Királyléanyka grape, which Emmer and the other owner Ákos Béger, who is also the winemaker, rate very highly. They describe Királyléanka as “the Sauvignon Blanc of the Carpathian Basin.”

Emmer told me it captures the vibrant aromas and tingling acidity that characterize this cooler, northern wine region with its acid-retaining limestone soils and loess soils, which encourage fruitiness.

It certainly has some of the aromatic attack of Sauvignon Blanc and similar zesty acidity but is still very much its own wine. In addition to Királyléanyka, Kősziklás’ has 20% Olaszrizling, 20% Müller-Thurgau and 10% Irsai Olivér. It is pleasantly peachy, grapey and floral with long and lively acidity.

Kősziklás, which has 70 hectares of vines and has been working in its new winery for three years, is planning to expand production from its current output of 160,000 to 300,000-400,000 bottles per year, winemaker and part-owner Ákos Béger told the Budapest Business Journal.

Hilltop’s offering is also composed of 50% Királyléanyka but has an extended supporting cast of 15% Pinot Gris, 10% Sauvignon Blanc, 10%, Sárgamuskotály and 5% Irsai Olivér. It’s as clean as a whistle, with an airy nose and crunchy green apple aromas and flavors, with pleasantly tingling acidity.

I’m not sure how the Sauvignon Blanc got in there, but it appears that the six grape varieties permitted are, in fact, seven, although it could easily be considered as an aromatic variety. Hilltop has a whopping 400 hectares and has started to grow some resistant varieties that don’t require spraying, Kamocsay told the BBJ.

The Szivek winery has 18 hectares in the limestone vineyards of the Pilis hills, an area perhaps better known for hiking and which once belonged to the Archbishop of Esztergom. Some 3.5 hectares are now certified organic (with more under conversion), including the Cserszegi fűszeres that made up 10% of its #Neszmély.

Szivek’s is the pick of the bunch for me and features 50% Chardonnay and 40% Müller-Thurgau. It oozes fresh green apple and grape soda on the nose and palate. It is light and soft off the palate, but it gives a citrusy kick in the otherwise elegant finish.

For its part, Bősze, from Aszár (the wine region used to be known as Aszár-Neszmély), went with 40% Pinot Gris, with the rest made up of Müller-Thurgau (25%), Riesling (20%) and Irsai Olivér (15%). Despite the somewhat different composition to some of the others, it still ticks all the boxes regarding what a #Neszmély should be like, showing that the flexible approach work when it comes to bottling the essence of the place.

Bor Tér Being Held in Szeged After 2-year Hiatus

Time for Wine Palates to go Back to School