Going Beyond the Borders and Back Again

Panorama of hills and vineyards near Eger in Hungary.

Pinceszer 2022 showcased wines made by ethnic Hungarian winemakers from neighboring countries, who collectively make a considerable contribution to the broader Hungarian wine scene.

Ethnic Hungarians in the southern regions of Slovakia, known in Hungarian as the Felvidék (literally “Uplands”), have a huge impact locally, making wines from outstanding terroirs with considerable creativity and with plenty of organic, biodynamic and natural winemakers among them.

One wine that stood out from this tasty pack, and would stand out of many a pack for its intensity and the distinctive winemaking behind it, was Amber 2018 from the Geönzeöl cellar, from the banks of the River Garam, a tributary of the River Danube and is known as the Hron in Slovakia.

The area surrounding the river has a complex cocktail of soils, with the volcanic bedrock covered in limestone-rich clay. The proximity of the River Garam and the nearby Danube can lead to botrytis (also known as noble rot) forming, and Amber 2018 is made from botrytized Olaszrizling grapes that were spontaneously fermented on the skins to dry.

Because of the very high sugar concentration brought about by the botrytis, this orange wine is way off the usual non-fortified wine scale with alcohol of 17.5%. It was then aged for three and a half years in 10-year-old American oak barrels. It was bottled unfiltered and has “some lees swimming around in it,” to quote winemaker Attila Geönzeöl, making it a little cloudy.

While the alcohol does stick out a little, it has excellent body, concentration and tannins to match it, with notes of leaves, vanilla and cigars. It is currently only available from this uncertified organic cellar (www.granium.sk) and costs USD 20. I suggest you drink it like Fino sherry, the driest and palest of the traditional varieties.

The least developed region where there are a significant number of ethnic Hungarian winemakers would have to be Kárpátalja, in western Ukraine, where the winemakers have struggled against under-capitalization. The posthumous winner of the Winemakers’ Winemaker (Borászok Borásza) award for 2022, Vilmos Thummerer, who died at the age of 78 on Dec. 21, 2021, after a long illness, was born in Kárpátalja.

However, it was in the Hungarian region of Eger where he made his name. The former flower grower, who started making wine in 1984, built up an impressive estate and a large, cavernous, labyrinth-like cellar that is carved dramatically into the tuff cliffs and rock of Noszvaj, in a Tolkienian Middle Earth-like magical setting, some 13.5 km by road to the east of the city of Eger.

The voting for the Winemakers’ Winemaker for 2022, the 16th time the title has been awarded, commenced at the Hungarian Academy of Sciences on March 4, with the 50 best Hungarian winemakers nominated by the winners of recent years. On April 29, the nominated winemakers, with the one obvious exception of Thummerer, cast their votes to decide the winner. Incidentally, Thummerer also won the Hungarian Wine Academy’s Winemaker of the Year title back in 1995.

The award was accepted by Thummerer’s granddaughter, Polett Pulay, who is already deeply involved in the winery as its export and office manager. Her grandfather long worked closely with the skillful and dedicated winemaker József Lamport. He oversees the production of around 600,000 bottles a year from more than 110 hectares of vineyards.

The quality is really consistent, with certain wines outstanding. An example of the latter is Egri Kadarka Grand Superior 2015, one of the stars at the Eger wine region tasting held at Société Budapest on April 26.

A wine like this justifies Kadarka being referred to as the “Hungarian Pinot Noir.” It was made from grapes in a nicely shriveled state and has a pale tawny color, with complex notes of tobacco, strawberry jelly and sun-dried tomato, and elegant fine-grained tannins. It costs HUF 5,540 from wineloverswebshop.hu.

Kadarka vines were pretty much all grubbed up in Eger during the Socialist system due to it being difficult to work with, but it is making quite a comeback in the north-eastern region with wines like this. 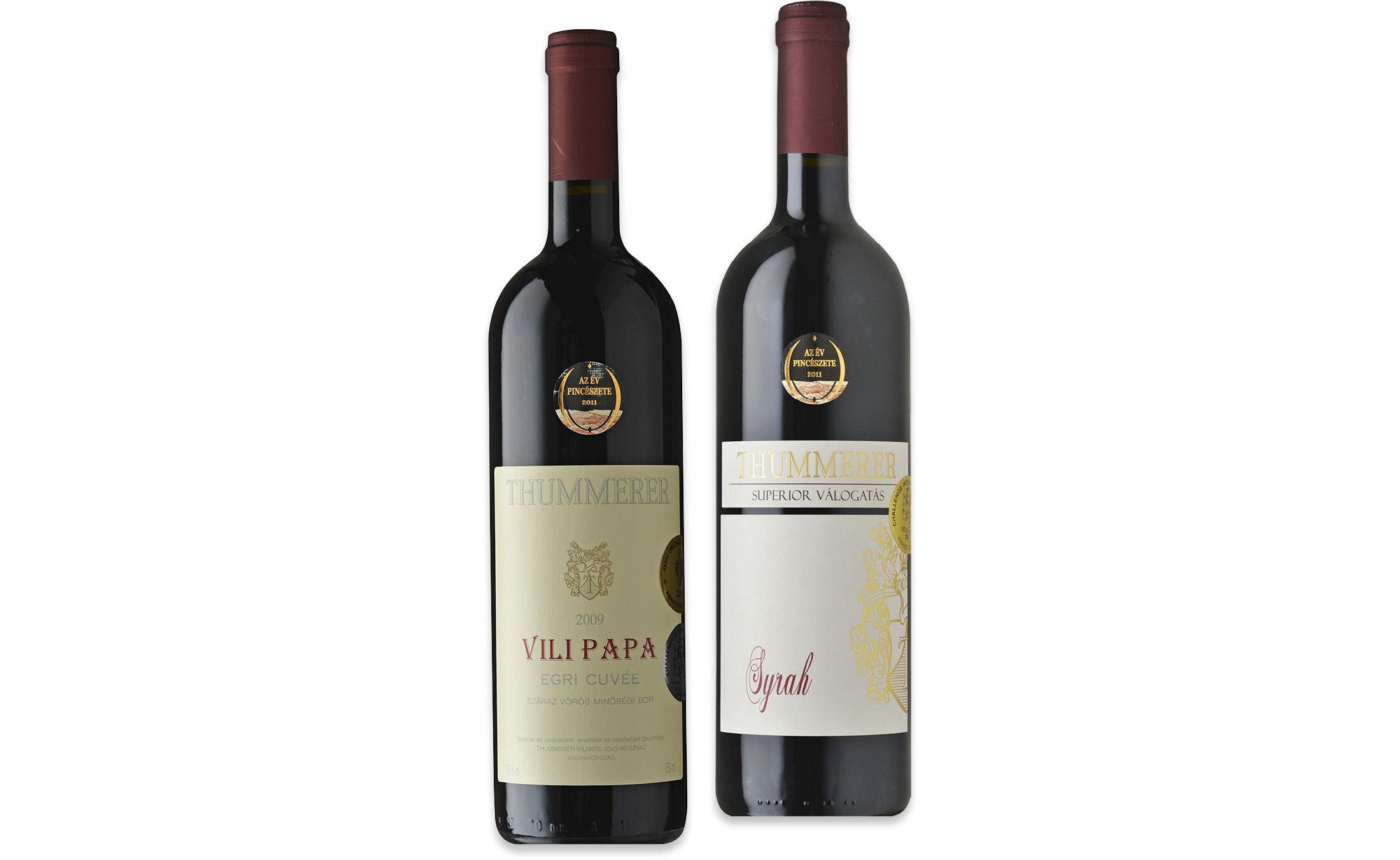 Another excellent wine at the tasting was Thummer’s Egri Syrah Superior Válogotás 2016, which was varietally pure with a deep purple color and peppery spiciness to go with the layered, juicy black fruit and mouth-filling yet smooth tannins.

The 2018 vintage of the Syrah won the best Syrah at the 2020 edition of Vinagora International Wine Competition, which was hosted in Budapest, and where I was one of the judges. In a remarkable performance, Thummerer also claimed the best Hungarian Cabernet Franc and Cabernet Sauvignons, with its Egri Cabernet Franc Superior Válogatás 2018 and Egri Cabernet Sauvignon Superior Válogatás 2018.

The latter is quite a result as many would consider Eger too cool a climate for fully ripening the more internationally widespread of the Cabernets. However, it is getting warmer, and there a plenty of stunning vineyard sites that can adequately catch the warmth and the sun’s rays, such as Szomolya’s Nagyvölgy-tető vineyard from which this wine comes. For a review of Thummerer’s most famous wine, Vili Papa Cuvée, from the 2009 vintage, see the first issue of the Budapest Business Journal from this year.

The best red wine overall at Vinagora 2022 was Pannonhalmi Főapátság’s Infusio 2019. This is the third time this fabulously layered and complex yet fresh Merlot-Cabernet Franc blend, which is only made in top vintages, has won the red champion gong, the 2016 topping the 2019 competition, and the 2017 the 2020 edition.

The best white went to Varga Pincészet for its Aranymetszés Friss Sauvignon Blanc 2021. This huge Badacsony winery is often dismissed as a maker of plonk, but this award shows it can also make very serious wines.

The team behind Borászok Borásza also has an eye on the future of winemaking and hands out a bursary of HUF 1 million to a fledgling vintner to get their career on track. The Future Winemaker award went to the newly-graduated winemaker Heni Trinfa, who told the BBJ that the bursary is “a huge opportunity, which has already led to lots of new acquaintances and my name has reached wonderful new places.”

She added that it has opened the world up for her and will take her to a place she would never have imagined. She will soon travel to the Côtes-du-Rhône in France for a three-month internship at the Maison Plantevin winery.