The sight of Eger’s Nagy-Eged hegy, a hill of pure limestone that rises majestically out of rolling landscape otherwise based on volcanic rhyolite bedrock, is made all the more remarkable by a statue of the Virgin Mary that stands on the middle of the hill. This is the birthplace of Hungary’s latest award-winning wine.

It is one of 50 wines (or 0.28%) from the 18,094 samples tasted from 56 countries to receive a much-coveted Best in Show medal in one of the most prestigious international wine competitions. In all, wines from 17 countries made this year’s “Best in Show” list, with France dominating, taking 15 of the top 50 spots.

St. Andrea’s 2017 Grand Superior Bikavér is a blend of Kékfrankos, Merlot, and Cabernet Franc, with some Cabernet Sauvignon and a touch of Blauburger; the latter helps give the wine a delightful aromatic lift.

Tasted on a recent trip to St. Andrea, this vintage blew me away with its amazing structure and elegance, offering eucalyptus, earth, black pepper, graphite, and sour cherry notes, leading to a very long and balanced finish, despite its 15% alcohol.

It was destemmed and fermented in stainless steel, then aged for 18 months in oak barrels. For the record, I put it at 95 points in my tasting notes, which were compiled from wines not tasted blind, though I rarely hit 90 points for Hungarian reds. This wine is a relative bargain at HUF 9,800 from the winery or Bortársaság.

According to Eger’s classification system, Grand Superior denotes that the wine is from a single-vineyard; it can also be a single varietal wine, not just a blend. 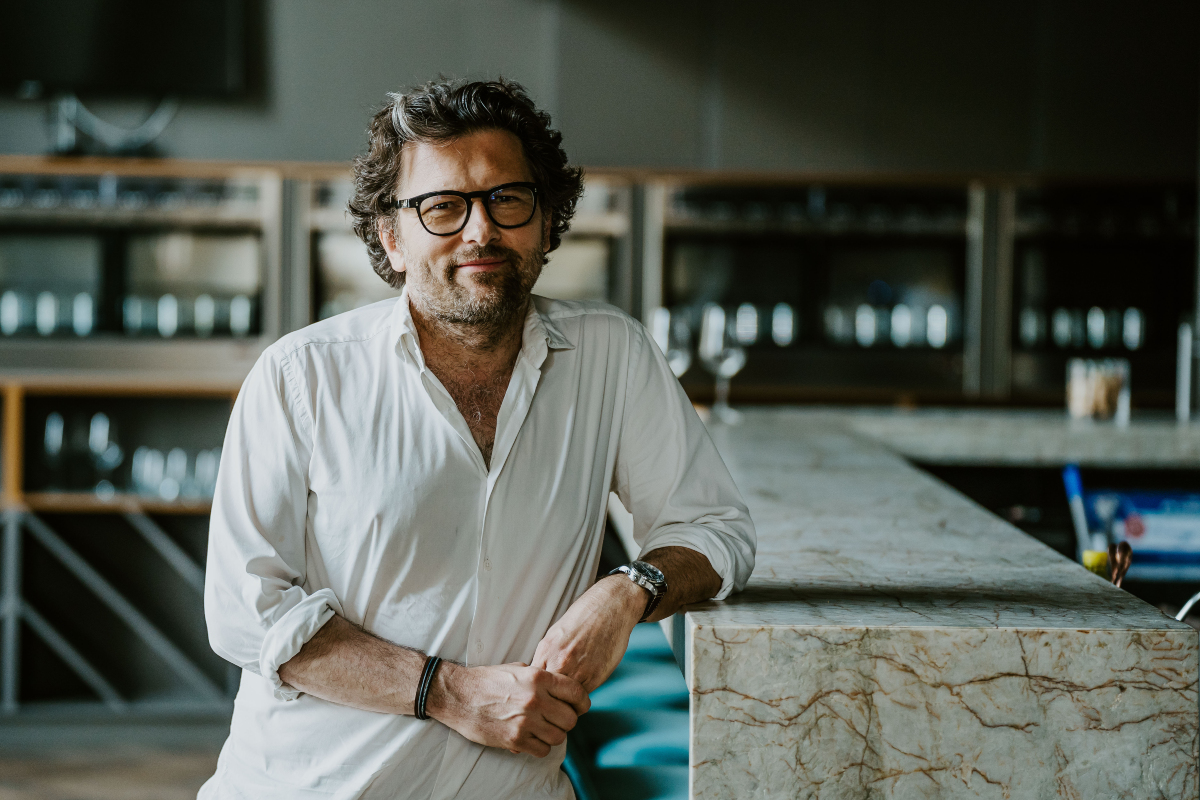 St. Andrea will soon release yet another Bikavér from Nagy-Eged hegy, called Agapé, which comes from grapes higher up the hill, towards the peak. This part of the hill is particularly hard to work, with virtually no topsoil, a lack of water retention, and very exposed to the sun’s rays.

The resulting wine from the 2017 vintage is also a Grand Superior made from Kékfrankos, Kadarka, Pinot Noir, and Syrah. This is a huge wine with intense and extraordinary aromas and flavors of red berries, blackcurrant, vanilla, rosemary, earth, dark chocolate, and tobacco. The oak and alcohol (a high 15%) are beautifully integrated and add to the wine’s fabulous structure. This one will cost around HUF 25,000 from the winery.

Another single-vineyard St. Andrea Bikavér, Hangács dűlő Egri Bikavér Grand Superior 2017, comes from a 17-hectare vineyard in the village of Demjén, where there is a thin layer of clay topsoil under which lurks volcanic rhyolite tuff. This has long been one of my favorites due to its earthy, spicy, and fruity character. It scored 93 in the DWWA 2021.

Incidentally, the Eger region has just received an image makeover with the ultra-creative graphic designer Géza Ipacs, who’s behind so many labels from Eger and, indeed, across the country, designing a new logo.

Unsurprisingly, given the region’s connection to Bikavér, or Bull’s Blood, the logo is based on a bull. Drawing inspiration from mythology, the animal has been given a pair of contemporary-looking, sleek wings.

Ipacs told the Budapest Business Journal that the logo incorporates the ideas of elevation and lifting off to a higher plain or place and the concept that the wine is light and elegant, rather than heavy like a bull. He also said that a good logo should look nice on a T-shirt, and I have to say that I’d have been more than happy if they’d been handing out Eger T-shirts at the launch event.

The winged bull will be used on communication materials and to promote wine festivals, with the next such, Vino Kóstoló Ünnep – a blend of wine, gastronomy, and culture, being served up on Dobó István tér, in Eger from July 21-27. It is yet to be determined if this cool logo will make it onto Eger’s bottles, which have taken on a unique shape for the high-end wines.

Pulling in a Platinum award with a whopping 98 points at DWWA 2021, and one of only 14 wines in the entire competition to be awarded such a high score, was Patricius’ Aszú 6 Puttonyos 2017 from the Tokaj region. Estate manager Péter Molnár told the BBJ that the 2017, 2016 and 2015 vintages were great for making Aszú.

This is a dynamic style of modern-minded Aszú, with a focus on freshness and fruitiness. It seduces you as soon as you look at it with its bright yellow meets pale gold color, then continues on the palate with ripe apricots, fresh apricot jam, tea, white flowers, and succulent botrytis. It is soft, round, creamy, and smooth, with lively acidity bringing a very long finish that is never cloying.

In all, Hungary won four platinum awards, all for botrytized wines from Tokaj. The others were from Juliet Viktor, with a six puttonyos Aszú 2017 and Grand Tokaj, for a five puttonyos Aszù 2014 and an Eszencia 2013; all three scored 97 points.

A score of 96 points led to a gold medal for Dobogó Pinceszét’s Furmint 2017. “I’m even happier with a gold for a dry wine than with the Platinum we earlier got for an Aszú,” Dobogó winemaker Attila Domokos told the BBJ.

This wine is delightfully fresh, oozing Williams Pear notes with linear, crispy acidity, and is outstanding value at HUF 3,900 a bottle from the cellar. It’s in youthful shape now, despite its four years of age, and is still as fresh as a daisy and will keep getting better, picking up complexity.

The grapes for this wine weren’t crushed, just destemmed, then pressed at low pressure, with clarification carried out in stainless steel tanks, before fermenting and aging in 300-liter oak barrels, 10% of which were new, and 90% used (second-, third- and fourth-fill barrels). No insecticides or herbicides were used in its making.

This article was first published in the Budapest Business Journal print issue of July 16, 2021.