A Pilgrim’s Progress to Worship Wine at Pannonhalma

The Cseri family, who run the Cseri Pincészet. The principal winemaker is Nórbert Cseri (blue shirt), but his son Barni is now starting out.

As does its famous Benedictine Abbey, the hills of the Pannonhalma wine region in Hungary’s northwest rise majestically out of the flatness of the Kisalföld (Little Great Plain) and certainly look like prime vineyard sites.

The predominantly loess soils with their high lime content help the grapes retain acidity, keeping the wines fragrant and fresh. As temperatures rise in what has traditionally been considered a cool-climate wine region, this ability to keep the acid will be crucial.

Pannonhalma is hardly a haven of Hungarian indigenous varieties, but it is prime Sauvignon Blanc territory with a style that’s vibrant but not overly aromatic, reminding me a little of the Sauvignons of the Südsteiermark region in Austria, sitting deliciously somewhere between the more restrained Old World and the more opulent New World in style. Riesling is equally popular here, with some rich, complex wines being made.

While Pannonhalma was once split equally between red and white wine production, white dominates today, although the darker wines are now picking up plaudits. Indeed, perhaps a benefit of global warming is that the region has been producing some concentrated, complex reds due to heightened ripeness.

Having been to the Pannonhalmi Főapátság Pincészet (Pannonhalma Archabbey Winery) countless times, but not since before the COVID pandemic, it was a privilege to return recently to the cutting-edge gravity-fed production unit, built discreetly into the hill under the monastery itself, and also to check out another five wineries for the first time.

Pannonhalmi’s winemaker Zsolt Liptai considered the 2020 Sauvignon Blanc “the wine of the vintage.” While it has sold out, the tank sample of the 2021 that I tried is coming along nicely, with zesty elderflower and cut grass aromas emanating from the glass.

This wine is skilfully crafted by picking grapes from two vineyards on different dates; the Tavaszó provides acidity and green notes, while the Széldomb brings riper, tropical notes. Always looking to innovate, the monastery’s Sauvignon Blanc will contain a component fermented in a closed tank from the 2022 vintage to further boost its appeal by capturing more of the grape’s primary aromas. 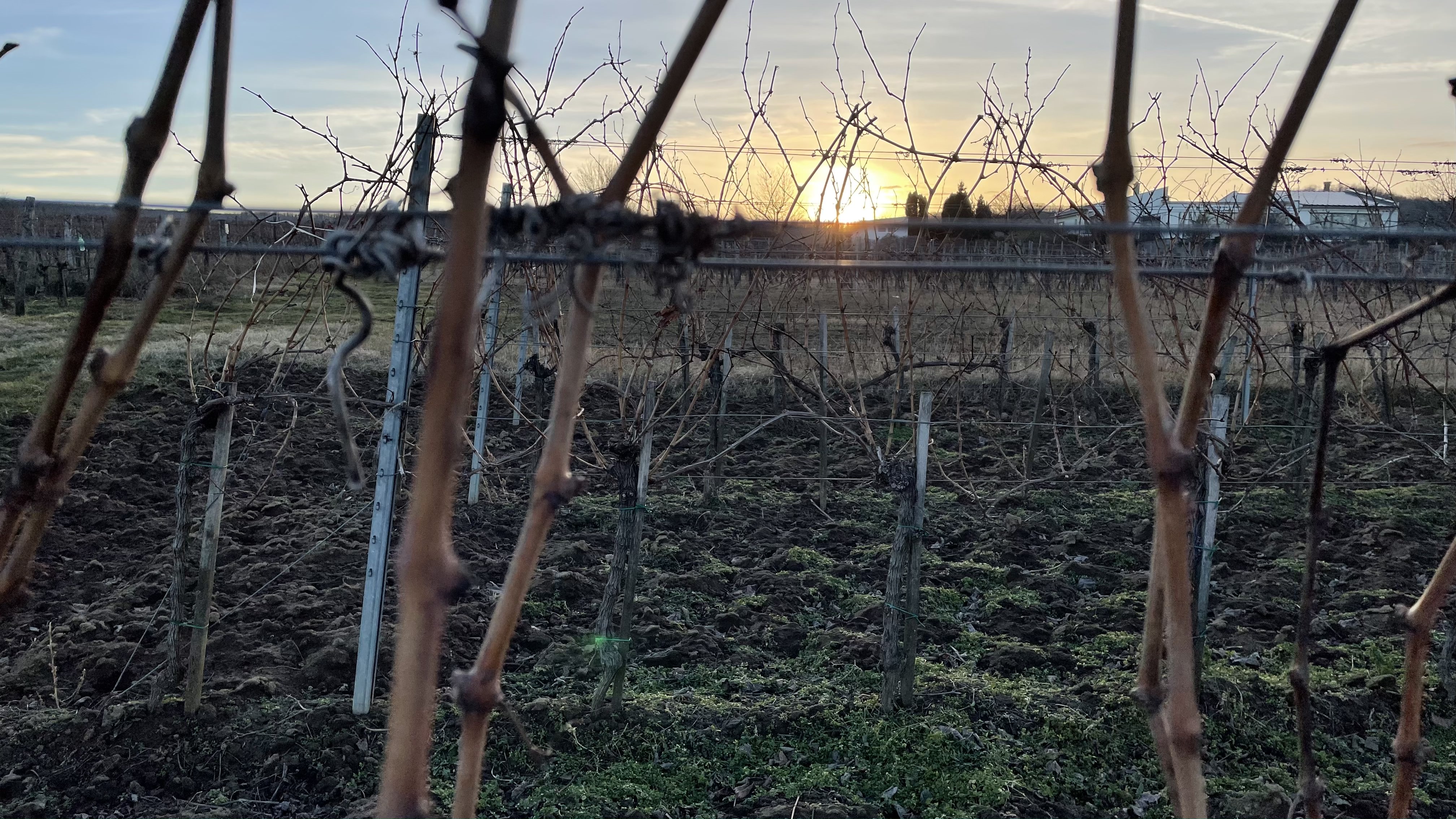 2020, which started off too cool until everything came up to speed in the summer, was also great for Riesling, with the Pannonhalmi winery coming out with both the regular yet taut and structured Rajnai rizling (the literal Hungarian translation for Rhine Riesling, to differentiate it from the unrelated Olaszrizling grape) and the more intense Prior, only released in top vintages.

The winery also makes one of the finest Bordeaux-style blends in Hungary: Infusio. It hails from a plateau on the south-facing Babszökő vineyard. The Infusio 2019 has more Cabernet Franc than usual at 40%, with Merlot contributing 60%. It is very elegant with minty aromas that beautifully complement the intense black and red fruit, with sleek tannins and an extremely long, delicious finish. The high alcohol content of 15% is nicely integrated and does not bring any burn. It costs HUF 8,950 from apatsagipinceszet.hu, the monastery webshop.

Pannonhalmi Főapátság and four of the others wineries (Hangyál Pincészet, Herold Pince, Pécsinger Szőlőbirtok, and Tár Pincészet) belong to the PH-Érték organization, whose wines are fresh, crispy blends based on a backbone of at least 50% Riesling. Pecsinger’s PH-Érték 2020 (60% Riesling, 30% Olaszrizling, 10% Királyleányka), for example, has a touch of a petrol note, bringing some complexity. The excellent Cseri Pincészet was also once a member but has stepped out. This latter still makes some fabulous aged Rieslings and a nice Pét-Nat from the same variety.

PH-Érték is a clever play on words, whereby Érték means “value” and PH can be interpreted as referring to the Pannonhalma wine region, the relatively high PH value coming from the high lime content in the soils, or the cultural value of the area.

Pecsinger has a striking space-age-like Dezső Ekler-designed winery, dramatically surrounded by vineyards, near the village of Győrújbarát. While I was tasting wine from the tank, the owner of the Pedro bakery (the place to go for breakfast in Pannonhalma town) rolled in and took a large plastic container full of wine away with him.

Wine sold in this way is still a significant part of Pecsinger’s income and it has a chain of shops in western Hungary where customers come and get their plastic bottles filled. It is transitioning over to a higher portion of bottled wine.

Another large Győrújbarát winery moving in a similar direction is Babarczi, which makes some excellent reds, including a Kékfrankos, which is ultra-rare in the wine region. Winemaker Zsuzsanna Babarczi picked the Kékfrankos relatively early and aged it in French oak, resulting in a vibrant and enjoyable light wine with restrained tannins. It costs HUF 3,100 from babarczipince.hu. The same winery’s earthy, complex, concentrated Cabernet Franc Marianum 2019 (HUF 10,000) bagged a gold medal at the Berliner Wine Trophy.

Located at the foot of the hill topped by Pannonhalmi Főapátság is the fledgling Herold Pince, which came out with its first wines in 2015. Among its 12 hectares, Herold has half a hectare of Olaszrizling, which is rare in the region, as are indigenous varietals in general.

The Olaszrizlings were the stand-out wines for me here, and apparently also for the owner, Ádam Herold, who has tagged the German world Liebling (“favorite”) onto the premium Olaszrizling. The 2018 Liebling is creamy, oily and complex, with a waxy texture, remarkable concentration and with the vibrant acidity to cut through the richness.

It was fermented and aged in oak for six months and is a bargain at HUF 2,590 from pannonborbolt.hu, having won a Grand Gold medal at Hungary’s Vinagora international wine competition. The winemaker is Szabolcs Fiderman, who also makes wine with two friends in the nearby Neszmély wine region at N3 Borműhely.

The Tár Pincészet, in Tényő, works with five clones of Olaszrizling from Hungary and neighboring countries, with an Austrian clone used to make the impressive 2021, which has citrus and herb notes and is soon to be released. The Sauvignon Blanc from here is exciting, with the 2021 costing a bargain HUF 1,950 from limapubandhostel.hu.

The village of Nyúl, with its winding cellar rows that evoke J.R.R. Tolkien’s Middle Earth, is home to Hangyál Pincészet, which is itself housed in a nicely designed modern building. Balázs Hangyál is such a fan of Slovenian Sauvignon Blanc, which has much in common with that of Südsteiermark immediately across the Austrian border, that he planted Slovenian clones. The result is stunning, with the 2021 oozing juicy gooseberry and costing HUF 2,200 from wineloverswebshop.hu. The Chardonnay from here is also delicious.

This article was first published in the Budapest Business Journal print issue of February 25, 2022.

Number of Job Adverts up Minimally