The gala was held in the exclusive Grand Ballroom of the hotel. The event was originally planned to take place in January this year but was postponed due to strict pandemic-related restrictions in place until the summer.

The BBJ Expat CEO award is given to the foreign CEO working and living in Hungary, who is considered to have done the most to contribute to the development of the Hungarian economy and its international recognition with their professionalism and dedicated work. The award has been granted every year since 2015.

“The BBJ is Hungary’s only English-language economic bi-weekly and has always played an important role in providing information for expat CEOs working and living in Hungary. That is why we decided to found an award to recognize their efforts annually,” explains Balázs Román, the CEO of the Budapest Business Journal.

The exclusive gala dinner featured many of Hungary’s most important expat company leaders and their spouses and partners, distinguished guests such as Hungarian Investment Promotion Agency (HIPA) head Róbert Ésik, as well as several ambassadors and diplomats.

Each year, BBJ’s official event partner, HIPA, presents its Partnership Award in recognition of the work of foreign-owned multinational firms for the use of local suppliers in their value chain and of the ambassadorial role their CEOs play in representing Hungary to their home boards. 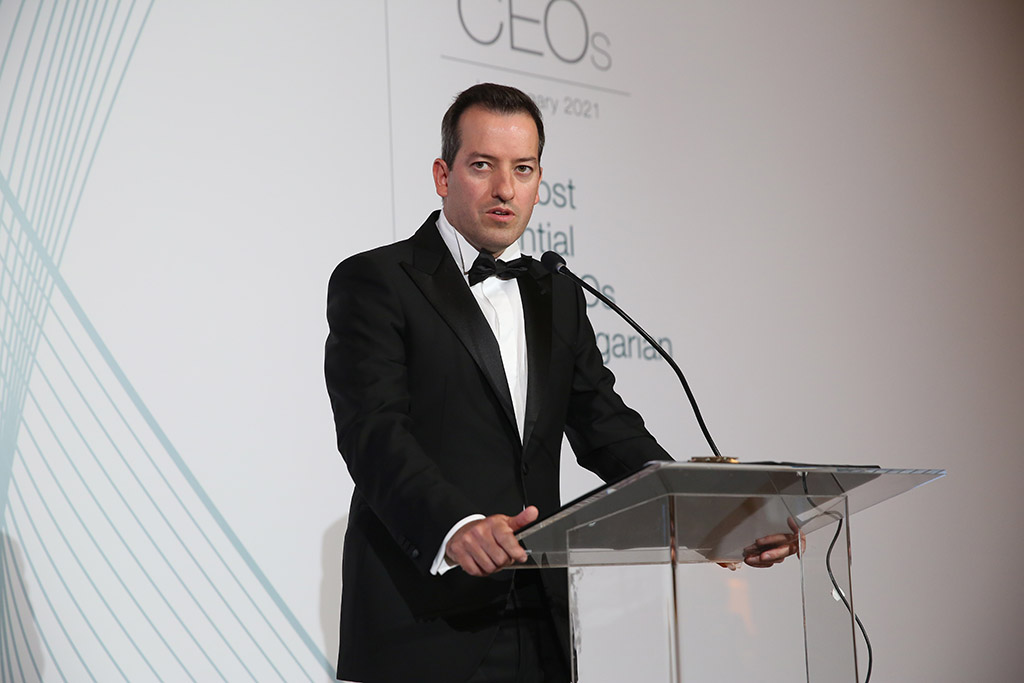 Before the main awards, BBJ editor-in-chief Robin Marshall emphasized the importance of organizations that had helped the country fight the COVID pandemic during the last two years.

“These have been unique times which demanded a unique response. So, we wanted to break away from our normal routine at this point to acknowledge the huge debt of gratitude we owe to others,” he said.

“Most obviously, there are the healthcare workers, especially those in the front line. The doctors and nurses who worked shift after long shift in hospitals and clinics and nursing homes, the GPs who had to find new ways of holding surgeries, and ambulance drivers and paramedics whose sirens could be heard all over an otherwise silent city,” he noted.

“But there have also been what we call ‘purpose-led businesses’ that went the extra mile to help us work from home and school from home, who kept essential services running, who helped us to survive,” he added.

Standing as proxies for all who had played their part, the paper’s editor-in-chief handed over Certificates of Appreciation to the representatives of two organizations: National Ambulance Service CEO Dr. Gábor Csató, and Vodafone Hungary CEO Amanda Nelson.

The National Ambulance Service has been fighting in the frontlines of the pandemic since its outbreak. Vodafone supported the NAS through generous cash donations, and its foundation, together with the ambulance service, developed the LifeSaver App so ordinary people could get emergency medical assistance at the time when it is most urgently needed. 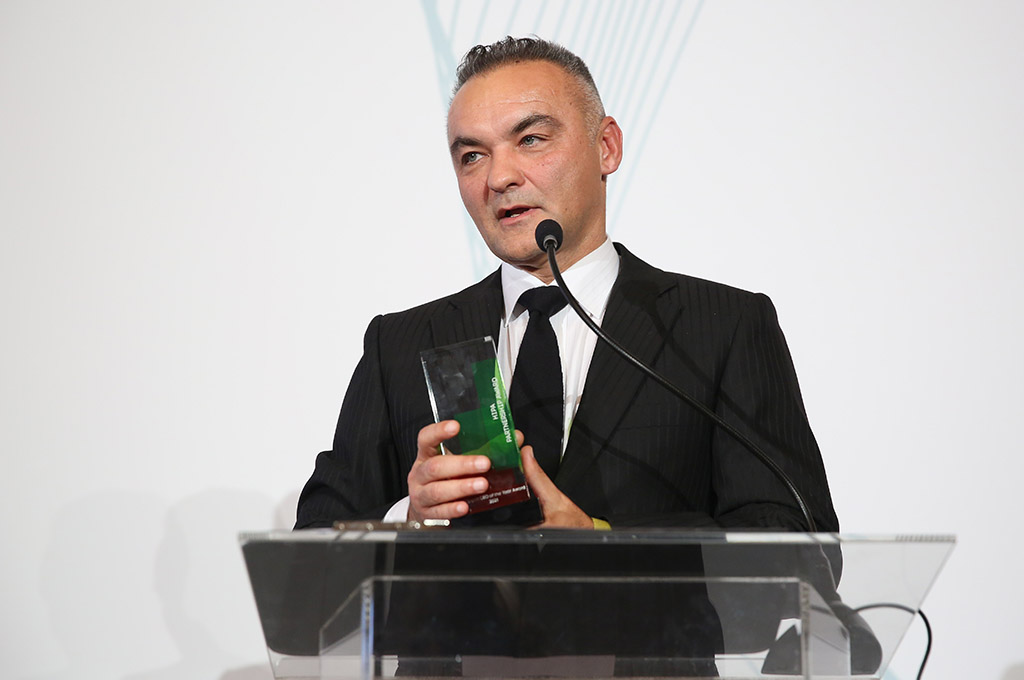 Taking the stage after the presentation of the certificates, HIPA CEO Ésik noted that the past 18 months have been “extraordinarily challenging. From the economic perspective, there are signs of recovery, and I personally believe that we have a chance to achieve a 7% GDP growth by the end of the year,” Ésik said.

He outlined three significant successes HIPA managed to achieve in the COVID period. “Against all odds, we have managed to close a successful year, a successful 18 months. We have been able to close deals in the value of EUR 4.1 bln in 2020,” he said.

He explained the agency’s reaction to the COVID situation. “We have been able to react fast, we came up with COVID-specific subsidy programs already in April 2020, and we have been able to contribute significantly to the economic relaunch of the country by working together with 1,400 companies in the past 18 months,” he said.

“I’m also proud that we were able to close the largest greenfield FDI project of the country earlier this year, which is an investment of EUR 1.9 bln. So I think these results in these challenging times speak for themselves. It would not have been possible without you,” he told the audience.

This year’s HIPA Partnership award was presented to Nevijo Mance, director of engineering at Jaguar Land Rover Hungary. Ésik presented him with the prize after playing a short video about the winner.

Mance greeted the audience in Hungarian before switching to English. He noted that while the past 18 months were challenging, he had come to realize, “It’s not a lost period; in terms of achievements and collaborations in Hungary, we did a lot,” he said.

He acknowledged that the changes in workplace routine brought about by the pandemic brought their own challenges. “I represent a generation that believes that magic happens when people come together. I do face engineers in their early 30s, late 30s who are very comfortable working from home,” he said. 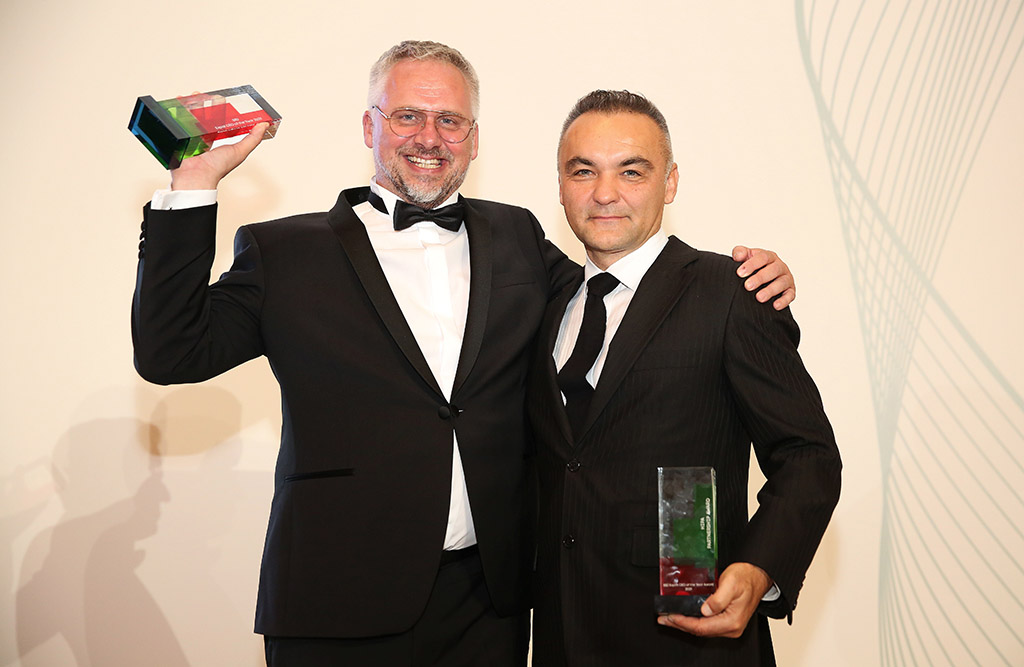 The winner of the Expat CEO of the Year award was selected by a professional jury of five just 30 minutes before the gala started. The panel consisted of BBJ CEO Balázs Román, American Chamber of Commerce in Hungary CEO Írisz Lippai-Nagy, HIPA CEO Róbert Ésik, German-Hungarian Chamber of Commerce and Industry president András Sávos, and last year's Expat CEO of the Year winner Melanie Seymour.

Jury members are charged with nominating expat CEOs for the award based on criteria such as innovative skills, successes on domestic and international markets, being prominent and committed representatives of their mother country in Hungary, and their impact on Hungary’s economic life. To qualify for the award, the CEO must have lived in Hungary for at least two years at the time of nomination, and the company’s financial results must be positive.

Taking the stage to present the shortlisted candidates this year, Marshall reflected on an interesting phenomenon among past winners.

“Before I read them out, let me just quickly explain something. It is not unusual for winners of this award to be promoted and to move countries to bigger jobs,” he noted. “However, when our shortlist was published back in January, the bosses of one of our trio, Daniel Korioth from Bosch, were so impressed they promoted him and moved him to Turkey virtually right away. Daniel had intended to be here anyway, but the time pressures of what is a very big role have defeated that ambition,” Marshall explained.

The shortlisted company heads this year were: Prabal Datta (managing director for Central and Eastern Europe of Tata Consultancy Services), Erik Slooten (CEO of Deutsche Telekom IT Solutions Hungary), and Daniel Korioth (general manager of Robert Bosch Kft. until August 2021, when he left his position in Hungary to become president of Bosch Turkey and its representative for the Middle East).

After the screening of short introductory videos about the candidates, last year’s winner Melanie Seymour took the stage to explain the process. Before revealing the name of this year’s Expat CEO of the Year, she shared an anecdote about her return to the Hungarian capital.

“Coming back, it’s been so interesting how small Hungary and Budapest are. The most amazing thing that happened was that I got into a taxi on Wednesday and the taxi driver went, ‘Melanie, you are back!’,” she told the audience, prompting instant laughter. 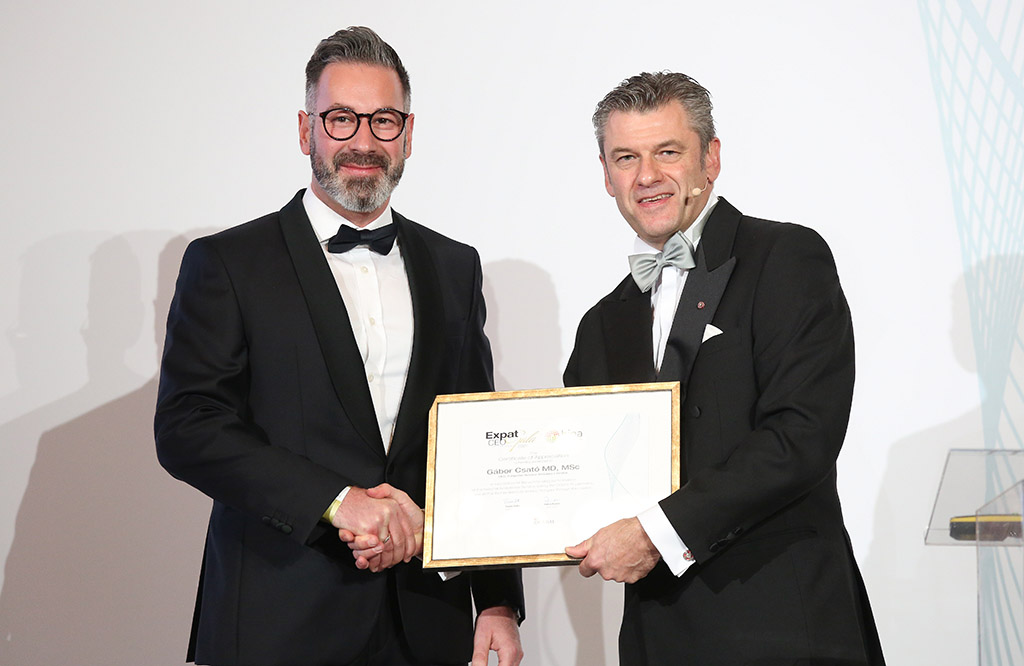 The seventh Expat CEO of the Year award went to a stunned Erik Slooten, who made his way to the stage amidst a wave of applause and had no prepared speech.

“Thank you very much to Hungary for making it possible for us to keep growing, to keep bringing talent, although it’s tough out there, the battle for talent, but that’s great for Hungary,” he said. He encouraged expats to explore the country, noting that the region is beautiful and that cities such as Pécs, Szeged, and Debrecen, where his company is investing, are well worth visiting.

“I hope to continue to do this, and even if I probably won’t be the CEO of Deutsche Telekom IT Solutions Hungary forever, I will always be tremendously grateful for the support I received from HIPA as well. They are a fantastic partner,” he said.

“I also want to dedicate this to my team, the 5,000 people that work for Deutsche Telekom IT Solutions Hungary, and I promise it will grow,” he added, noting that it provides 24/7 support to customers.

After the conclusion of the main event, Marshall returned to the stage to thank the sponsors and partners for their support and the CEOs, diplomats, and other decision-makers for attending. He said goodbye quoting the late, great Irish comedian Dave Allan’s words: “Thank you, good night, and may your God go with you.”

The networking after the gala went on into the late hours of the evening, with guests enjoying the hospitality of Corinthia’s Valletta lobby, where a large selection of desserts awaited them. There was a champagne and cocktail bar sponsored by Penny, while a “music sommelier” provided background tunes for the conversations. 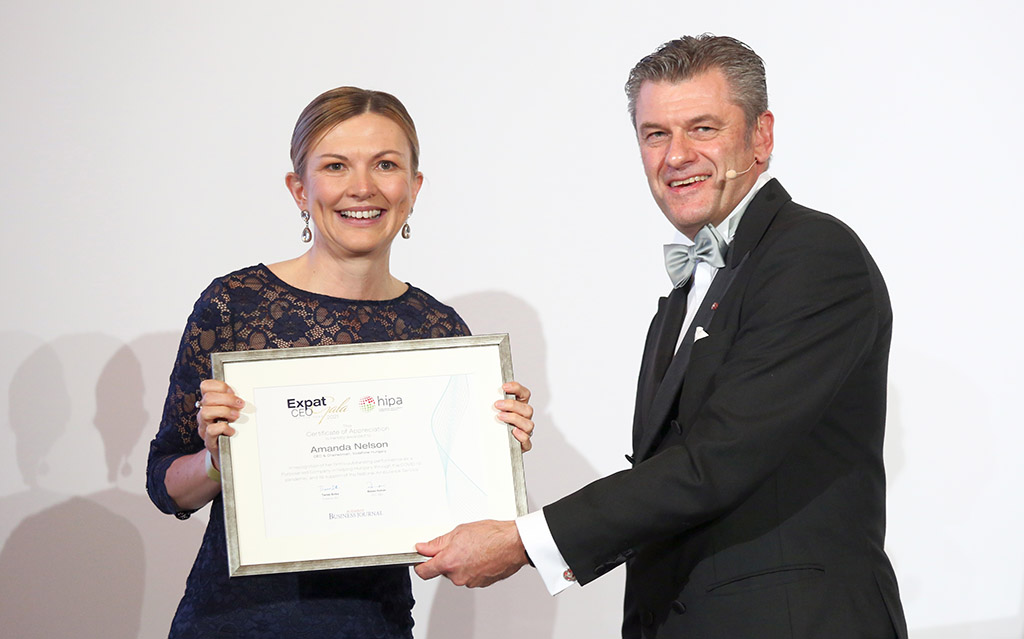 Slooten is the first Dutch national to win the BBJ Expat CEO of the Year award. The 2020 winner was BlackRock’s Melanie Seymour, the only Brit to date to be recognized as the Expat CEO of the Year. Taira-Julia Lammi, CEO of ABB Hungary Kft., won the award in 2019, becoming the first Finnish winner and the first woman, while in 2018, the title went to Marc de Bastos Eckstein, CEO of Thyssenkrupp Components Technology Hungary Kft. In 2017, it was Jörg Bauer, then of GE Hungary, in 2016 it was Jost Ernst Lammers, of Budapest Airport Zrt. (all three German nationals), and the inaugural award was presented to Spain’s Javier González Pareja, of Bosch Magyarország.

The main sponsors of the evening this year were Audi, MAN Truck and Bus, Penny Market, and PwC. Arval, BNP Paribas, Heineken, and Thyssenkrupp also supported the gala. Prime Time Communications was responsible for the organization, and Special Effects International provided the technical background. 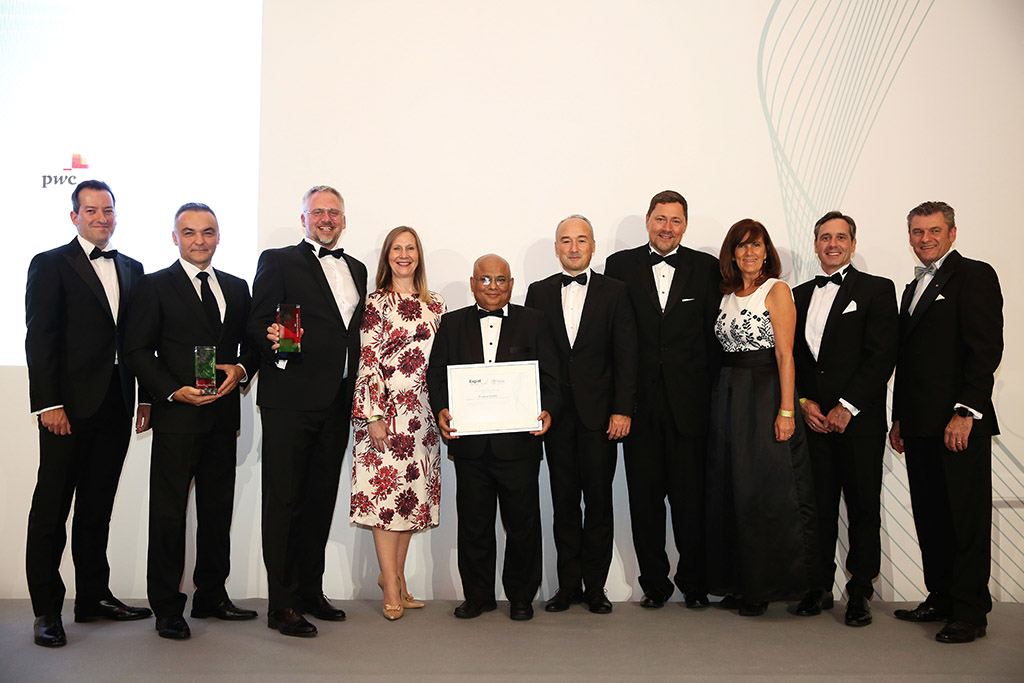 Nominees, winners, and jury members at the 2021 Expat CEO Awards.

This article was first published in the Budapest Business Journal print issue of October 8, 2021.

May full of diversity organized by HBLF and its partners