Although the April 30 event took an English theme, this was very much an international affair; fittingly so, as St. George is the patron saint of several other countries and cities alongside England.

The event was organized by Englishman Stephen Linfitt, publisher of XpatLoop.com, and the brains behind another charity fundraising event built around a British idea, the annual November Fireworks Party.

Speaking at event, held in the Grand Ballroom of the Corinthia Hotel Budapest, Linfitt noted that St. George’s Day heralds the arrival of spring in the traditional Ukrainian calendar, and that the saint is recognized by many countries.

“Nationality is an accident of birth, and so the goal was to bring together XpatLoop.com readers of many nationalities to extend the bonds of friendship and solidarity in an enjoyable way to mark St. George’s Day, whilst raising funds for children in Ukraine,” he said.

Antónia Mészáros, the Executive Director of UNICEF Hungary, told guests that her organization is no newcomer to Ukraine, and has been providing humanitarian assistance in the country since fighting first broke out with Russia’s seizure of Crimea and the low level so-called “frozen war” around the Donbas in the east that began eight years ago.

“Every child in Ukraine is suffering right now and they all need help. UNICEF doesn’t evacuate, when the going gets tough. We haven’t pulled out of Afghanistan after the Taliban takeover and we’re not leaving families to their fate in the Ukraine either,” she said. 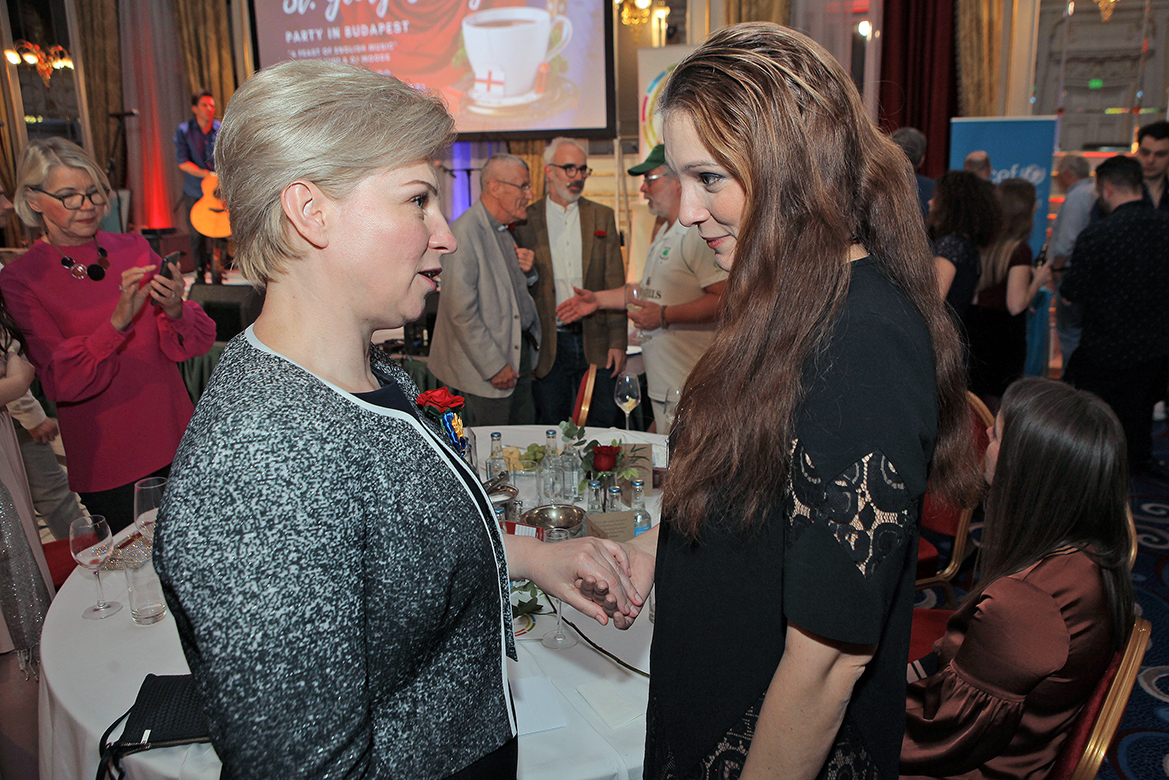 She added that the United Nations Children’s Fund is working to get more staff and resources into Ukraine. “Right now, there are 200 UNICEF colleagues working out of five regional offices offering all kinds of humanitarian help,” she said.

The principal guests of honor were the British and Ukrainian ambassadors, both of whom spoke on the evening.

Ukraine’s Ambassador to Hungary, Liubov Nepop, emphasized Ukraine’s gratitude to the assembled guests and to the international community at large for its solidarity and friendship, and received a spontaneous standing ovation from the audience.

“The local British community with our Hungarian and international friends have again shown that we are ready to give a helping hand to those in need. This time, we raised funds for children and families in Ukraine. I couldn’t think of any worthier way to commemorate England’s national day,” the U.K.’s ambassador, Paul Fox, said after the event.

They weren’t the only diplomatic representation though, with said Désirée Bonis, Ambassador of The Netherlands, and Irish Ambassador Ronan Gargan were also among the guests.

The event sought to give guests a good taste of England. It included a wine and cheese reception, pairing both English and local cheese with wines from St George Hill near Balaton and other wineries around Hungary, as well as English gin and whisky tasting too, and even a cricket display.

Music ranged from classics from the likes of Purcell and Handel to Brit Pop covers to a DJ set drawn from 60 years of British musical hits. Ambassador Fox’s daughter Eleanor sang “Jerusalem,” the musical version of William Blake’s poem that has become a sporting anthem, and there was a funny poetry reading about Shakespeare from Scallabouche founder Alex Latham, who also hosted the evening.