David Holzer finds himself on an engaging and interactive multi-sensory voyage through humankind’s musical journey, from aping the sounds of nature to sampling classical tunes in the 21st century, at the award-winning House of Music.

I was pleasantly surprised by my visit to the House of Music Hungary, to use the official English translation for the Magyar Zene Háza. Most of the time, my goal when I visit any exhibition space is to whizz through the stuff I’m meant to be there to look at as quickly as possible and head for the museum shop or café to finger fridge magnets or eye up cakes.

Before my visit, I was most interested in seeing the already iconic building designed by Japanese architect Sou Fujimoto which won an open, anonymous competition and has been receiving plaudits ever since. This began even before the House of Music opened, with CNN and the World Architecture Community listing it as one of the 10 most anticipated new buildings of 2021.

In 2022, Time Out magazine voted the House of Music runner up in its “best new thing in the world to do in 2022” list. In case you’re curious, number one is the Maison Gainsbourg, opening in Paris in spring of this year and dedicated to the life of the French singer Serge Gainsbourg, globally famous for his hit “Je T’aime… Moi Non Plus” and for making Whitney Houston blush on live French TV.

The first thing I noticed about the House of Music is that, like many architectural wonders of the world from Stonehenge to the Leaning Tower of Pisa, it’s surprisingly small. This is no bad thing as it adds to the sense that it is something you stumble across, tucked away in City Park. What I liked most about the building was the effect of being inside it, like being sun-dappled under a canopy of trees.

I also like the way it’s built around a central spiral that runs from the educational section at the top through the level that houses the entry, performance spaces, café, and shop down to the permanent and temporary exhibition level.

For me, form and function are married perfectly in the design. When I later sat down with Márton Horn, institutional director and a prime mover of the project from the very beginning, he explained how they arrived at that harmonious blend.

“The Japanese approach to architecture is to start with form and environment. In Europe, function is always core. We had to learn each other’s ways. Our agreement was that we, on the Hungarian side, could ask to change the design if it affected the function of the building. If our suggestions only related to the design, the Japanese could reject them.” 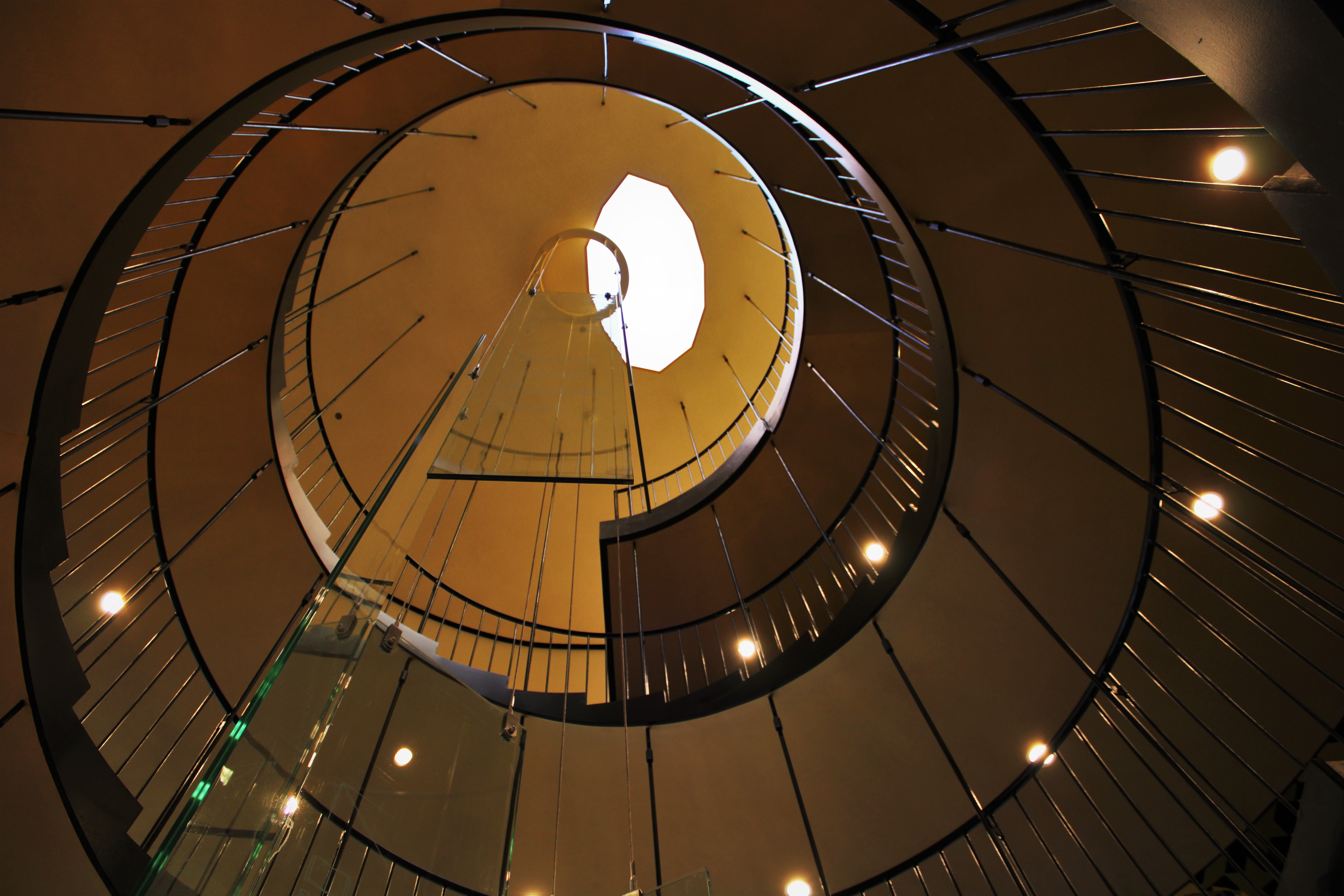 I must admit I didn’t make the connection between the location of the House of Music, its architecture, and the way the exhibition proper starts until I started to type this paragraph.

The exhibition begins by creating the sense that the visitor is in a forest listening to animal sounds, alluding to the theory that music arose when early man attempted to mimic what he heard. There’s also a set of conga drums to bang on, related to the idea that our first attempts to make music as a species also began with rhythm.

In case you’re wondering whether this isn’t all a trifle cacophonous, I should mention that visitors all wear headsets with a device fitted that triggers the interactive displays using a green light. 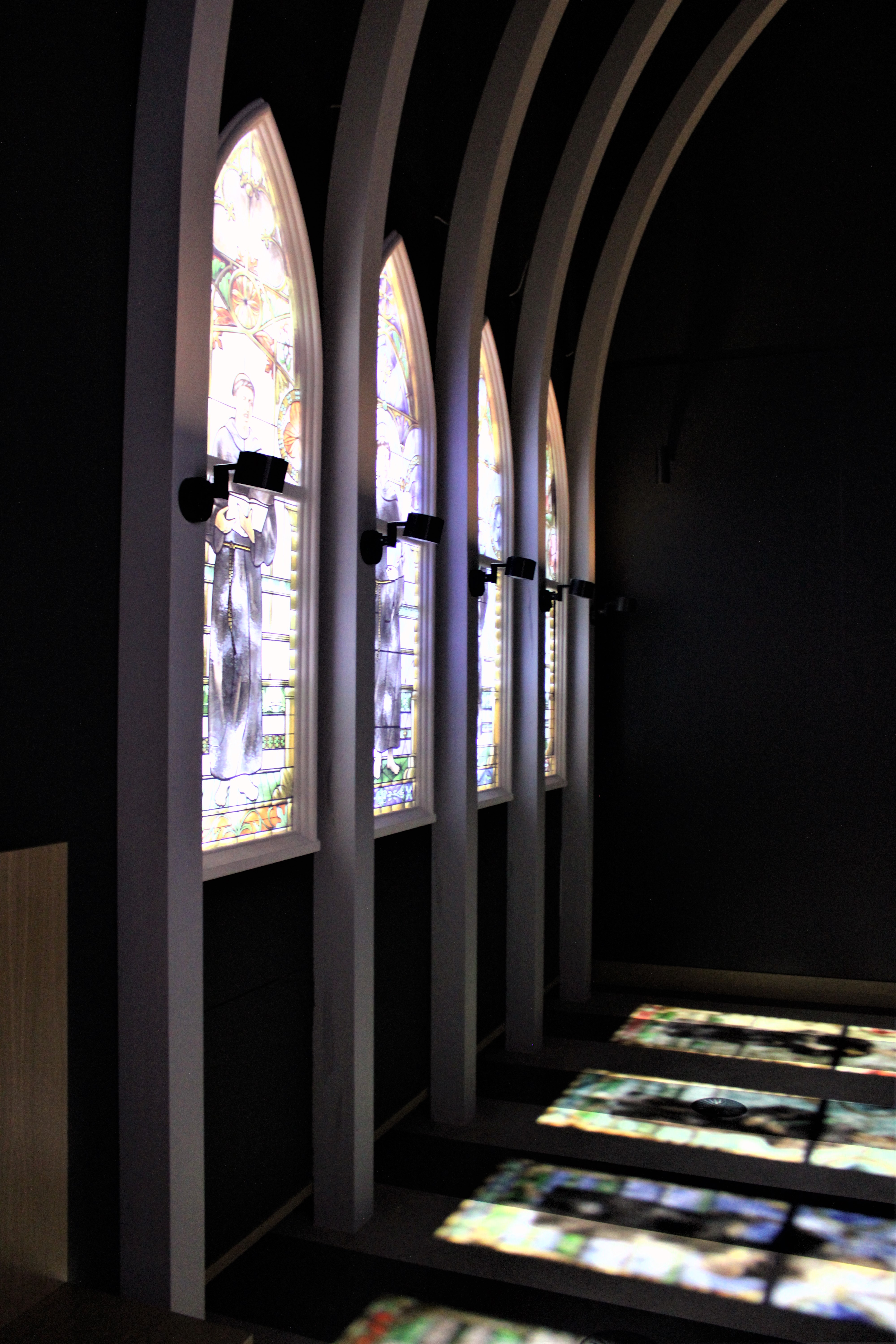 Point your head in a particular direction and you’ll hear a certain sound. You might also trigger movement in a display. When you look at a monkish-looking dude on a stained-glass window in the space devoted to Gregorian Chants, for example, he moves while he sings.

Given that my interest in music really only starts with the 20th century, I expected not to be detained by spaces devoted to Hungarian folk, classical music, or whatever, but that wasn’t the case. I was constantly discovering neat little touches like the snippets of film activated when I peered in the different windows of a model of the newly reopened Hungarian State Opera House.

Quite apart from the ingenuity that must have gone into planning all this, it’s a smart move to create an environment that offers so many opportunities for photos and selfies. Snapping away while interacting with an exhibit means we engage with it for longer and might eventually pay attention to what we’re looking at. 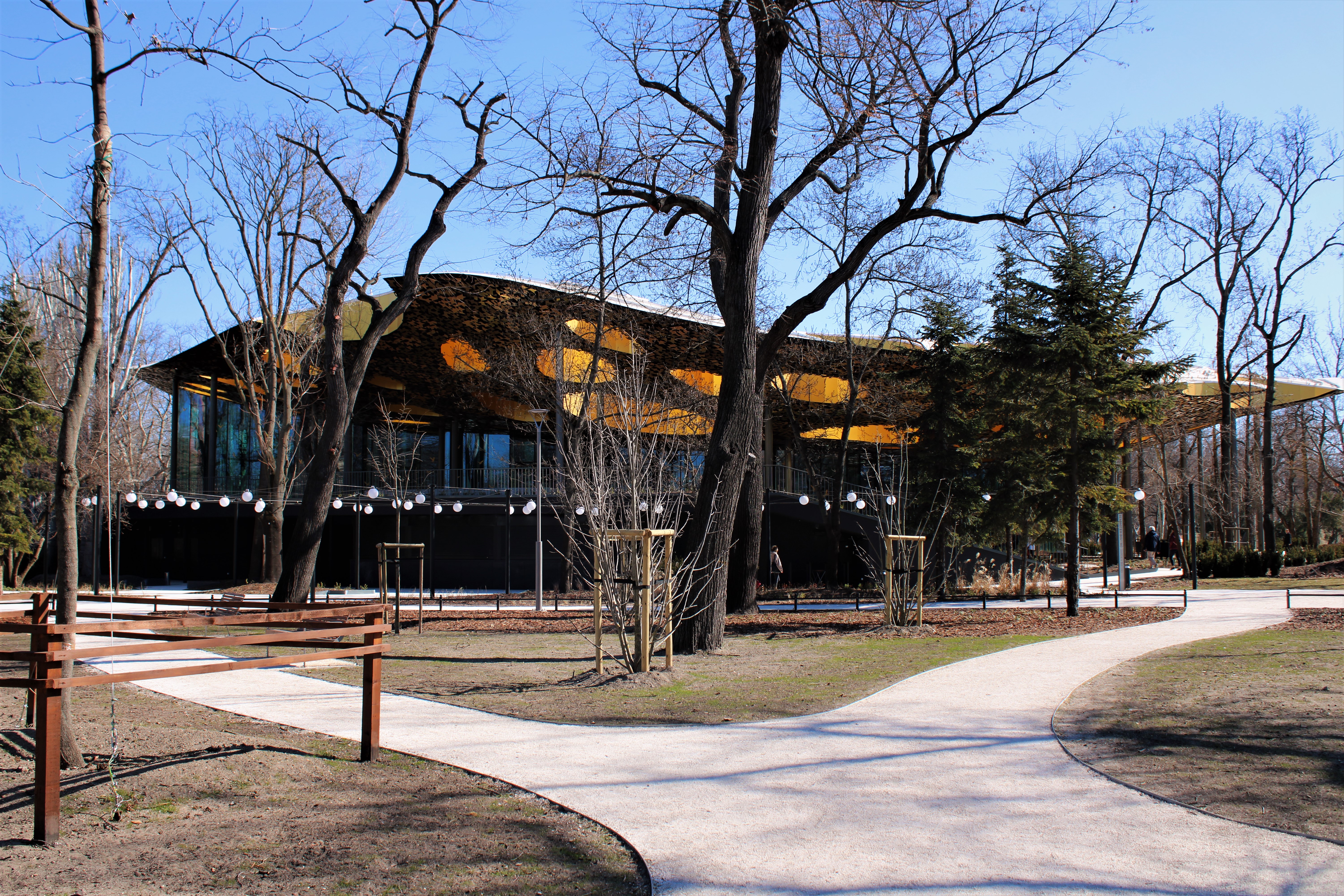 In the space set aside for the 20th century, focused on the impact of technology on music, the level of interactivity is intense. Quite rightly so, as music has been radically changed by the arrival of everything from the humble radio to the sampler. But, as I watched four boys bellow into a microphone – soundlessly, thank Elvis – I was reminded that the fundamental impulse to make music has never changed. Which was surely the point.

This focus on interaction reinforces the notion that music belongs to all of us, a guiding principle of the House of Music.

“In spring, we will open a creative sound space featuring 13 different, special instruments designed by us together with experts and the Medence Group that anyone of any age and ability can make music on,” Horn told me.

“Inspired by 20th-century avant-garde Hungarian-Austrian composer György Ligeti, who dreamed of creating an organ anyone could play, we will also introduce a robotic orchestra playing acoustic instruments. Visitors will be able to conduct this orchestra.”

This emphasis on the idea that anyone can make music makes the final space in the exhibition extra thought-provoking. It provides an elegant conclusion to the voyage visitors take through musical history and brings us to a new point of departure. But, for me, it also opens up a debate over whether we should simply consume music passively or if we should really be producers taking control. I know which side I’m on.

You can discover what’s happening in the coming months at the House of Music Hungary at www.magyarzenehaza.com.

Business Sentiment Up, Consumer Confidence Down in September