By 2030, the world must cut GHG emissions almost by half to preserve the chance of limiting global warming to 1.5 degrees. The pandemic, followed by the war in Ukraine and the spiraling energy crisis further complicated the energy landscape, but we cannot forget that climate change is a long-term challenge that affects all sectors of the economy and all levels of society.

The Budapest Climate Summit, which took place on December 7 in Budapest, brought together climate and sustainability stakeholders from Central and Eastern Europe and beyond to discuss the path of the green transition.

The Summit was opened by Daniella Deli, Deputy State Secretary for Climate Policy at the recently-established Hungarian Ministry of Energy who highlighted “multi-level challenges” facing the energy landscape today. Due to these challenges, the focus has shifted towards energy security, however, she believes that sustainability is compatible with the recent shift in priorities and that both issues must go hand-in-hand. 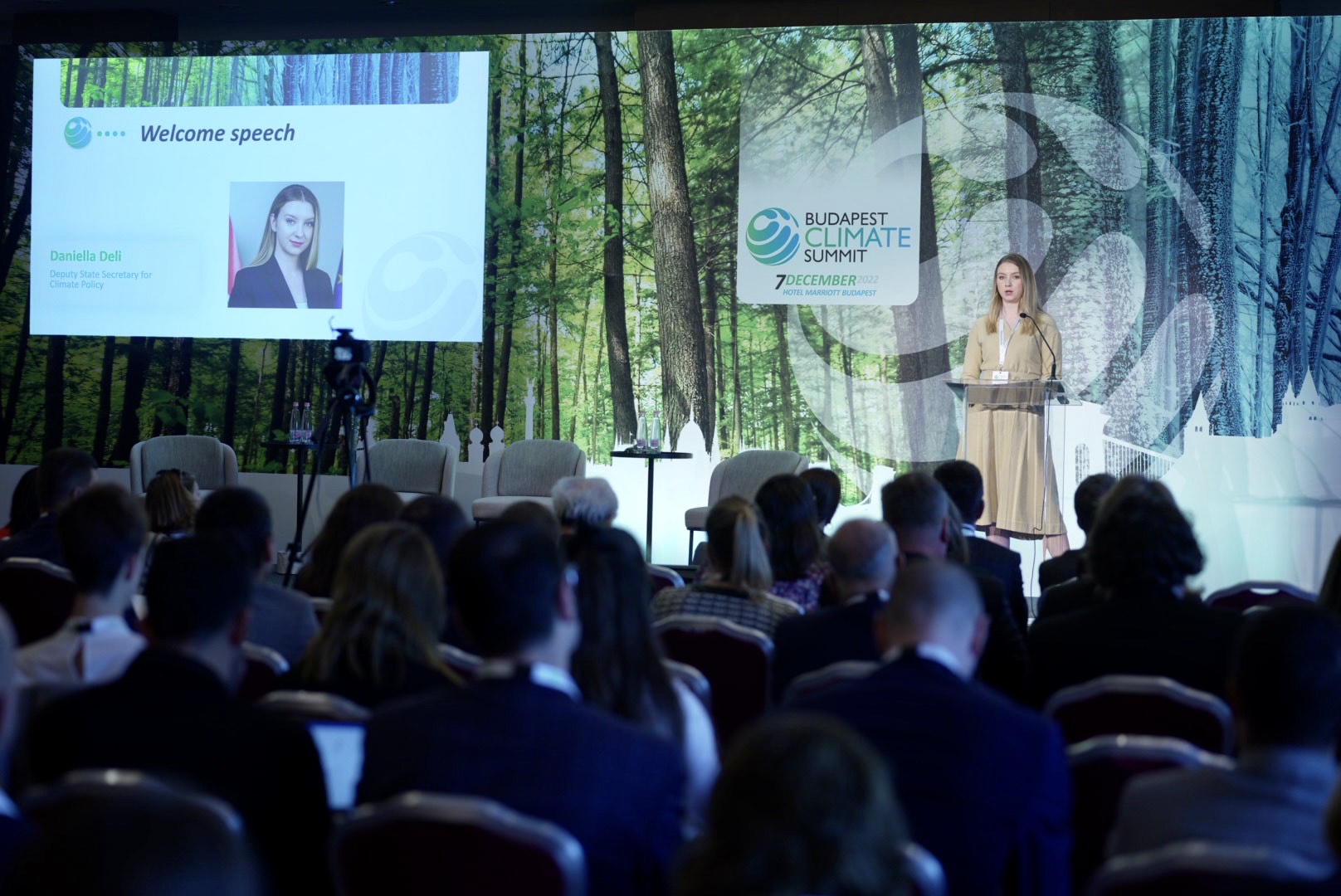 The European Commission’s Acting Director General for Climate Action, Clara de la Torre emphasized once again the importance of a Just Transition: “the EU believes in a climate transition that leaves no one behind”. In this regard, she reminded us that the Commission is proposing a new “social climate fund”.

As food waste is considered a major environmental problem, the CEO of Tesco’s Central European branch, Matt Simister teamed up with Andreas Beckmann, CEO of WWF CEE, to highlight the key issues and opportunities in sustainable supply chains in the retail industry, following the release of the Living Planet Report 2022 by WWF. Simister highlighted Tesco’s sustainability strategy and its food waste and supply chain targets. “We were the first business to independently audit and share our food waste data,” he recalled, welcoming also the transparency of Tesco’s supply partners.

Providing an industry-focused perspective, Eric Sievers, director of investments, ClonBio Group assessed the EU’s Just Transition strategy, highlighting that significantly more jobs are created in the biorefinery sector than in wind and solar, yet this is not reflected in the EU’s vision.

The first panel of the day saw industry and public sector leaders discuss the future shape of the energy system. All of them agreed that sustainability is particularly important when considering future generations. Taking into account the common challenges such as an underdeveloped electricity grid for renewable energy sources, it was also noted that the 2030 targets are unrealistic. Overall, it emerged that adaptation and openness are crucial.

Following the panel, Gábor Molnár, head of renewable business development of MET Group highlighted the importance of decreasing our consumption and the “profound impact” that the sky-rocketing prices are having on the economy and consumers’ choices. “The world has surpassed 1 terawatt (TW) of solar installed capacity level,” he said, “and more than 50% of the growth happened in the last 5 years.”

Presenting the current climate situation, Diana Ürge-Vorsatz, Vice Chair, Working Group III of the Intergovernmental Panel on Climate Change, highlighted the threat of high temperatures on agriculture and the immediate need for RES. “It is risky not only for those who own these companies but for the whole economy as it might create market instability and macroeconomic instability.”

Jeroen Starting, from ExxonMobil Hungary, mentioned the Houston hub as an example of the steps that ExxonMobil is taking in tackling the climate crisis: “By 2030, the potential to collect and capture carbon will be enormous, just to put it a little bit into perspective, it equates about 10 million passenger cars”.

Providing Shell’s perspective on the green re-shaping of the energy landscape, Mallika Ishwaran, chief economist at Shell, said that according to the company’s scenarios, the global COVID pandemic has changed the starting point of the energy transition and the individual responses of the country give an indication on how countries will respond to the climate crisis as well. On this note, Ishwaran said: “The energy transition is inevitable.” 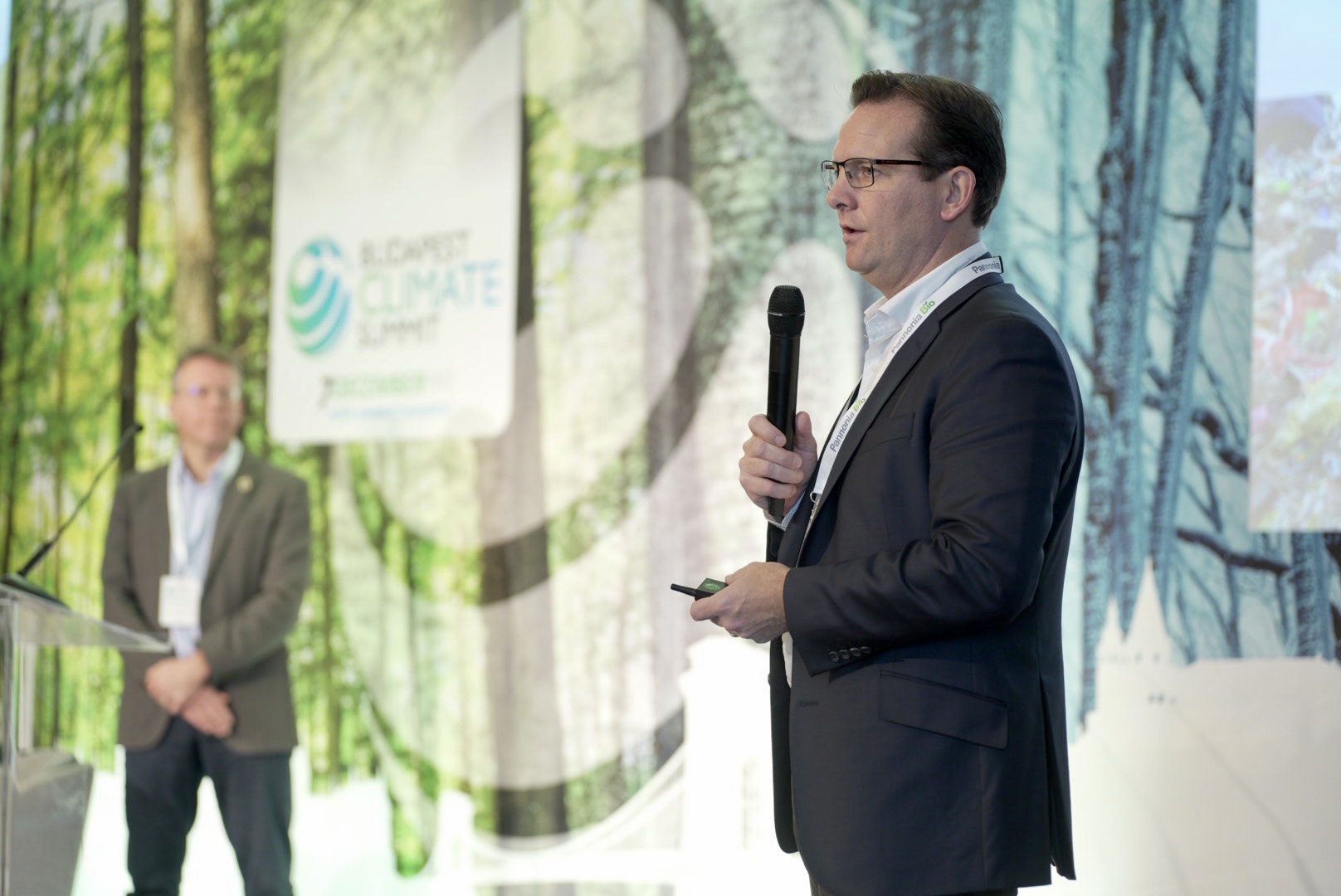 Turning to the role of the telecommunications industry, Vodafone’s external affairs director, Anita Orbán, recalled that 100% of Vodafone’s transmission system is powered by renewable energy, with the company’s support for a circular economy and plans to aid in the solutions in the energy and cost of living crises.

Barbara Botos, Hungarian Ambassador at Large for Climate, shared with the audience the outcomes of COP27 whose participants, despite the breakthrough agreement on loss and damage, “underestimated the geopolitical considerations in the process of making the initial targets.”

Presenting a first-hand perspective on tackling climate change amid a full-scale war, Ukraine’s Deputy Energy Minister, Mykola Kolisnuk reiterated Ukraine’s ambitions towards becoming an integral part of the European family and highlighting the increased acceleration of renewable energy penetration in the country.

During an expert panel on sustainable transport, Tesco’s Jim Whitehead discussed the company’s contribution to the sustainable transition, importing technologies widely used in the United Kingdom into the CEE region, including Hungary and the Czech Republic. Separately, experts also discussed the feasibility of green hydrogen and its future in the transport industry. In addition, Pannonia Bio shared the benefits of adopting biofuels in the industry, as well as Hungary’s competitive advantage in growing the biofuels sector.

A separate experts’ panel discussed sustainable finance during which major lenders such as representatives of the World Bank and the EIB shared their experiences in climate financing. In particular, EIB’s Alain Nadeau shared the bank’s new service in providing technical assistance to projects that may, for instance, have an inadequate implementation time. In addition, Eszter Zádori, partner at Dentons also raised the importance of a regulatory framework in financing green projects.

Julian Popov, a Fellow from the European Climate Foundation provided his insights into the relatively new area of climate, security, and military conflict. As part of his presentation, Popov highlighted that war has historically been a major driver towards accelerating renewables. Looking at today’s situation in Ukraine, a similar pattern can be noticed – “The war lead to a massive increase of renewable energy.”

Climate Leaders to Meet at the Budapest Climate Summit on De...