Held for the first time, the Budapest Climate Summit was attended by guests and speakers from a total of 21 countries, who came together to discuss how the green transformation of the economy is accelerating in the context of the COVID pandemic.

At the conference on October 9, leaders of key companies in Hungary and the region, high-ranking government and European Union and municipal officials, and renowned experts in the field discussed the domestic and international aspects of the green transformation of the economy in the light of the 2050 climate targets.

In a crisis, there is always the opportunity. In this, the speakers of the Budapest Climate Summit all agreed, emphasizing that the global economic slowdown caused by the coronavirus pandemic also provides an opportunity for national governments, companies and all of us to move towards a redesigned, sustainable and green path towards our climate goals.

Compared to other countries, Hungary is one of those that has reduced its carbon dioxide emissions the most in recent years, while the economy has also been growing steadily, government representative László Palkovics, Minister for Innovation and Technology, said in his opening speech.

“We support the European Union’s climate protection efforts, although we still have a long way to go, I am confident that we will achieve the 2030 and 2050 goals,” Palkovics told delegates.

The European Commission is a giving green issues a much higher profile and priority. Frans Timmermans, Executive Vice President in charge of the EC’s European Green Deal and its first European Climate Law to enshrine the 2050 climate-neutrality target said COVID, for all it was unwelcome, had created what might be a pivotal moment.

“The pandemic has provided an opportunity to find new solutions, to rethink the growth trajectory of our economy. We need to act now because doing it later will cost a lot more. We all need to work together to transform the economy into green,” he said.

Although the COP26 climate talks on the UN Framework Convention on Climate Change, scheduled for November this year, have been postponed due to the coronavirus, the United Kingdom, which holds the presidency of the climate summit, wants to take the lead. The net-zero target for 2050 can also be achieved by relying on renewables, the cost of which has fallen significantly in recent times compared to preliminary expectations, emphasized John Murton, the U.K.’s special envoy to COP26.

One of the cornerstones of the fight against climate change is how large companies, which are the largest consumers in the economy, are transforming their practices and contributing with a credible and consistent strategy to make Europe carbon-neutral by the middle of the century. The challenge of climate change directly affects all sectors.

“We are committed to significantly reducing our carbon footprint; in 2017, we were still responsible for 3.5 million tonnes of CO2 emissions, and we have now reduced this proportion by 35% in Central and Eastern Europe, where we have also reduced food waste by 66%,” highlighted Matt Simister, TESCO’s CEO for Central Europe.

Energy companies have a key role to play in putting the economy on a sustainable path, as they are responsible for a significant proportion of our global carbon footprint. Talking about how this can be done in practice, Attila Kiss, President and CEO of E.ON, said that in future it would like to focus even more on the needs of its customers, with whom they think about the future.

“We have no other planet, we have to solve the problems here. Climate protection and economic operation are not enemies of each other,” he said.

“Our task is to provide the country with safe nuclear energy and, at the same time, green energy from increasing renewable capacity.”

Transport is another sector where a major transformation is expected, as it is responsible for almost a third of Europe’s CO2 emissions, the conference was told, meaning its future is closely intertwined with the achievement of climate targets.

Andreas Klugescheid, BMW’s director of government and external relations, stressed the importance of the auto maker’s recent announcement that BMW will reduce its CO2 emissions per vehicle by at least a third and total CO2 emissions by 80% by 2030.

Can nuclear energy play a role in achieving climate goals? According to Pál Kovács, Secretary of State responsible for maintaining the capacity of the Paks Nuclear Power Plant, these goals cannot be realistically achieved without nuclear energy.

“Hungary can only achieve the set climate targets if a new nuclear power plant is built, which could prevent the emission of millions of tons of carbon dioxide,” he said, alluding to the Paks II project to add two more reactors to the country’s sole NPP.

In the afternoon of the day-long summit, the leaders of the National Bank of Hungary (MNB), the World Bank, the Asian Infrastructure and Investment Bank, international law firm Dentons and the Blue Planet Climate Protection Foundation discussed the most important issues of sustainable financing.

Secretary of State for Energy and Climate Péter Kaderják said that the upcoming non-refundable support system for residential solar systems will contribute to the fulfilment of the objectives of the Climate and Nature Conservation Action Plan, the details of which have now been worked out.

“It is already certain that people living in disadvantaged regions and smaller settlements will be able to apply. They will not be subject to the clearance of accounts,” he said.

Terhi Lehtonen, Finland’s Secretary of State for the Environment, also spoke at the conference, outlining the main points of her countryʼs climate protection strategy. 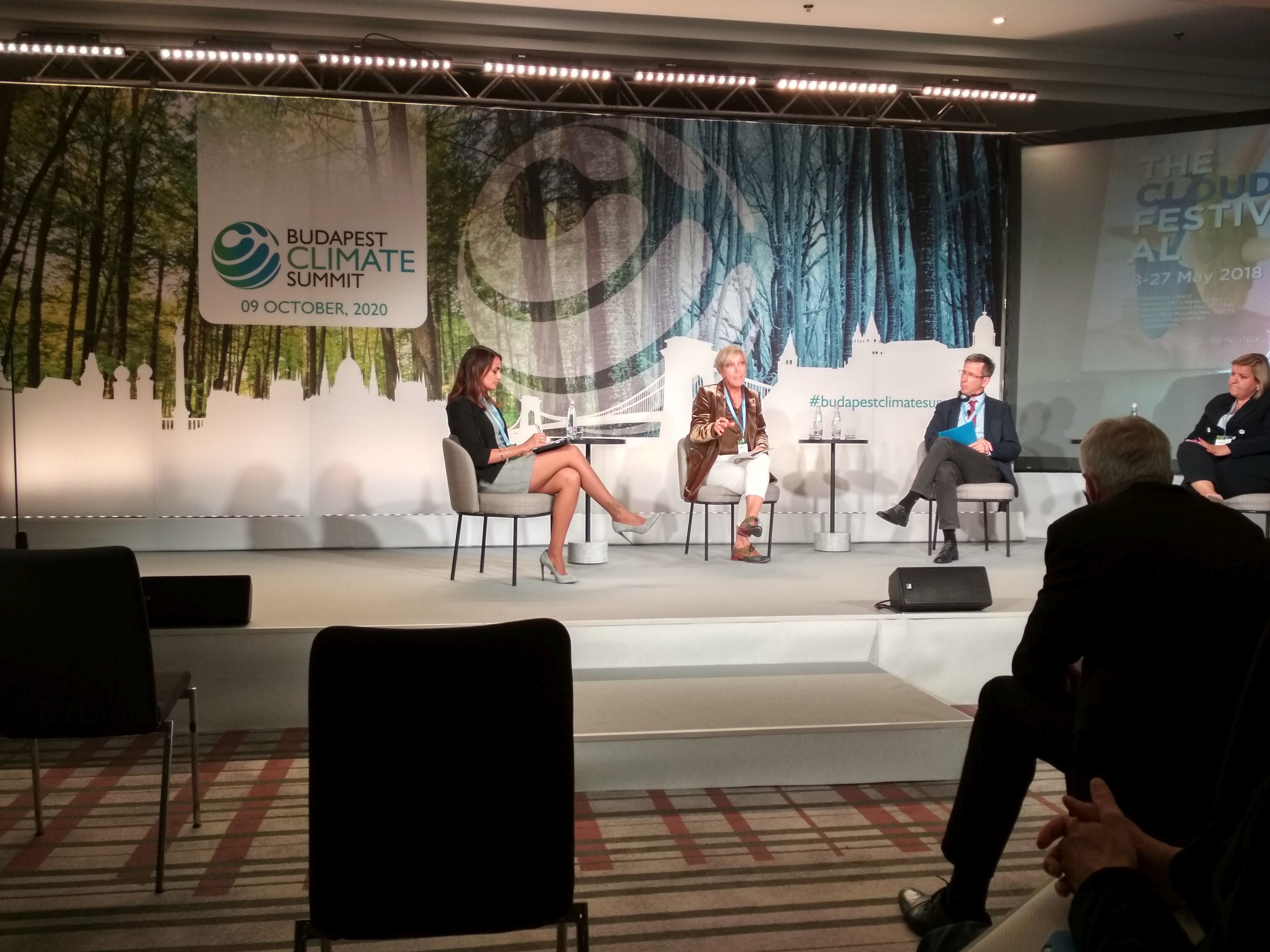 Finding the Key to the Future of Energy in Hungary

Industry Leaders to Discuss Future of Battery Sector at II. ...