Mayor of Budapest Gergely Karácsony is planning to set up a Budapest Global Council to institutionalize cooperation between the General Assembly of Budapest and businesses based in the capital, the mayor announced during an American Chamber of Commerce in Hungary virtual business forum.

Speaking on October 27, the mayor also outlined his plans for making the capital greener, more sustainable, a constructive place for businesses and a healthier environment for residents.

The mayor asked that, once the general assembly has established the institution, AmCham and international businesses based in Hungary assist in the creation of strategies that are mutually beneficial for the city and the business landscape. Budapest has to become the main location of the services sector and industries that deliver added value to the business community and people alike, the mayor added.

During the online video conference, Karácsony addressed a handful of important issues relating to the workings of the Hungarian capital.

“Our aim is to create a greener Budapest with more solidarity,” Karácsony promised.

He said that he trusts that the capital’s economy will be able to revive soon after the ebbing of COVID-19, while acknowledging how grave the current situation is. While there are plenty of steps needed to better the capital in general, Karácsony said the situation is difficult as his office faces funding difficulties.

Although his office proposed increasing the business tax to help the city bear its burden, the government had rejected the idea and business tax will in fact drop by 22%. Altogether, he said that the city’s central budget is losing out on 25% of its incoming funding, and the municipality may need to tap into its emergency reserves.

Every year, diseases relating to respiratory illnesses caused by air pollution mean approximately 3,000 people die in the capital. The mayor, therefore, is a supporter of creating a greener and more sustainable environment in Budapest; however, he noted that he is aware of the conflicts that such a transformation may cause.

He said that with the beginning of his term as Budapest mayor, a significant change in ideology arrived in the mayor’s office, especially in regard to green spaces.

“We have prevented the felling of more than 100 trees,” the mayor said, adding that he is committed to creating more green spaces.

Budapest is planning to develop public transport to drastically reduce private car congestion. During the first half of the year, when the coronavirus pandemic reached Hungary and many people shifted to working remotely, both the public transport and congestion caused by private cars dramatically dropped, the former to 15% of the normal load, the latter to 20%, the mayor noted.

By the time of his speech at the AmCham forum, numbers were back to 80% and 90% in the case of public transport and private cars, respectively. Data from the mayor’s office has shown that blue-collar workers are virtually 100% back to using public transport, while white-collar workers still work from home if they can, which means at this point means traffic in the capital city still lags behind the pre-COVID-19 period.

For a greener and more sustainable Budapest, the mayor’s office is eyeing strengthening both the infrastructure of public transport and introducing more possibilities for micro-mobility to offer viable alternatives to urban dwellers to abandon private cars as much as possible in the future.

“Budapest cannot stand more car traffic,” the mayor said, suggesting that people should walk or ride bikes if the distance and time allows. The Budapest mayor himself has often been seen travelling around in the city riding his bicycle. “For our best, we need to gradually reduce congestion,” the mayor emphasized.

To achieve this, Karácsony said that traffic arriving into the agglomeration needs the biggest support, chiefly via the creation of parking spaces at the main public transport and private traffic junctions, to encourage people to use public transport in the downtown area.

He emphasized that such tasks are beyond the scope of his office; it is the Hungarian state that can make investments of this sort. Karácsony added that his office is aiming to further develop tram lines and encourage zero-emission transport.

In efforts to make switching to public transport more attractive for those who arrive at the outskirts of the city behind the wheel of their cars, another step would be to introduce a quick, efficient, simple and customer-friendly electronic ticket purchasing and monitoring system.

Karácsony said that the tender that had been launched in 2014 to establish such a system never developed into a working feature. Instead, he said, the tender caused damage to his office amounting to tens of billions of forints.

Sustainability is a feature that can be added to public transport, too. The Center for Budapest Transport (BKK) has created a solar park that can charges 40% of the electric buses used by the operator of the capital’s public transport. Karácsony said that this investment will break even in only four years, and the capital would like to see the installation of similar systems.

He added that Budapest has a significant geothermal reserve under its streets that, if tapped into, could alleviate the city’s dependence on power from fossil fuels, leading to the reduction of CO2 emissions. Related investments would break even in a decade, he said; however, funding for such projects are scarce.

The mayor’s office is also working on a strategy for introducing technologies to Budapest, to kickstart the capital on the road of becoming a smart city.

“We are slightly lagging behind, we are in baby shoes in this regard,” Karácsony admitted. He said his office is planning to systemically collect all the city-related data in one place and use analyses to make life in the city easier. He said that such data should also be made available to the wider public to increase transparency.

He also touched upon the regularization of Airbnb, the San Francisco-based vacation rental online marketplace, which he tagged as an important social and political discussion that needs just decisions. It is the question of tax optimization to make taxes relating to vacation renting of homes just and fair, he said. 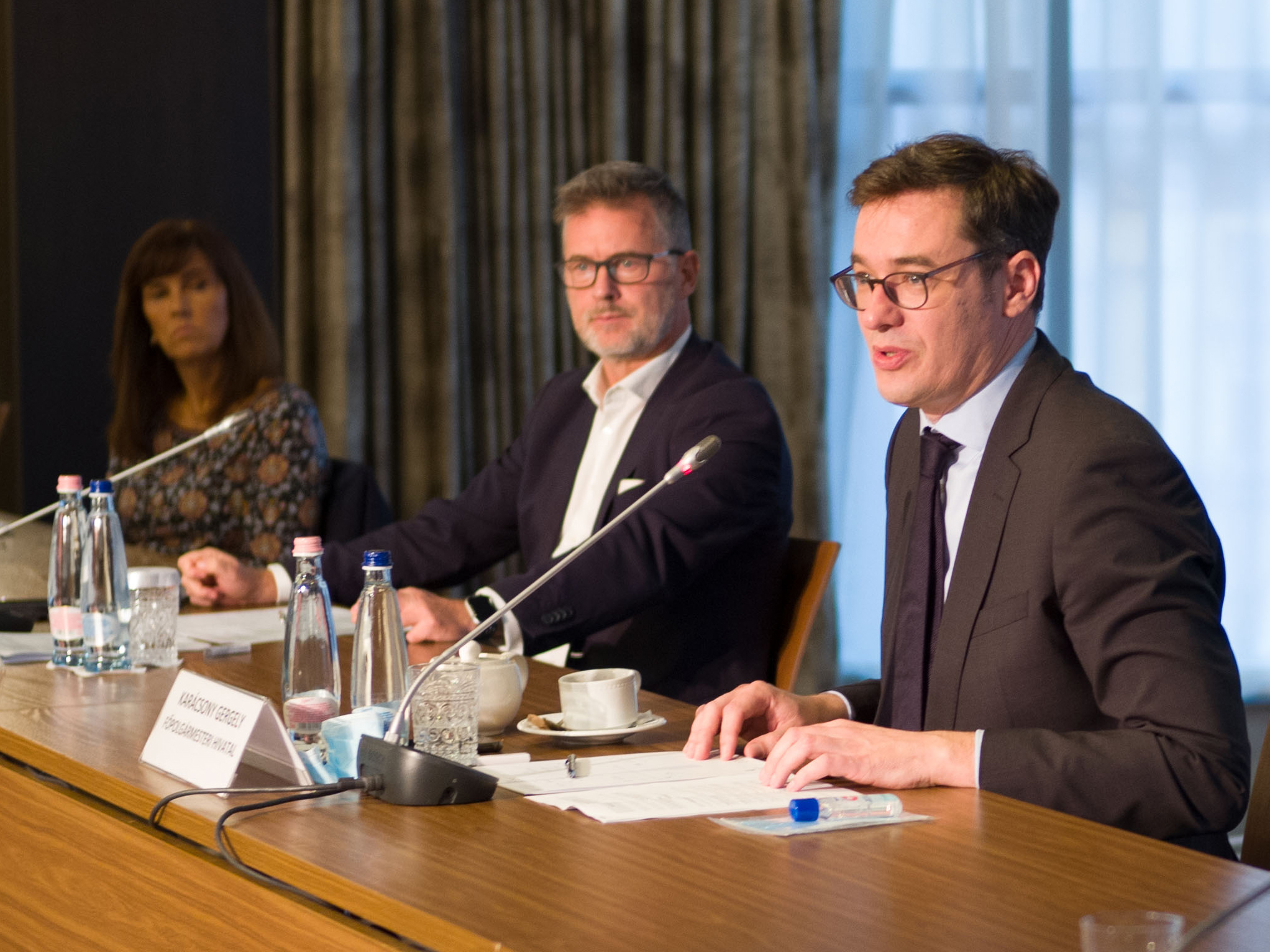