This year's Atlas Award went to Dimitry Ljasuk, founder of Pozitivo Digital, recognizing his ethical, sustainable, and creative (ESC) approach, and his company's commitment to shaping a better world.

The award was presented to Ljasuk on October 6 in Haris Park. The ceremony hosted some 120 guests from the Hungarian business community.

ITL Group organized the event in cooperation with Mvük.

János Horváth, CEO of Mvük, opened his speech by inviting guests to donate to Edisonfund, cooperation of Mvük & Bridge Budapest. The purpose is to raise HUF 10,000,000 to support foundations serving children with special challenges. Guests' donations will be 100% spent to cover the charity's operating expenses.

Silvia Merighi, founder of MSP Group, Bernardino Pusceddu, founder of Comagro Sardo, and Omar Balducci, sales director Central and Eastern Europe Lucart Group and Lucart spokesperson, supported the organizers during the creation of the events for the community and the whole communication campaign for 2022.

"Out of several dozen potential winners for this award nominated by the public, we are proud to present the five finalists for the Atlas Award 2022. As a jury, we were amazed by several candidates and the fact that somebody in the business community has chosen all nominated candidates as a "good example" is already a big success. But every competition also needs a winner... and therefore, big applause to the finalists: Cliff Dicken von Oeinger, Zoltán Gazsi, Dimitry Ljasuk, Gréta Nagy, Giacomo Pedranzini," said Alessandro Farina, CEO of ITL Group.

Ljasuk, the winner of the award was born in St. Petersburg (Russia), to a Hungarian mother and Ukrainian father, from the age of one, he lived in Hungary: in Tatabánya, Pilisvörösvár, Karcag, Kisújszállás, Tiszafüred, and Tiszaörvény. He believes that today's modern man has been distancing himself from nature, so he wants to bring them together through his films. He makes his films according to his motto "Notice it, discover it and care for it".

As he explains on the stage during the award ceremony, his love for the Tisza comes from his father, who used to take him fishing regularly.

"It is like a resting place for me; it constantly recharges me and helps me find myself. But it's not enough to receive from the Tisza; you also have to give. That's why this is also one of my main messages; I don't just talk about it; I also take action: I participate in and organize waste collections and everything that can be useful for the lake and the river. Hungary has many beautiful places, and Lake Tisza is an actual little jewel box! That is also why my slogan is used in my films: Notice it, discover it and take care of it!"

After the revelation of the winner, the floor was taken by one of the youngest guests of the night, Alberto Farina, 12 years of age, Alessandro's son, representing the next generation to whom we will hand over the planet. He thanked all the sponsors and reminded the room that "we are not alone". 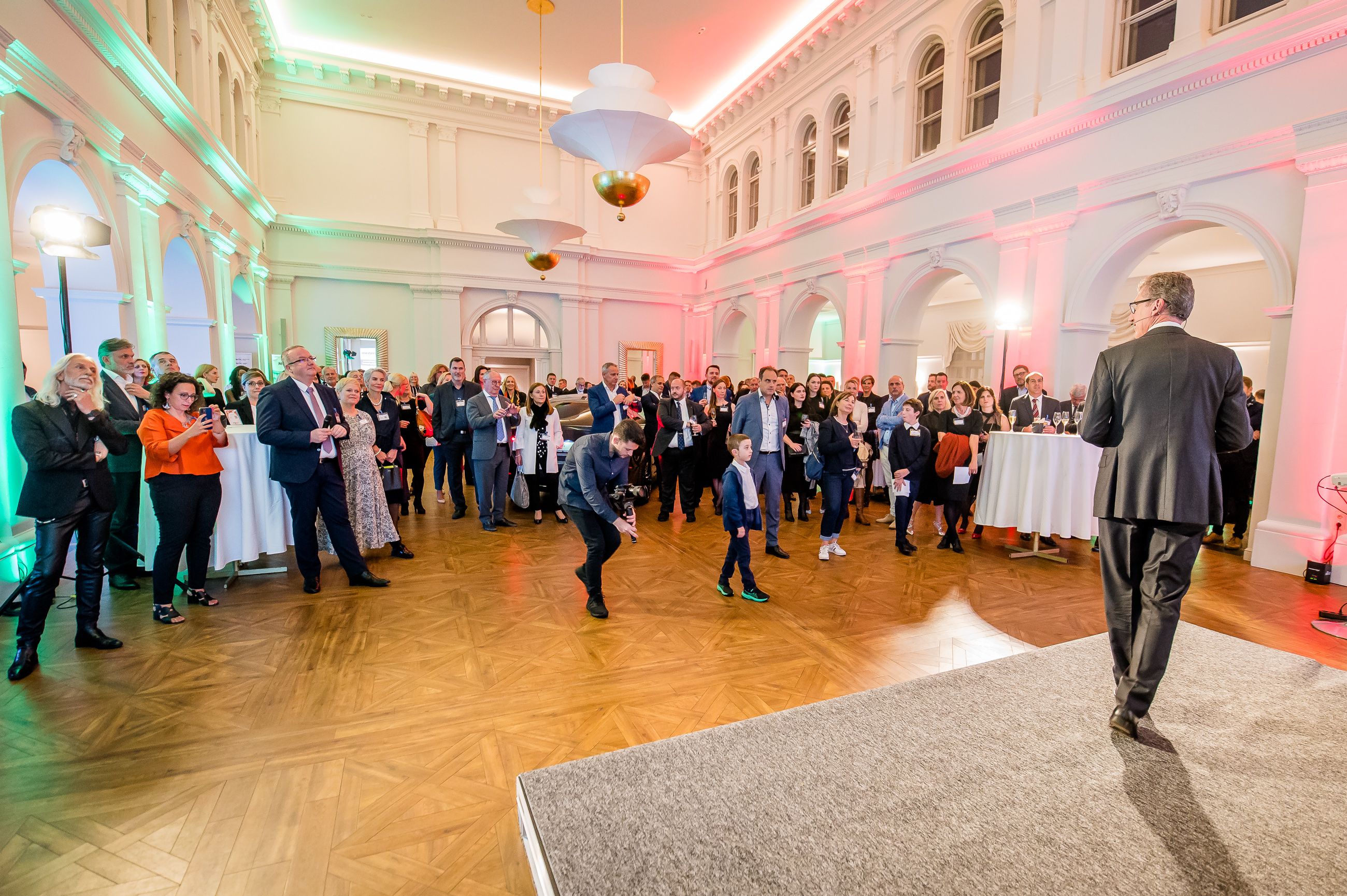 Before inviting the jury on stage, Alessandro Farina said that leadership works well when also the team is excellent.

"A special mention, therefore, goes to Luigino Bottega and the whole team with special thanks to Irene Pepe and Szilvia Szlavitsek. They supported me since the beginning of this adventure. A friend and a 'free thinker' who also wrote a very enriching book about life and values. Guests could find a copy of  How to win at the game of life at his corner, near the skill development platform "Accelium Hungary", also partner to the event," he said.

He hanked those who shared the award's values and with whom we are creating a table of discussion on the present and future projects: Mvük, EuCham, Unindustria Ungheria, Rotary Club Budapest-City, Bátor Tábor, and FirstMed.

"An award cannot be an award without a prize, and we wanted it to be a fine masterpiece," explained Farina, before leaving the floor to Veronese, author of the statue.

In the Atlas Award statue, the mythological Atlante and Leonardo Da Vinci's Vitruvian Man join forces in holding the World; in this metaphor, past and present become one in the future perspective of building a better world for the generations to come. Two gems complete the work of art: an emerald shines on Hungary, and a rubin shines in the heart of the man.

Being creativity one of the three pillars, the event's guests had the opportunity to pose for Nastako, who sketched unique illustrations of them next to the award.

Looking at the room, Farina told the audience, "The business community is evolving thanks to you; join us! Together for a better world."