“Between Hell and Paradise. The Enigmatic World of Hieronymus Bosch” is an exhibition of work by the Dutch painter who lived and produced in the late Middle Ages and proves that Budapest’s Museum of Fine Arts continues to host outstanding artistic events.

The show offers almost 90 works of art that embody Bosch’s instantly recognizable style and worldview. It is the largest exhibition of his art in Central Europe and one of the most significant Bosch exhibitions of the last half-century.

Some of the world’s greatest museums, from the Metropolitan Museum of Art in New York to Madrid’s Museo Nacional del Prado, have lent works that include “The Last Judgment Triptych” and “The Ship of Fools.”

Very little is known about Bosch’s life, other than that he’s believed to have lived from around 1450 to 1516 and was born in ’s-Hertogenbosch, the capital of North Brabant in Belgium. He was one of five sons of Anthonius van Aken (himself the son of an artist), four of whom were painters.

Art historians assume, reasonably enough, that his father or one of his uncles taught young Hieronymus to paint.

Bosch spent most of his life in ’s-Hertogenbosch and, aged 13, may well have witnessed the fire that devastated the city in 1463. Art historians speculate that seeing the blaze inspired the hellfire that features so prominently in his work.

Somewhere between 1479 and 1481, he married Aleyt Goyaerts van den Meerveen and moved to the nearby town of Oirschot, where she owned a house and land.

Apart from these bare facts, the main thing we know about Bosch is that, unless his seeming faith had more to do with expediency, he was deeply religious. 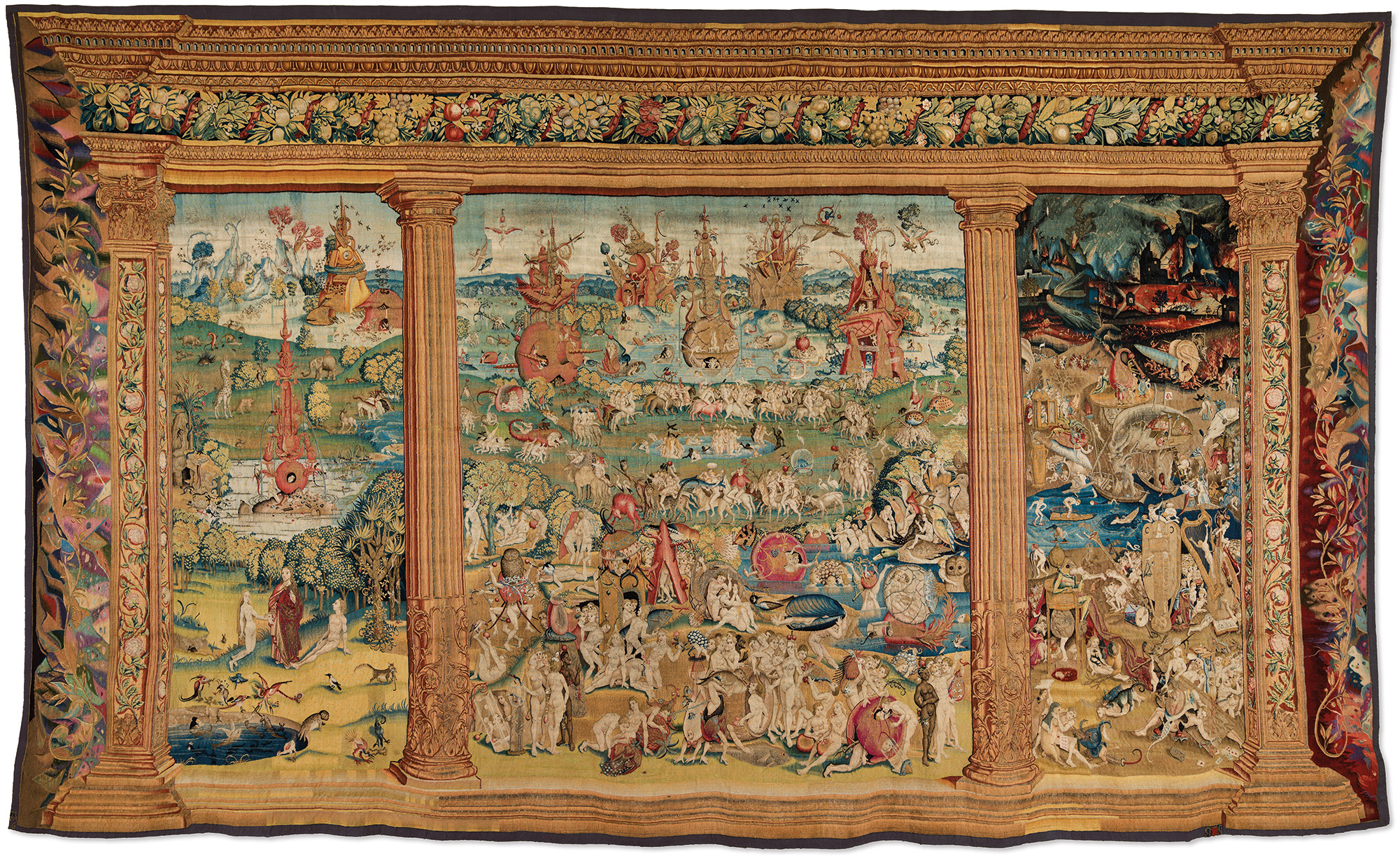 We also know that his work was popular in his lifetime, collected throughout the Netherlands and as far afield as Austria and Spain. It was also widely copied. Clearly, Bosch’s art struck a chord with the public, even if it seems exceedingly strange to us modern viewers.

With this in mind, the exhibition at the Museum of Fine Arts does as much as possible to place Bosch’s work in the context of the resources art historians can be reasonably sure he drew upon. These include literary and theological works and Franco-Flemish and Utrecht miniatures.

Alongside Bosch’s paintings and drawings, the exhibition also includes work by painters who came before him and who he might have learned from, as well as pieces produced by his students and those who followed him.

Despite this being a worthy endeavor, I think I’ll be ignoring all the context when I visit the exhibition. For me, not knowing what inspired Bosch makes the work all the more powerful. I suspect I’m not alone.

The work on display at the Museum of Fine Arts revolves around themes including the nature of human existence, the choice between indulging one’s desires or not and between virtue and sin, and questions of faith and truth.

Divided into seven sections, the exhibition begins “On the Boundary of Two Ages,” the transition period between the end of the Middle Ages and the Early Modern Period when Bosch was painting. From there, we climb on board the “Ship of Fools,” representing human weakness and sin.

Lovers, if that’s the right word, of Bosch’s most creepy art will surely romp through the third section of the exhibition, cheerfully titled “The End of Time.” This includes major works such as the “Last Judgment” as well as recently discovered drawings. 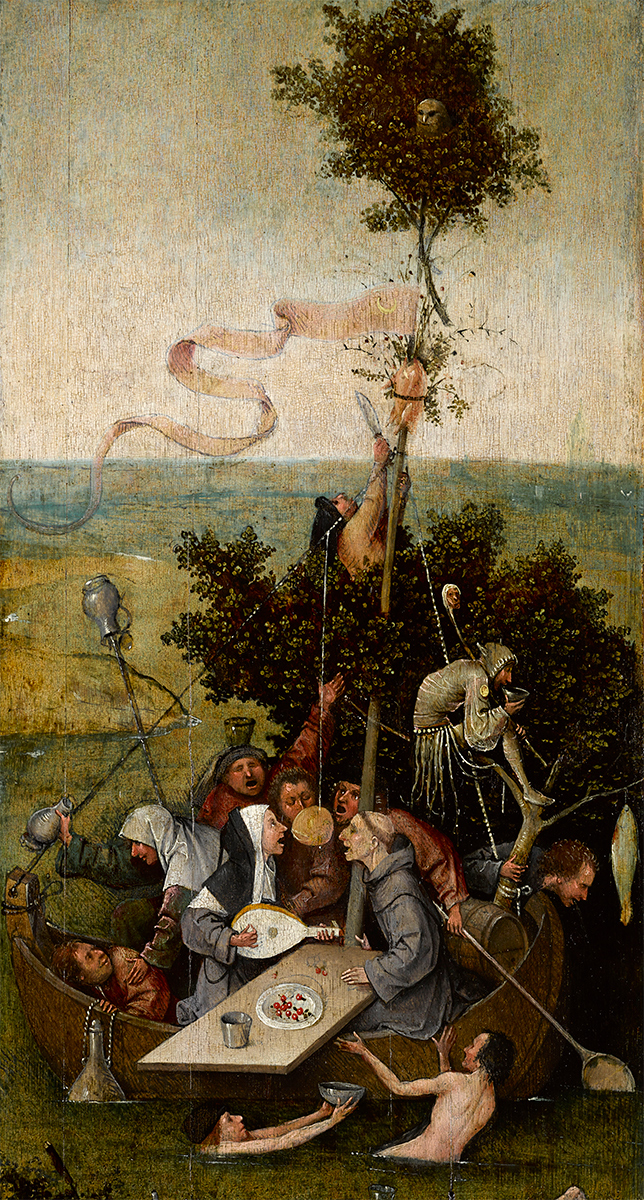 After this, the fourth section, “The Life of Saints,” may well come as a relief. Bosch knew the orthodox versions of the lives of saints such as St. John the Baptist, St. Christopher and St. Antony intimately and used them to suggest how humanity can keep its faith even in the darkest times.

Following on from the “Jesus” section is one named for the painting known as “The Garden of Earthly Delights,” loaned by the Prado in Madrid. This is perhaps the most thought-provoking and certainly beautiful part of the exhibition.

In recent years, art historians have delved deeply into the meaning of “The Garden of Earthly Delights,” suggesting an ironic dimension to the central panel that depicts delights and the right panel, which shows hell. It has also been mooted that one of the reasons Bosch’s work appears so cryptic is because he was secretly attacking certain social, political and spiritual targets.

While it’s interesting to know this, it’s much more satisfying to study the paintings without speculating about his intention. This, for me, preserves their mystery and universality. Especially now, with what’s going on across the border from Hungary.

This makes the idea of the final section of the exhibition, which looks at the impact of Bosch’s art on successive generations, not especially interesting to me. Particularly as it appears to focus only on the period when he was alive and then immediately after his death.

Because of this narrow focus – and, not having seen it yet, I could be wrong – the exhibition doesn’t appear to consider the relationship between Bosch and Spanish surrealist Salvador Dali. It’s argued that the rock formation in the shape of a face in Dali’s 1920 “The Great Masturbator” was inspired by a similar form in “The Landscape of Earthly Delights.”

The exhibition also doesn’t acknowledge writer Michael Connolly’s fictional detective Hieronymus “Harry” Bosch, who seeks justice on LA’s mean streets in a milieu that can be paradise or hell on earth, dripping with temptation and sin. A criminal omission.

“Between Hell and Paradise. The Enigmatic World of Hieronymus Bosch” is open now. Find out more at www.mfab.hu.

This article was first published in the Budapest Business Journal print issue of April 22, 2022.

Life’s A Beach, Even in Hungary: Martin Parr at the Budapest...